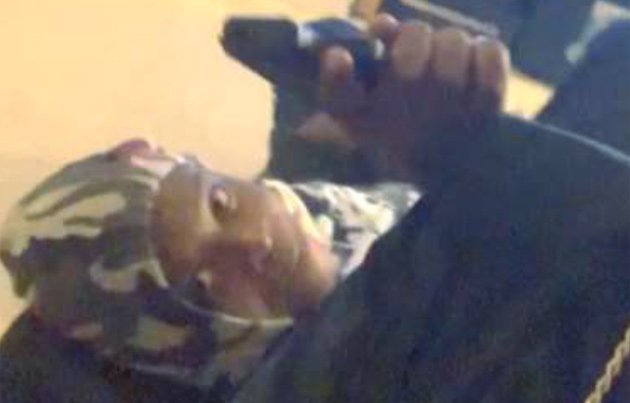 Phillips in video on his seized phone.

A Malden man who admitted his role in a north-of-Boston guns and drug ring was sentenced this week to 6 1/2 years in federal prison, the US Attorney's office in Boston reports.

Phillips "PHON C" Charles, 22, was swept up as part of a federal and local sweep dubbed ""Operation Street Sweepah: Kings of Belaire," in part, because Boston English, in part because the violence-happy leaders of the gang also loved to swill Belaire champagne.

In April, Phillips pleaded guilty to one count of conspiracy to manufacture, distribute and possess with intent to distribute 28 grams or more of cocaine base, fentanyl, cocaine, marijuana and other controlled substances and one count of conspiracy to possess firearms in furtherance of a drug trafficking crime. The two leaders, Jaiir Coleman and Christina Bernbaum have also pleaded guilty to their role in drug and gun sales and gunfire from the North Shore to Roxbury.

Phillips was arrested on the federal charges while he was on bail on a state drug-distribution charge. According to the US Attorney's office:

While on pretrial release from Malden District Court and Middlesex Superior Court for an October 2019 arrest involving cocaine base (crack cocaine), for which he later served a probation sentence, he continued to conspire with others involved in the conspiracy to distribute large quantities of controlled substances. Members of the conspiracy also possessed firearms, including multiple firearms with “selector switches” that convert firearms into machine guns, to protect the drug trafficking operation and target rival gang members. Specifically, while on pretrial release, Charles was involved in the filming of a publicly posted music video in which Charles was shown along with numerous firearms, including a firearm with an attached “selector switch,” one of which he was shown handling and pointing at the camera. Videos and text messages recovered during the investigation revealed that Charles historically possessed a number of firearms.

Additionally, while still on pretrial release in October 2020 and following a brief encounter with a rival gang member, his girlfriend and their one-year-old child at the Square One Mall in Saugus, Charles pursued the victim and his family and fired at least seven rounds into their vehicle. Charles remained on pretrial release until he was arrested and charged in state court with possessing a firearm in December 2020.

In an unusual move, both prosecutors and Phillips' attorney agreed a sentence of 78 months was appropriate punishment for his crimes.

Phillips' attorney said his client was the product of a broken home, whose mother sent him to stay with relatives in her native Haiti when he was 11, which only worsened his situation, in part because he was routinely beaten in school for being unable to speak French. He eventually returned to the US - as a 17-year-old ninth grader, dropped out of school, became a pothead, developed serious lung problems and then got addicted to oxycodone, which he was initially given to reduce the pain from having gotten shot in the back - by a bullet that is still lodged there.

Neighborhoods:
Malden
Topics:
Crime
Ad:
Like the job UHub is doing? Consider a contribution. Thanks!

Sand doesn't melt
A Connecticut Yankee in King Storrow's Court
Orange Line was the little train that could, 'til it got near Oak Grove, now it seems dead for good
Champagne-swilling Malden party girl admits she was also a gun-packing crack dealer
The new CharlieCard vending machines are in
Guess we know who won't be signing up for the vaccination lottery