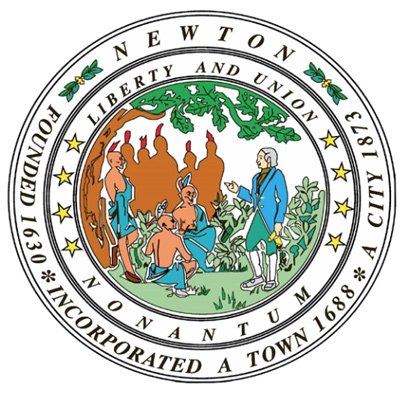 A Newton city working group has concluded its time to change the city seal, which now shows British missionary John Eliot lecturing the local Native Americans in the 1600s on why they should convert to Christianity.

Mayor Ruthanne Fuller says she will ask the City Council to formally approve the start of work to change the seal, which would include finding a graphic designer to replace the current scene with something that is not racist and relevant to the modern city and create a seal that would work well on everything from documents and vehicles to trash cans.

Natick is also considering changing its town seal, which also has a representation of Eliot lecturing Native Americans.

In its report, the Newton working group explained its conclusion that it's time to retire the current 1865 seal.

Pictured is a Colonial authority telling a people that their ways of living and worshiping are wrong. Certainly, most Newtonians would not want a symbol of cultural arrogance to represent their City made up of many faiths and cultures.

This scene lacks historical context and accuracy, glorifies the erasure of Indigenous culture, and is disrespectful to the Massachusett Tribe, on whose land we live

In the period after the Civil War, images of Native Americans were popular as symbols of American identity separate from Europe. Art and fiction portrayed Indians as "noble savages," a "vanishing" people to be remembered with reverence, rather than as contemporaries with claims to land and rights of their own. Newtonians’ choice of a scene from 200 years earlier may also have reflected their pride in the city’s long history.

The working group also concluded that the word "Nonantum" should be removed, because that referred only to a small village of "praying Indians" that Eliot started and which only lasted five years until the residents went up river to found Natick. And that village is not even in the same place as the current neighborhood of Nonantum. A better choice might be "Quinobequin" (the Massachusetts name for the Charles), or "Cohannet," what the area was called before 1864, according to the working group. Also, all the founding dates should be changed to read "Founded in 1630 on Massachusett land."

The working group was meh on whether or not to replace "Liberty and Union," which might have been more relevant in the Civil War than it is today.

Neighborhoods:
Natick
Newton
Topics:
History
Ad:
Like the job UHub is doing? Consider a contribution. Thanks!

Just change the seal quickly, and change it quietly. This need not be liberal suburbanite attention whoring.

A working group made a report

and you made a scene.

I didn't see anything about blaring this from the rooftops. But, even if they had -- this seems like exactly the kind of thing where you'd want a citizen participatory process.

...with an apple dangling above his head?

Only If Milton Changes Their Seal...

should be an image of Lucifer -

Hurled headlong from th'ethereal sky
With hideous ruin and combustion down
To bottomless perdition, there to dwell
In adamantine chains and penal fire

They could possibly borrow something from William Blake. Great stuff.

Just a giant image of a Fig Newton, its namesake cookie. It would still beat the seals design-wise of places like Billerica, Ashfield, and Southborough, whose designers seemed to just phone (or more likely, telegraph) it in when ordered to do so by the legislature in 1899.

Let's create a scene by changing the seal. But don't worry , the progressives in Newton and Natick have no intention of changing the structure of their zoning to include housing that will include more people of different incomes and races.

Ding ding ding! That's what makes these gestures irritating. It makes them feel better but achieves nothing.

The Nicer The Suburban Neighborhood...

(Also holds true for every other town in Vermont, the Berkshires, Hampshire County MA, and Litchfield County CT).

Do you think it's *bad* to change the seal?

Actually curious about this.

"Liberty and Union, now and for ever, one and inseparable."

Closing words of a famous Daniel Webster speech in the Senate in 1830. Webster was responding to a Senator from South Carolina, who claimed that states should have the right to nullify portions of the Constitution within their borders, if they disagreed with them.

Somehow it seems as relevant today as it did in 1830.

(The interior of Faneuil Hall is dominated by a huge portrait, painted in 1850, purporting to show Webster's speech on the Senate floor; but many of the people shown in the painting were not actually present for the speech.)

I was kind of surprised by that part of the report

Where they said they had no idea how that motto might have been relevant to Newton. Even without knowing about Webster's speech (which you just educated me on), I mean, think: 1865, bloody civil war coming to an end, a northern city, what do you think the relevance might have been?

Change John Elliot to Emily Norton lecturing the Native Americans, who can be changed to Bostonians, being lectured on redevelopment plans for the Gazza Public Works garage when Newton seems to look the other way on taking care of their flooding / filled wetland problems.

I read somewhere that it's an alternate form of "Kennebec". Some mapmaker in Europe, unfamiliar with the geography of New England, put the label on the wrong river.

If it's an error, it's a long-established one

For example, Quinobequin Road follows the Charles River bank in Newton for about 2.5 miles.

They mean where they mean now. It would be a brand new error to change either one.

Circular in Algonquin language
Charles River could fit that description.

And that acknowledgement means the land of the town will be given back to the heirs of that people, right?

isn't that Taunton, not Newton?

The reporting from the

The report from the working group contains a word cloud about Newton's identity.

Some of the fine print is hilarious, however it is disappointing to see it includes "big" but not "fig".

I'd be more impressed if Natick and Newton built low cost housing. This is exactly what Robin D'Angelo covers in "Nice Racism".