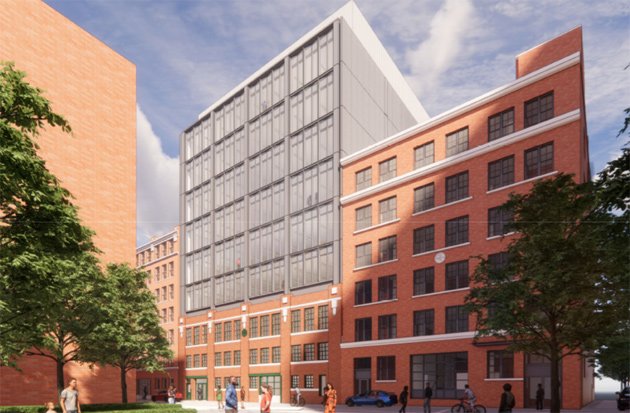 Rendering by Perkins + Will.

The owner of a long vacant and boarded up former Boston Wharf Co. building at 7 Channel Center St. has filed plans with the BPDA to replace it with a nine-story building aimed at Boston's burgeoning research-and-development market.

7 CC 73 Owner of Palm Beach Gardens, FL, which bought the building for $12 million in 2020, says that the building's current facade, featuring one of the round BWC logos applied when the building went up in 1914, will be "rebuilt in kind" over the new building's first three floors, with a more modern glass-and-metal face rising above that for six floors.

The proposed addition will be designed to delineate the new work from the existing structure while still maintaining a modern industrial aesthetic which is consistent with similar projects completed within the Fort Point Channel district.

The filing does not state what sort of R&D the building will be aimed at. Although most of Boston's new R&D spaces are being built for life-sciences companies developing drugs and the like, the BPDA has seen some proposals that are specifically aimed at non-biologic R&D.

The proposed building, with roughly 99,500 square feet of space, would have no on-site parking; workers and visitors would use spaces in the nearby Channel Center garage.

The ground floor would have room for a retail tenant. The filing says that the building will be a boon to the neighborhood economy because R&D generally requires workers to be on site, so they will be circulating around the area, going to local restaurants and shops.

The site has long been included in the overall plans for the seven-acre Channel Center - a set of two rows of buildings between A Street and Medallion Avenue that Beacon Capital Partners began developing more than 20 years ago. Although past owners of the current building generally just left it alone and vacant, the current owners say past plans have long referenced its demolition, dating to a Boston Landmarks Commission decision in 2001 and a "memorandum of agreement" signed in 2002 by the then owners, the landmarks commission and state historical and environmental officials.

The company hopes to begin 18 months of construction in early 2023.