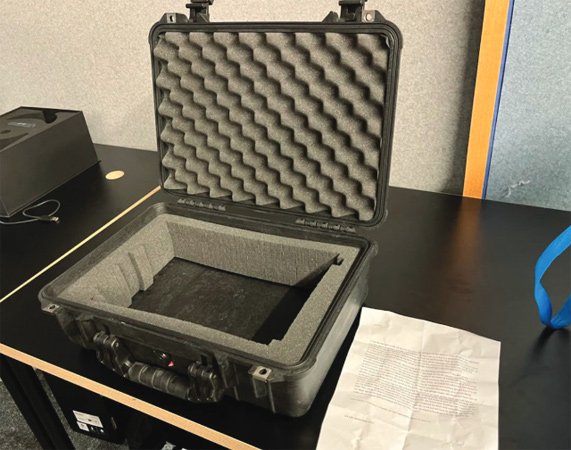 The case and note, showing no sign of damage, in photo filed in court.

A Northeastern new-media manager was arrested today on charges he concocted a story of a bomb going off in his lab last month - which led to the shutdown of the building and the surrounding campus - and that he wrote the alleged terror note, which blamed Mark Zuckerberg for unleashing a horrifying metaverse, just a few hours earlier on one of his lab's own computers.

Jason Duhaime, 45, new technology manager and director of Northeastern's Media Studio, was arrested in San Antonio, TX, where he continued to live even as he worked at Northeastern - he would sleep in his office on trips here. He was formally charged with conveying false information and hoaxes related to an explosive device and making material false and fictitious statements to federal investigators.

According to an affidavit by an FBI agent on the case, investigators suspected something odd going on almost as soon as they arrived at Holmes Hall on the night of Sept. 13 after Duhaime called 911 to report an explosion. The case that Duhaime said had exploded "did not bear any marks, dents, cracks, holes, or other signs that it had been exposed to a forceful or explosive discharge of any type or magnitude," the affidavit states. The alleged terror note inside, which complained about Mark Zuckerberg and his "meteverse" (sic), "bore no tears, holes, burn marks, or any other indication that it had been near any sort of forceful or explosive discharge."

Duhaime himself showed no signs of being hit by the "very sharp" projectiles he said had burst from the case - until he rolled up his sleeves to reveal "several small, superficial marks or bruises on his lower forearm," the affidavit continues, adding that his shirt itself showed no signs of rips or other damage.

The affidavit states the evidence was at odds with with what Duhaime told investigators, who talked to him at Beth Israel Medical Center, where he was brought for treatment. He claimed that a student helped him bring two Pelican cases up from a mail room on the first floor of the adjoining Meserve Hall the media lab on the third floor, of Holmes Hall and that he brought them into a storage closet, closed the door and opened one of the cases without even turning on a light:

I unlock [the Subject Case] ... and I open it up. And as soon as I opened it up, all this energy and, like, these things come flying out. And I had a long sleeve shirt, and they flew up underneath, basically, and hit my arm. The case went up and then it came down.

He later said he could feel "all this freakin' air pressure" as the case emptied.

DUHAIME then picked up the Subject Case, brought it into the Lab, and placed it on a table. According to DUHAIME, he then opened the Subject Case, discovered the Letter inside, read a portion of the Letter, and then placed the Letter on the table. He instructed Student #1 not to read the Letter because it contained threats. He called 911 and his supervisor shortly thereafter. ...

The ]Joint Terrorism Task Force] Agent told DUHAIME during the interview that it was a crime to knowingly make false statements to a federal agent. DUHAIME said several times that he was being honest, at one point towards the end of the interview saying, "I'm telling you the truth, the whole truth, and nothing but the truth so help me God." DUHAIME was released from BIDMC shortly after the interview ended.

The affidavit continues Duhaime's story was also at odds with what the student told an agent:

Several of DUHAIME's statements to the JTTF Agent are inconsistent with Student #1's recollection of events. First, DUHAIME told investigators that he moved the "Pelican" cases into the Useability Lab (a locked lab space adjacent to the mail area) on September 12th or 13th so they would not be stolen. However, Student #1 reported that he and DUHAIME encountered the cases in the mail area outside the Useability Lab. Second, although DUHAIME claimed to have previously moved the cases from the mail area to the Useability Lab, he told Student #1 that he was surprised by how light the cases were when he picked them up. This indicated to Student #1 that DUHAIME had not lifted the cases before that time and, therefore, was unfamiliar with their weight. Third, DUHAIME claimed that the light was off when he entered the storage closet and opened the Subject Case. Student #1, however, recalled that the light was on when DUHAIME entered the closet. Student #1 specifically recalled seeing light emanating from under the closet door while DUHAIME was inside. Fourth, DUHAIME claimed that the Subject Case was propelled into the air after he opened it and that it landed on the ground. Student #1, however, did not hear any sound consistent with a hard plastic case striking the ground even though he was sitting just twenty feet from the closet. Fifth, DUHAIME said he removed the Letter from the case after he left the closet, whereas Student #1 recalled DUHAIME exiting the closet with the Letter in his hand. Student #1 specifically recalled DUHAIME commenting about the content of the letter without ever having looked at it in Student #1's presence, indicating to Student #1 that DUHAIME must have previously reviewed all or part of the Letter.

The affidavit continues that the day after the alleged explosion, agents took a look at the contents of four computers they found in the media lab, including a white
Alienware laptop, owned by Northeastern:

During the examination on September 28, 2022, the forensic examiner discovered a word-for-word, electronic copy of the Letter stored in a backup folder. The Letter was stored as a ".asd" file, which I know to be a backup file associated with Microsoft Word. I am aware that certain word processing applications like Microsoft Word will automatically save files at set intervals (e.g., every ten minutes) regardless of whether the user manually saves the document. These files are kept in a temporary folder for a set period, after which they are automatically deleted. The metadata associated with this file reflects a "Created Date/Time" of September 13, 2022, at 2:57 p.m. EST and a "Last Printed Date/Time" of September 13, 2022, at 4:02 p.m. EST.

The affidavit concludes with the FBI agent explaining why Duhaime's story was a complete fabrication, including:

Although DUHAIME was wearing a long-sleeve shirt when he opened the Subject Case, the shirt sustained no apparent damage. Had “sharp” objects been expelled from the Subject Case like DUHAIME claimed, I believe his shirt would have sustained at least some damage. DUHAIME’s claim that the sharp objects "flew up" his sleeves is, I believe, implausible on its face.

Jason supports students and faculty on how to use specialized technology, both in the computer labs as well as in the classroom. He manages and supports the Virtual / Augmented Reality and 360 immersive technology for the College. He is responsible for integrating large scale projects that implement new technologies for CAMD. Manages and supports the operation and training of new technology in labs. Working with and training students and faculty on their Virtual / Augmented Reality and 360 immersive projects, through classroom workshops and or one on one training sessions. Provides technical Instructional Design and Training and Support for all of CAMD. 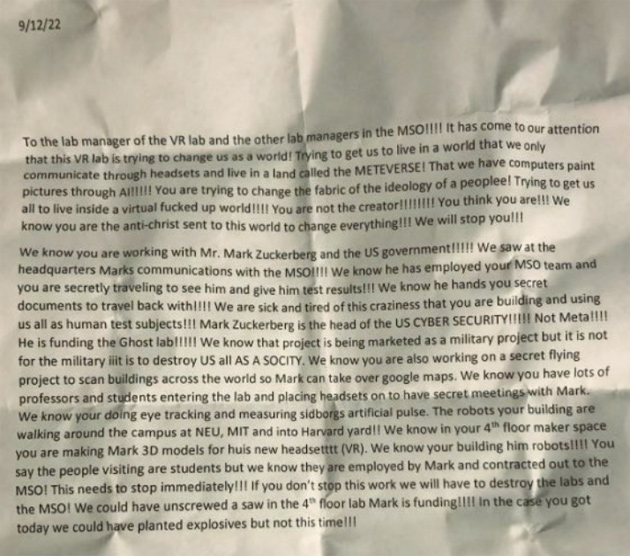 This guy really needs to get out of IT and into something a lot less stressful. I hope a nice relaxing stay at a mental hospital will help him with that career change.

Grumpy IT Pro here.. I can concur about the stress. Actually got finger wagged by my Dr about rising blood pressure. Amazing how it went down after I switched jobs (to a different role and company).

But yeah IT people are pretty stressful and grouchy. But this is.. a bit much. Even for the most disgruntled employee.

Also, IT person and didn't think about shredding the drive of the computer he used? Sheesh.

And forgetting about Word's backup files

which also is not the only way the owner of an "anonymous" Word document can be identified, btw.

But for once I do think an "innocent, etc." on UH will have a successful insanity plea. Not one that lets him out without treatment, of course.

Mr. Big IT man probably forgot about the MIC in the printed document as well. FBI agent interviewing him at the hospital already had enough evidence of a hoax that he repeatedly told him that it was a crime to report a false bomb hoax and gave him the opportunity to recant.

Of all people, this guy should have known how to cover his tracks.

Did he think the FBI wouldn't have people who knew where to find them?

Remember your post when the hoax story first came out?

Typical lack of comprehension that comes from orange encephalitis.

At least you linked to the entire comment where I noted that we didn't have enough information to know what happened.

That's a lot of exclamation

Five exclamation marks, the sure sign of a deranged mind.

With Julia and the mighty fine, Denzel, wasn't nearly as intriguing as this story.

Oof, what a hapless amateur! Your average

tween geek could pull of a stunt like this with better opsec. Pitiful, and it'll cost him several felony charges.

the cheapest alienware laptops are like $1,500. no wonder northeasterns tuition is so damn high.

If they're actually using these for new media, VR, etc, having a portable device with a strong graphics card is a pretty good idea. There's probably a bunch of faculty and administration at Northeastern with laptops just as expensive that only get used for opening their email and Microsoft Office.

I'm left with this

Why? What was his motivation? Was he going to sue someone for his "injuries"? Was he going to go out on disability or something? And who fakes an "explosion" when any child could see the result bears no evidence of anything having gone "Boom"?

I wonder if he'll even have an answer for that after he is stabilized.

Are we in Idaville?

The clue about the sleeves could be right out of an Encyclopedia Brown mystery.

If the metaverse really gets horrifying...

...can't you just take off the fuckin' goggles? I realize we're talking about someone who may have some mental health issues, but still...

Duhaime could've just checked Meta's stock price over the last couple of years to see how well that metaverse-y stuff is working out.

Wants to take down the metaverse, taken down by the metadata.

The thought that he faked it never occurred to anybody. Said no one.

Boston is a tough housing market

DUHAIME formally resides in Texas with his girlfriend, travels to Texas “every
two or three weeks,” and sleeps in the Lab or in his office whenever he is in
Massachusetts. He does not maintain a residence in Massachusetts even though
he works full time at Northeastern.

I think they may be right.

… the “girlfriend” is also a hoax.

Texas gun dealer charged with threatening to kill Fenway doctor as part of Children's Hospital transphobic hysteria
Students try to get BU to change name of dorm that honors Myles Standish, who invited several native leaders to a peace council, then killed them
Northeastern plans to use its library for books again
BU dad in a Maserati brings B Line to a crashing halt
State commits to replacing decaying Bowker Overpass; new configuration will mean reconnecting the Emerald Necklace with walks, more parkland
Starbucks workers walk out across Boston