One of the Russian yachts the West might seek to seize may already be in Russia, but its owner sits in a Plymouth County jail 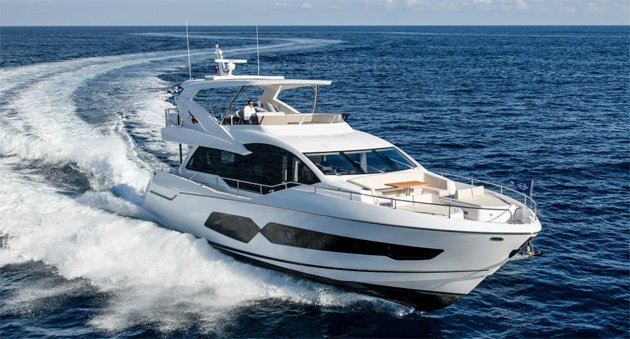 Sunseeker 76, of the type a detained Russian exec bought in 2020.

At just 77 feet long, Moscow resident Vladimir Klyushin's Seven K yacht is just slightly below the lower limit of a "superyacht," which starts around 82 feet, but it would still cut quite the figure in all but the most jaded of ports.

But unlike fellow Russian Abramovich's 456-foot superduperyacht, currently berthed in Barcelona, Klyushin's yacht, a Sunseeker 76 that he bought for nearly $4 million in 2020, might already be in Russian territorial waters - its last reported position was in Sochi, on the Russian Black Sea coast.

Although he is Russian, like many Russians with money to spend, he turned to England for maintaining an expensive asset - the boat is registered in the United Kingdom, not the Russian Federation.

Invoice for the yacht, from federal court filings:

The ship has four cabins - with a fifth space that can be used as a cabin for a crew of three. It can get up to 32 knots.

Still, Klyushin hasn't had any chance to take her out for a spin since last March, when Swiss police detained him - as he was walking from a private jet he'd taken from Moscow to a private helicopter that would ferry him and his family to a ski resort - at the request of the FBI.

After losing his, and the Russian government's, appeals, he was flown to Boston in December, to be formally charged with a variety of financial crimes based on his consulting firm's alleged ability to hack into servers holding American corporate data before it was publicly released, allowing the company to make successful stock trades in the companies. Some of his underlings, who did not leave for Swiss ski trips, had earlier been indicted in US courts for their alleged roles in trying to hack the 2016 elections.

After his arrival at Logan, Klyushin was ferried to the Plymouth County House of Corrections, which has a contract to hold people awaiting trial on federal charges.

Klyushin had asked that he be released to 24-hour detention in an apartment near the federal courthouse in the Seaport, but US District Court Magistrate Judge Marianne Bowler agreed with prosecutors that Klyushin should remain locked up in the Plymouth county jail because a man with ready access to private jets and helicopters and his own yacht, who had been given an award by Vladimir Putin himself and who knew the ins and outs of international finance and travel was just too much of a flight risk - especially from an apartment just a short walk from Seaport docks.

Klyushin's lawyer had argued the Seaport apartment would make it easier for Klyushin to work on his own defense, in a case that will involve pouring over voluminous amounts of documents, many in Russian, that he would put up a London flat as security, that he would hire a private security firm to keep watch over him and that he was planning on selling the yacht anyway.

Bowler discounted all that, along with a letter from the Russian embassy in Washington that it would do nothing to help Klyushin escape the country.

The Plymouth County Correctional Facility has 4.6 out of 5 stars.

is what exactly they will be pouring over those documents.

Maple syrup. They know they

Maple syrup. They know they shouldn't eat the evidence, but it's just so good.

Was moored in Majorca, and crewed by Ukrainians. He is the head of a weapons manufacturing company. One of the crew recognized a missile made by the company on a news report from Ukraine, and opened a couple of sea valves on the boat "partially sinking" it. The sailor was arrested, a judge released him, but he was rearrested and may be prosecuted.

[Link is to the original Spanish report. Here's one in English.]

Update: Here's a better report, from The Guardian.

It's true. Just a hole to

It's true. Just a hole to throw your money into.

That boat is the epitome

I'd say Bezos's rocket beats it for the epitome