Orpheum Theatre could get a 12-story hotel as a neighbor 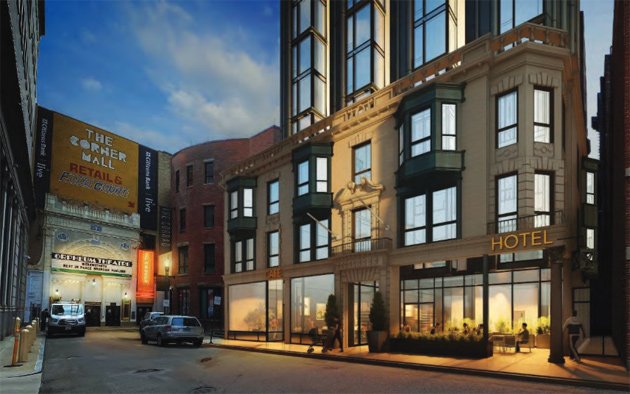 City Realty filed plans today to open a new downtown hotel by adding nine stories to what is now a run-down 19th-century office building next to the entrance to the Orpheum Theatre.

The proposed 80-room hotel would sit on Hamilton Place, the dead end that runs from Tremont Street to the theatre's main entrance and a side entrance to the Corner Mall food court. The new floors would be added atop what is now a three-story building.

The site is currently comprised of a dilapidated 3 story structure dating from the mid 1870's in need of extensive rehabilitation. The proposed project will restore the existing building facade to its former architectural expression with rich period detailing and materials typical in character to those found throughout the Ladder Blocks District. This facade restoration will serve as the base for a new 12-story boutique hotel, grounding the new building within its urban historical context. ...

Due to its use as a hotel, the building will be active 24/7. This operational opportunity allows the ground floor of the building, which is split between the hotel entry court, lobby and a small cafe, to be highly connected to the public realm. An open entry court at the corner of the building effectively widens the narrow sidewalks along Hamilton Place and provides a moment of relief in a busy and congested area. Additionally, a ground level cafe will further activate the streetscape. Large glass storefront windows restored to their period architectural expression will create visual transparence between the public realm and commercial uses and help foster an activated and safe urban way.

The project draws design inspiration from the rich architectural fabric of the Ladder Blocks District. Sculpted stone pilasters, ornate precast detailing and crafted metal bay windows are just a few of the features that create a unique and richly articulated architectural language throughout the area.

This project restores many of these facade features on the historical base elevation and implements a contemporary interpretation of these design moves on the new hotel floors above.

Given the tight site and tall buildings directly adjacent, opening up view corridors and providing daylight for the occupants of the building is a main design driver of the project. A contemporary interpretation of bay windows seen throughout the area not only provides a timeless contextually appropriate design element, but also sculpts the building in such a way as to provide optimal views and daylight to the highest number of rooms possible.

Because of its proximity to subway and bus lines, City Realty has proposed no parking spaces - but eight bicycle spaces.

There must be a lot of

There must be a lot of business meetings in conference rooms in all of our office buildings and life science sites and no shortage of bars and restaurants and nightclubs and theatres and comedy clubs bustling and unaffected by Covid, City Hall, and the State House to attract a Downtown hotel guest.

History Lesson: "God Save The Kinks"

In the 70s, somebody spray painted "God save the Kinks" on the wall where the hotel would be. I think it was somebody waiting in line to buy tickets to a Kinks show at the Orpheum (for a time in the early 70s known as the "Aquarius Theater"). You used to have to wait in line. Believe it or not, credit card orders were not a thing yet. Anyway, "God save the Kinks" stayed there for years. It became a tourist attraction of sorts.

Nothing good comes from City Realty.

Nothing good comes from City Realty.

Good luck keeping scalpers and drunks out of the lobby on show nights.

open a new downtown hotel by

The building looks fine to me

The building looks fine to me. https://goo.gl/maps/NgiBEdcAgXrrS4ez7

From the outside, it looks like a quirky unrenovated small office building. Maybe not worth an official preservation effort, but I'll still be sad to see it turned the facade of a fancy hotel.

Judge rejects request by Boston cops to dismiss First Amendment action over the way they pepper sprayed and hit George Floyd protesters in 2020
MBTA restores service on the Green and Orange Lines downtown
Police hunt four who stomped a man outside South Station last night
Rally on the Common at 5 p.m. and in Copley Square at 6
Sumner Tunnel to remain open this weekend because of all the Government Center Garage mishegas
Five-alarm fire in new office tower next to Government Center Garage downtown