Police continue hunt for Cambridge grope-and-go attacker, who runs away balancing on his toes 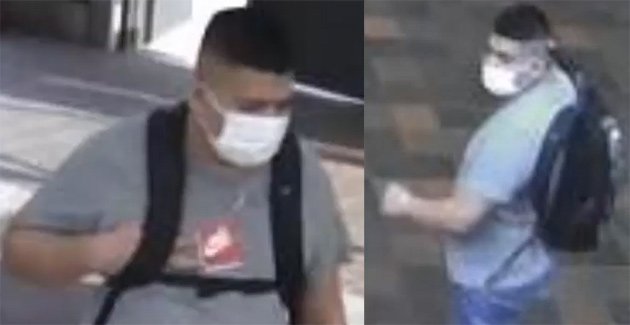 Cambridge Police report they are looking for a man they say has groped women in Harvard and Porter squares this year, after which he darted away, "running on his toes."

Aug. 24, 3:20 p.m., Prescott Street and Broadway: Man came up behind woman and grabbed her chest from behind. When she turned around, he laughed and ran away towards Prescott and Cambridge Street.

April 13, 8:40 a.m., Porter Exchange: Woman walking down Roseland Street towards Mass. Ave. felt somebody coming up behind her and then he reached up her skirt and groped her buttocks, then ran away.

Feb. 10, 9:08 a.m., Mason Street and Phillips Place: Approached woman from behind, grabbed her buttocks and groin area, then ran to Brattle Square.

He's described as a possibly Hispanic man, 5'3" to 5'8" and carrying a dark backpack Police described his toe-running flight as "a unique and noticeable gait."

Don't know him...but somebody must

I have to say that posting this is a great service. As much as I like the Globe, they have gotten into the habit of writing stories that say, "The MBTA (or whoever) has released a photo of the suspect." And then they don't include the photo. WTF?

Runs like a dainty cartoon you have no idea what they may be capable of. Running form is important.

If he's a local

Somebody knows this guy from school. Running on tiptoes is not something you just start doing after you commit a crime. This is probably something he's been doing all his life. People especially kids notice things like that and don't forget.

Police responded to a burning bush in Cambridge, but the bush did not speak to them and there was a guy standing next to it with a lighter
Protests, few answers at meeting on police shooting of Bangladeshi immigrant in Cambridge
Mythical Central Square club set to re-open next week
Tech exec at area drug company and boyfriend charged with swindling company out of more than $2 million
Two shot in Cambridge
Protest over police killing of man in Cambridge