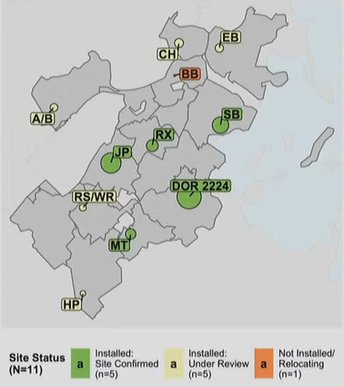 Map of installed and planned Covid-19 test sites, from BPHC

Boston has hired the company that has been sampling sewage at Deer Island for the presence of Covid-19 viral particles to perform similar tests at 11 sites across Boston, Boston Public Health Commission Executive Director Bisola Ojikutu told a City Council committee today.

Samples from the local sewer sites will give the city the ability to better target particular areas for intervention should their numbers spike, Ojiktu said, adding that most of the sites are now operational and that she hopes to begin publishing the data publicly.

The samples will be tested by Biobot Analytics, an MIT-spawned company in Cambridge that has been doing similar sampling at the MWRA's Deer Island treatment plant since early in the pandemic. The numbers have proven to be a predictor of Covid-19 cases a week to ten days out, based on the fact that people begin excreting the virus before they even think to get tested themselves for infection, if they do so at all.

The latest numbers from Deer Island show a spike in recent days, as shown in this chart from the MWRA's northern sewer system (roughly north of Rte. 9): 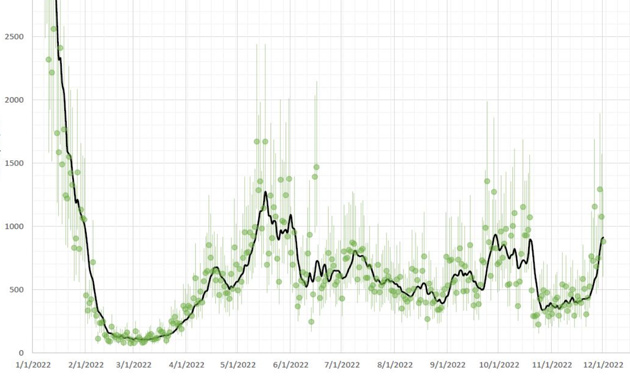 Ojikutu said the spike emphasizes the importance for residents to get Covid-19 booster shots. She said only 11% of Bostonians have yet to get the bivalent shots, which provide stronger protection against the omicron variants.

She said the city currently runs walk-in vaccination and testing clinics and that a sixth will open soon, possibly next week, at City Hall. A number of private groups and pharmacies also provide vaccinations. Complete list.

What practical implications or interventions aside from publishing more COVID data does the BPHC envision?

I'm guessing that local data will be more convincing

It's not unlike the West Nile data. If you tell me that you trapped virus-positive mosquitos near my house, I'm going to pay more attention than if all of Boston is in a "moderate risk" zone.

If there's a spike in, say, Hyde Park, they could open a temporary vaccination center at the Muni. And if that spike continues, they could spend some time trying to convince more people there to get vaccinated.

Something for you to read

I’m glad to see the

I’m glad to see the governments mind fu*king of the febrile minded is ongoing.

I guess the government *is* targeting people with fevers here

but I think the point is to help them not be "fu*ked". You know, with life-saving vaccines and such.

Biobot's not just for Covid

I saw a talk by one of the co-founders yesterday. The company grew out of the work she did for her Ph.D. dissertation 9 years ago, well before Covid. The original plan was to test for flu, but it turns out the flu virus is one of the most difficult pathogens to test for because it breaks down quickly outside the body. They are currently able to test for a variety of pathogens and can add new ones as needed. It was fascinating to learn what was involved in figuring out how to operationalize the original concept and how inter-disciplinary the research team had to be.

No local testing for Allston/Brighton?

Are we just supposed to count the number of dead rats on the streets or what?

Right there on the map

A/B is right there on the map, in the "installed, under review" group.