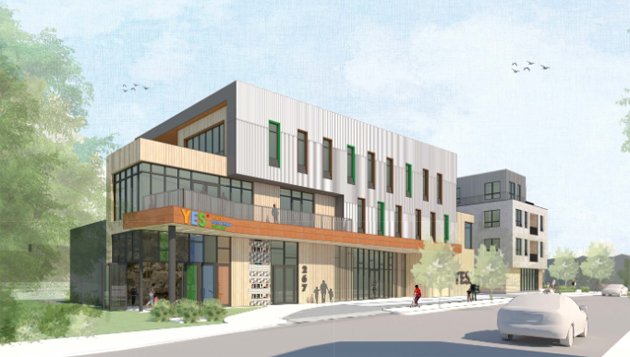 Rendering of the proposed buildings by Embarc Studio.

Five Amory Street residents sued yesterday to try to overturn the city's approval of a proposed new headquarters for Youth Enrichment Services and a nine-unit apartment building next door, saying the two buildings are simply too large for the street and that the Zoning Board of Appeal went illegally overboard in granting the variances the project needs.

In their suit, filed in Suffolk Superior Court, the residents are asking a judge to annul the board's approval of developer Lee Goodman's proposal, which needed variances from the board because his proposal is denser and taller than normally allowed, and did not have enough parking under the lot's current zoning.

The residents charge that the buildings, a four-story, 45-foot-tall apartment building and a three-story YES building with offices, classrooms and a ski shop, as well as a bus turnout, would "completely change the look, view and feel of the area" and block some residents' views of the Southwest Corridor Park. And then there are all the buses "coming back and forth on their otherwise quiet street," the residents say, adding that the "expansive" nine parking spaces for the apartment building would only worsen traffic on the street.

The proposed buildings would sit diagonally across from the large Brewery complex, which has its main entrance on Amory Street.

The residents say they are all in favor of YES getting new space for offices and classrooms for its outdoor athletic programs for Boston kids, which include skiing - but say they could do so in a smaller building.

But it's the apartment building, at a proposed 45 feet that really upsets the residents. There's nothing about the site in question that has the sort of hardships that would prevent Goodman from using the space, if not quite as expansively as he would like, they say.

"All other structures in the neighborhood are at most thirty (30) feet high," the suit says. In fact, the former Haffenreffer smokestack at the Brewery is more than 120 feet tall, although it is not right on the street.

In any event, the residents charge that the new JP/Rox zoning plan only allows for greater density for projects that have a higher percentage of affordable housing than otherwise required. Although YES is a non-profit group, and Goodman pointed to the building as a community contribution, it is not housing and so the greater density should not have been allowed, the residents say.

The residents also say Goodman, a longtime Jamaica Plain developer, never had required meetings with direct neighbors of the project and allege he may have unfairly influenced the Jamaica Plain Neighborhood Council to support the proposal.

yes in my backyard

Sounds like a great project. Boston desperately needs more housing. the project clearly fits with the spirit of affordable housing requirements by including space for a neighborhood non-profit. Also, we should build tall next to T stations

A four story building isn’t even tall! These bratty nimbys just like complaining because their lives are empty.

3 non profits in a year

What was the point of going through the drawn-out JP/Rox community-input process, which reviewed the impact of development in this area and created buy-in from the neighborhood by addressing local concerns, if the zoning can be significantly amended upon request? Figure out what the zoning should be, and then build within those parameters--isn't that the purpose of "urban planning"?

I work in the area. Amory is not a quiet street. And unless you live on the third floor of a building there is no real view of the Southwest Corridor Park from that section of Amory Street. It's either the JM Brown building or their parking lot.

so screw the neighbors

and let the greedy pig developer hide behind the "nonprofit" to have his way.

The "greedy pig developer" in

The "greedy pig developer" in this case is Watermark Development, owned and operated by Lee Goodman, whose entire family (several generations thereof) has lived in JP for decades. They also built the new Horizons for Homeless Children headquarters over on Columbus.

JP has officially become the land of entitled, self centered trash who excuse themselves for treating people like crap by labeling themselves as so called progressives. In the past year, 3 non profits have been sued by the so called progressive neighbors:
1. Pine street inn
2. Jpndc affordable housing
3. Youth enrichment services

While I agree the people behind this lawsuit are selfish and entitled, there's absolutely nothing special about JP here. EVERYWHERE zoning regs make it easy for NIMBYs to slow or stop new housing, NIMBYs will do it.

We need to change the regs to make it much harder for NIMBYS to NIMBY.

why would you even care about a view of the SWC?

I love the park and think it’s great! But visually it’s a 10 yard wide strip of grass next to a sunken rail road track.

I guess it technically blocks

I guess it technically blocks the view of the train tracks and some of the park on the other side that you can see through the fencing...

That section of tracks is covered. It is a grassy field. But the point that the existing buildings across Amory already block views is correct. This is stupid and I hope the court awards damages for legal fees to the defendants for having to deal with this NIMBYism.

That address is south of the fields, close to New Minton St. The trench is open there.

Can confirm (source: Walked by there again after reading the above comment)

Guaranteed these people aren't actually from JP. Most likely "newbies" who bought in JP and now they want to lose the flavor of the area (though IMO it was lost a long time ago and not in a good way).

You live in a city - want quiet? Move to a quieter part of the state.

According to their lawsuit

They have all lived on Amory between 14 and 28 years (if you want to see their complaint, it's linked at the bottom of the story).

for what its worth

Frankly, i dont understand why living there for a long or short period of time justifies suing a youth center bc it blocks your view a train track and grass sliver.

What is really hypocritical

What is really hypocritical is one of the plaintiffs’ homes received zoning variances in late 2018. This is all public record and can be found online. So zoning has to respected and there should not be exceptions, well unless those variances were for the plaintiffs.

My first reaction was an

My first reaction was an eyeroll at the NIMBYism, but if they manage to get more affordable housing included in the development as part of their claim, good for them.

Spoiler alert: They will not

Spoiler alert: They will not get that without also allowing the developer to violate the JP/ROX-imposed height and setback requirements too.

Why "spoiler?" I didn't say

Why "spoiler?" I didn't say they shouldn't.

Their lawsuit says nothing

Their lawsuit says nothing about affordable housing.

The project contains no affordable residential units. Nine market rate condos to subsidize the YES building. YES has looked all over and can’t find a building to meet their goals.

Did you even read the complaint?

You do know it's attached. Line 38 discusses the JP/ROX plan and affordable housing.

I would love to see a breakdown of the recipients of these affordable units, and what their incomes are. I mean, 80% AMI for one person is $67,700...which is pretty frigging high. That person could in theory qualify for a studio at $1,335...which is darn cheap these days. Do new developments pack a section of their buildings with studios and say "5 out of the 40 units are affordable!" then accept a bunch of recent BU and Harvard grads to fill them?

Those are HOUSEHOLD incomes,

Those are HOUSEHOLD incomes, and the numbers are cutoffs, not minimums. The rent is generally set at 30% of income for a household making 20 percentage points below the cutoff, so would be 60% AMI in this case, or $72k for a family of four. For reference this is less than most teachers in Boston, but also because it's a household income based on the number of people, two people living together with no kids making $39k each would be "too rich" to qualify.

They are HOUSEHOLD incomes! Still, do they pack them with upper middle class singles or no? That's the question.

I'm confused. Are you

I'm confused. Are you suggesting that people who would qualify for an 80% AMI unit are upper middle class singles?

Saying that one person making 68k is not

who I think of as ideally being the target audience for affordable units. That's all. Just curious who generally gets assigned these apts. when all is said and done. I would drop the AMI cap for single people. It seems more in-line with the income limits as family size increases.

1. The inclusionary zoning program was not designed as a program to house the poor. The original idea was to help out people who were too rich to qualify for the section 8 program, but not rich enough to afford market rate housing.
2. The demand for these units tends to come from families, so must developers these days don't tend to build a lot of subsidized studio or one bedroom units. The BPDA also tends to encourage developers to make more of the subsidized units multi-bedroom for exactly this reason. I suppose in theory a single individual making $68k could apply, but they'd be paying for more housing than they needed. Building management also has discretion not to rent it to them.

They do drive like their cars are in covers.

That this project needed variances, should raise red flags for reasonable minded people. The claim that they did not meet with the neighbors, is hopefully incorrect, or else they should be made to start all over.

Some projects are just bad ideas, regardless of the intentions. That is why there is a process and code requirements

I hope this gets approved

YES is a fantastic organization that I volunteered with pre having my own kids. Once my kids are big, I hope to volunteer with them again. Teaching inner city kids to ski was really a lot of fun.

Glad to see that they are getting a home that is better suited to their needs.

These NIMBYs need to complain about something else