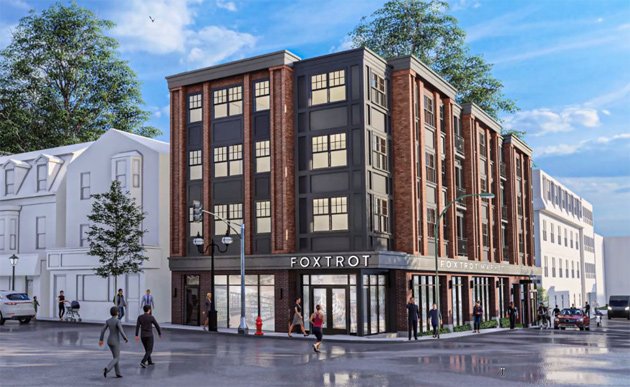 The Zoning Board of Appeal today approved plans by Joey Arcari to replace what is now a vacant lot at 748-750 East Boradway at L Street with a four-story building: Ground-floor retail space topped by three residential floors with a total of nine apartments.

The board approved the proposal after Arcari's lawyer, George Morancy, said Arcari, who owns the Broadway and the Playright, agreed to fill the ground-floor space with something other than a bar or restaurant, like a store of some kind.

Arcari also agreed to rent one of the apartments, a two-bedroom unit, as affordable, to a tenant making no more than 110% of the Boston-area median income, which would mean a maximum monthly rent of $2,679, Morancy said. The city's affordable-housing requirement only kicks in with projects of ten or more units.

You can call anything

You can call anything affordable now

The keyword is “now”.

Up until a couple of months ago the lit had a driveway, coffee shop, corner store and an apartment building which he tore down to create an “empty” lot. So please don’t make it sound like it was a weed filled piece of decrepit property.

A fenced off, decaying building, though?

to just build bigger and “better”, but if you travel back through time via google maps you can see that 2 of the buildings he demolished were little more than shacks connected by another shack. I think the proposal is a much more appropriate use of a city lot than the buildings that were removed. That doesn’t mean that I don’t think he has something up his sleeve regarding a future barroom in the space.

A "coffee shop" that hadn't

A "coffee shop" that hadn't been open in what, 4 years? 5? It was nothing. It is still nothing. It will become something.

When will they learn that

When will they learn that these provisional approvals are garbage without enforcement.

Fox Trot. My grandmother danced it.

After a shot of whiskey

What's the reason for the "no bar/restaurant"?

I'll admit I'm not super familiar with this specific corner but it seems like a good spot for one and there was obviously a coffee shop there before.

I don't _know_ the reasoning,

I don't _know_ the reasoning, but if I'm guessing its because the other two neighborhood joints that are owned and operated by this group (The Broadway and the Playwright, or whatever it's going to come back as) are sort of a pain in the ass. The brunch/football lines create a traffic disruption and the last-call folks don't know how to shut the fuck up in a residential area at 2am.