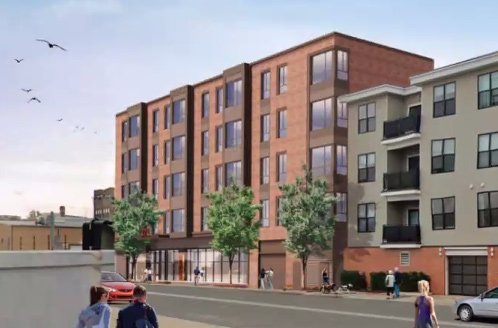 Rendering by PCA. With birds!

Of the 81 apartments, 12 will be rented as affordable, including one three-bedroom unit.

The building will have an underground garage with 60 parking spaces.

Through an aide, City Councilor Ed Flynn called on Balboni to work with the BPDA to try to add in the nine extra spaces he had originally proposed but which the BPDA, in its own approval, told him to delete.

Flynn aide Ana Calderon said Flynn feels Boston has a parking crisis and that while he would prefer new developments have a one-to-one ratio of spaces to units, he recognized work Balboni had done to meet other neighborhood concerns, including reducing the overall number of units from 91, shaving off one floor and agreeing not to build a roof deck.

Balboni attorney Joe Hanley said the building is a short walk from the Broadway T stop.

Not that short of a walk in late January when it’s so cold it feels like your nose will fall off but hopefully they have bike racks.

And they'll be putting in a Bluebikes station.

To say that Balboni inked the deal...

at least it's great to see

an example of such unique and imaginative architecture. They must have made a deal with a pallet recycling operation, so it's a green building.

I wonder how much strain on the neighborhood power grid this will impose? Just keep building. What could go wrong?

It's a shame that the power grid could never be upgraded to support different usage requirements in the neighborhood. Oh wait.

I'm sure the current seafood

I'm sure the current seafood processing plant is using a substantial amount of juice keeping it's refrigeration units running 24/7, year round.

Power outages are nothing new

Power outages are nothing new in Southie. We’d have them during the summer in the 80’s and go outside and play flashlight tag.

I'll admit, this is a new one

Are people getting tired of playing the "not enough parking" and "doesn't match the character of the neighborhood" cards?

Adam, the main building in the center of this photo is already built; the new building is the one cut off on the left of the photo.

Seems odd their own rendering focused on the existing building, but new rendering in place.

At least it has the mandatory birds

How out of touch is Flynn

How out of touch is Flynn that he thinks Boston needs less housing and more parking, that we have a parking crisis and not a housing crisis?

We should have some parking for those who own

Actually Ray Flynn was great in the 80's. People can say whatever they want about him but he was the people's Mayor. Look up Gentrification Boston Globe October 1985. For us Bostonian's who were born and raised here when we the people of the city voted against building condo's Ray Flynn stated, "I am here for the people of Boston, if they say they don't want condos then we won't build condos. I am here for the good of the people." Guess what we the people won! To the people that weren't born here and still moving in can say whatever they want about the old Boston...yes their was crime, yes the building looked depleted but the dirty old Boston was awesome but affordable. That's when the politicians cared about the real people of Boston. There should be some form of parking though for those who own. Yes I get we need to build more housing but why not just build apartments with underground parking or at least dedicate a lot to have parking. I am with old Ray on this one. Condos and townhouses don't last long and take longer to depreciate. People are tired of the high rents and HOA fees. Even the newcomers are fed up with the high cost housing that even they are now pricing themselves out.

Going out in a limb here

Why not mixed use? Squid

Why not mixed use? Squid processing on the first floor, slugxury apartments above.

Adding one three-bedroom affordable unit is clearly the way out of our family housing crisis.

And how on Earth does reducing the unit count from 91 to 81 change anything, other than making less housing available in the city? The neighbors are fine with 170 new people living on the block, but 190 would just cross the line? Who would even notice the difference?

These aren't real, specific concerns from the neighborhood; it's just people wanting to feel like they got something in negotiations, even something worthless.

Sexual attacker sought in South Boston
Moakley Bridge light pole falls on pedestrian's head, sending her to the hospital in bad shape
Excel High student, mom arrested trying to battle their way into school to attack another student, DA says
Man charged for role in homophobic stomping at Andrew station
People stumbling out of the Andrew T stop late at night with a hunger for pizza will have to go home and order from there, board says
Judge says owner of ill-fated boat can continue to make his case that he wasn't to blame for Boston Harbor crash that led to one passenger's death