Today's fun fact: Snakes that live in Needham's Cutler Park can rattle, but they're not rattlesnakes 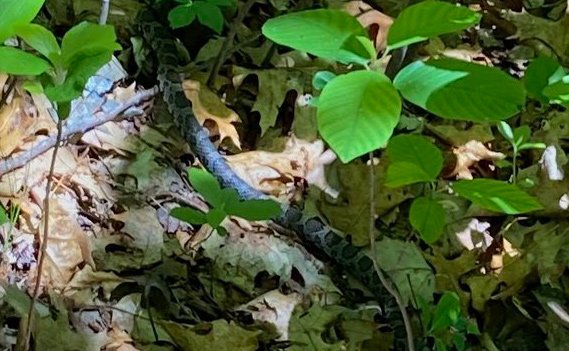 A little hard to see, but there's a snake near the center of the photo, which Greg Hunt took today at Powell Island, a part of the marshy area along the Charles in Needham, near the Newton line, just across from Millennium Park in West Roxbury. And he reports it didn't like having its photo taken:

Definitely a rattlesnake as it rattled at us twice before moving along. Didn’t think any were left around Boston outside of the Blue Hills?

Roslindale's resident snake (and turtle) expert, Andrea Howlett, took a look at the photo, though, and said that's no timber rattlesnake, which, yes, inhabits the Blue Hills, but is an eastern milk snake, which also has the ability to rattle, just not to inject poison should it bite.

That is an eastern milk snake. Massachusetts has two non-venomous snakes that will "rattle" their tails if they feel threatened: eastern milk snakes and black racers, both of which can be found in Cutler Park.

It’s thought that this behavior is to distract a potential predator away from their heads, so they can make a quick getaway, although there have been theories that it mimics a rattlesnake.

So your tootsies and chihuahuas are safe along one of the wilder stretches of the Charles, at least until another bobcat returns.

And there goes VA Shiva...

Off leash toy dogs aren't safe I suspect given the presence of coyotes in Cutler Park.

Chihuahuas were originally raised by the Aztecs for food. Perhaps they should be called snack dogs. Here, my little Chilaquile!

And you still don’t want to

And you still don’t want to get bitten by a non-venomous snake.

I’m not sure how much of a bite risk these species are. But if it does happen, it requires a trip to urgent care to get a tetanus shot.

I didn't realize that tetanus was a risk for bite wounds, but I guess that makes sense -- it's a puncture, which creates an anoxic environment.

(Probably only worth an urgent care visit if you're out of date on your tetanus booster, though, right?)

Milk snake: "Don't tread on me. Please?"
No true battle rattle, but an itty-bitty bite.

I'm happy to know there are still milk snakes around. I was delighted to see a water snake last year when out fishing. I hope to see more than just garter snakes.

In other Needham news

Droughty: You can now wade across the Charles River and not even get your knees wet, at least along one stretch
Three-alarm fire in Needham; Boston firefighters respond
Gannett pulls plug on more newspapers
Dawn wasn't the only thing breaking on 128 in Needham this morning
Tread carefully this icy Christmas
Not something you want to see while zooming down 128: Two tractor-trailer tires flying at you from the other side of the highway