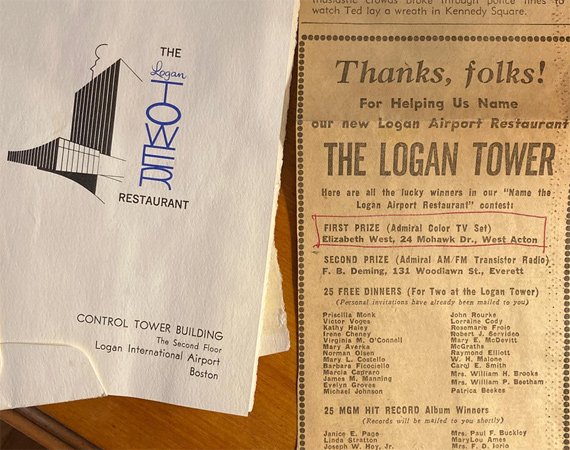 Going through her mother's stuff, Jessamyn West found the following clippings from the early to mid 1960s, when her mother won a contest to name the swanky new restaurant going into the Logan Airport control tower.

This wasn't the tower with the two giant candlepins we know today - that went up between 1971 and 1973 - but an earlier, shorter building built in 1957 to replace an even older and still shorter wooden tower that had to be evacuated in hurricanes.

The Logan Tower Restaurant first opened on Dec. 16, 1966, with a gala for the Seminary Guild of New England. On the Globe Women's Page, Globe Society Editor Marjorie Sherman reported:

The glittering planes coming and going, beside you waiters hovering with Escoffier dishes - and it was all in the preview opening last night of the Logan Tower restaurant at the airport. A triumph.

Up from Washington and the Symphony Ball, which Sen. Ted Kennedy and his Joan co-chairmanned, Peter Duchin, like his father before him, drew people like a magnet. The piano was surrounded constantly as they watched his hands and talked about Eddie and if he played all night it wouldn't be enough.

Lingering together over their beef and lobster under the expert ministrations of maitre d'hotel Pieter van De Rybt and manager Berne Hoaglan were monsignors and judges, company presidents, heads of banks and businesses and scores of pretty wives in dresses as long and lovely as any Paris opening.

The new, current control tower was built with a cocktail lounge on the 17th floor - and an observation deck on the 16th. Both were shut in 1989 for security reasons. Patrick Smith recalls the days when he and other local urchins would regularly spend time up on the deck - when not casually walking down jetways into parked airplanes to sit in the cockpits.

Once bored with the flight deck, we’d head back to the cabin, loading up our backpacks with barf bags, magazines, briefing cards, and cans of soda from the galley. We’d guzzle down that soda and were careful to save the cans. After amassing a six-pack or two, it was back to the 16th floor. There, in the bathroom sink, we’d fill the cans with water before sneaking into the fire escape. Within the tower’s north pylon, directly between the elevators, is a top-to-bottom spiral staircase. We’d learned to jimmy the door without triggering the alarm. Once inside, we’d lean over the railing and drop our water-filled cans the entire, 200-plus foot height of the shaft.

The cans would wobble, twist, and twirl, depending on the angle at which we released them. Like a pitcher feeling out the seams of a baseball for a slider or a curve, we had the different trajectories down to a science: hold it this way for a flat spin; tilt slightly for an end-over-end rotation. Off they’d go, and you’d hear the cans hissing as they accelerated toward terminal velocity, disappearing into a barely visible speck before impacting the concrete floor.

When air travel was cool

Growing up in East Boston in the 1960s, I had relatives who would frequently go to restaurants and lounges at the airport strictly for social reasons. They even went to mass at the chapel there on Sunday mornings, despite there being churches nearby to their home. It was considered the glamorous thing to do back when air travel was cool.

I never got my free record!

never got to watch that TV!

As I told some friends later, my parents SOLD the big color TV that they won and we didn't get another color TV in my family until the 1980s!

and if i recall correctly...

...mom did something really specific with that money. i know it was always part of the story. do you remember what she said she did with it?

You've got to be kidding me. The world is a small place, tiny in fact.

Dont feel bad, I never used a Microwave oven until I moved out on my own. Dad was too cheap for one.

But smart move by Mom. I know a few Price is Right contestants who sold all the prized they won. The cash was far better than the prize.

those 60’s, when wildly creative ideas, like naming the restaurant in the Logan Airport tower “The Logan Tower Restaurant”, could win you a contest.

our mom actually said later she didn't like the name

but she worked in radio advertising so she was pretty sure it would actually WIN, because she figured they wanted something neutral and benign.

You were serious about being the sibling? Amazing.

i am in fact an actual real-life sister to jessamyn.

We are very much related.

I think Smith got his dates wrong

The observation deck and cocktail lounge must have closed sometime after 1989, since I visited both with someone I hadn't even met in 1989.

IIRC, the 16th floor deck was closed first (converted to Massport offices?); as a "replacement", a portion of the 17th floor cocktail lounge was turned into a smaller observation deck before both were closed permanently. I think the "security" justification was tied to TWA 800 (much like the "show ID at check-in" requirement that preserved the security of...airline profits they'd lost on resold tickets), which would put the full closure in 1996.

Some footage of Logan the way it used to be can be seen in the 1968 movie "The Thomas Crown Affair". Back then it seemed like a pleasant and futuristic place. Steve McQueen is the epitome of cool in that movie, by the way.

criminals dont know how to read.

There was always the phone book

A 3-inch thick data breach with name, address and phone number of everyone who didn't PAY EXTRA to not be in there.

That's today's conception of a phone book. It was assuredly not viewed as such back then. "Call me, I'm in the book" was a commonly heard phrase years ago.

Agreed as a fellow old person

I knew of one person who paid to not be in the phone book, and the popular view of this was that they were super weird for that. They had a PO Box too.

I do recall at some point in the late 1980s/early 1990s after the bell phone companies were broken/merged/sold/immolated/whatever and we got new phone companies, you were suddenly allowed to choose how your name would appear in the phone book rather than required to have it listed the same way it was on your bill. I knew of people who would list it unusually or pick a different name, so people couldn't look them up and so they would know that anyone calling them asking for that name was a sales call. I had a few friends in high school who would tell us things like, "oh, it's under Linda, Jerry, not Smith, Linda and Jerry" or "it's under my cat's name as the last name" when reminding us how to look up their numbers.

My dad being one of those people. He didnt like his name listed there for reasons... many of the reasons why you don't do it today. Spam calls, sales people, etc.

There were only two people in our phone book with our name... the other one being my mom, who did have it listed. It was awkward for mom to get calls for her ex husband.

And then when I got a phone as a teen, mine was listed too.

I paid extra after being

I paid extra after being almost conned over the phone by a pervert when I first moved to NYC. After that I changed my number and gladly paid to have my number UNLISTED. That was before the days of robo calls too.

I think this is still standard for some contests

The point is so you can verify that the prize actually went to a real human being, and wasn't just nabbed by some insider.

i think i read somewhere that

the flite control deck at logan is the largest of any airport in the world ?

What was the security reason in 1989?

Genuinely curious what people were worried would happen if there was an observation deck overlooking the airport. Was there some incident this was in response to?

I wonder this too

The only thing I can think of is the Pam Am flight over Lockerbie Scotland that was a terrorist plot.

Other than that I am drawing a blank.

I believe there were three converging reasons:

Security and other reasons

The security argument as I remember it (and I'm pretty sure it was TW800 rather than PA103 that was the specific excuse...though that may explain why Smith put the closure in 1989 if he misremembered which flight it was) was that it was somewhat-unmonitored public access to an area only a few floors below the actual control tower. Presumably the threats considered were things like setting fires, planting bombs, or using poison gas (like the 1995 Tokyo subway attack).

A possible hidden reason was that it made room for more high-prestige office space for Massport bigwigs.

Even if this space had remained open in 1996, it would certainly have been closed in 2001 (using the same excuse that the Hancock Tower owners used to close their deck) as noted in #3 above.

At least they used her actual name instead of calling her "Mrs. Robert West" or whatever.

Not really surprising there was a place there.

There was a time that airports were viewed like a mall. Stores, shopping, restaurants. In europe this is still a thing, I was amazed to spend six hours in denmark on a layover that the airport is considered a mall. And many people go to the airport, just to shop. The place was just massive.. but also had a major train station downstairs, and other connections. It really is the best place for it.