And the evictions continue, WFXT reports.

Airbnb purges more than half of its Boston listings

Wired reports on the company's efforts to comply with Boston's new short-term rental ordinance, with a massive purge of its Boston listings over the past weekend to ditch places that, among other things, aren't registered with the city or are in buildings where the owner doesn't live.

After losing bid to officially convert one Jamaica Plain house into a B&B, owner withdraws application for second

A scheduled hearing on a B&B operator's proposal to formally turn a three-family home at 23 Wyman St. in Jamaica Plain into a 13-bed "boutique hotel" today was canceled after he withdrew his application. Read more.

The mayor's office announced today that Boston and Airbnb are now best buds and that the company will require all of its Boston hosts to register with the city by Dec. 1 or get dropped from the platform. Read more.

Airbnb, which ginned up a heavy-handed astroturf campaign to try to block city regulation of short-term rentals, is now trying another approach: A lawsuit charging Boston with heavy handedness of its own by attempting to violate both Airbnb's and its affiliates' free speech and privacy rights. Read more.

The owner of a nine-unit apartment building on Charles Street won city approval this week to convert it into a hotel - like it was before he bought it several years ago. Read more.

Council votes to ban investor-owned Airbnb units, but rejects limit on how long homeowners can rent out units

The Boston City Council today approved, 11-2, a proposed law that would bar investors from renting out apartments and condos on Airbnb and similar Web sites but which would let owners who live in two- and three-family houses rent out units 365 days a year. Read more.

NorthEndWaterfront.com reports on a hearing yesterday. The council could vote tomorrow on a proposal by Mayor Walsh that would only allow short-term rentals in owner-occupied units.

Mayor Walsh today announced a new proposal for dealing with short-term rentals that would by default bar investors from buying up units or even entire buildings and offering rentals on Airbnb and similar sites. Read more.

Boston Magazine reports the apartment and condo rental company had workers calling up Boston residents who have used their service in other cities asking them to record messages about how Boston city councilors are un-American or something. Read more.

Airbnb doesn't know how to quit when it's behind

Well, at least it's no longer singling out one particular city councilor of being in the pocket of Big Hotel. But now the "home share" concern is accusing "Boston lawmakers" of being out to hurt low-income Bostonians.

Airbnb is making it clear this week that not only does it oppose efforts by city councilors to regulate the apartments and condos it advertises, it will take the low road to do it. Read more.

Rather than face a potential fight with the City Council over how to keep Airbnb and its kin from eating Boston, Mayor Walsh has pulled his proposed regulations for possible changes. Read more.

CommonWealth reports that City Councilor Michelle Wu (at large) and Lydia Edwards (Charlestown, East Boston, North End) want to amend Mayor Walsh's proposed short-term-rental ordinance to bar investor-owned apartments and condos from the short-term market. Walsh's proposal would let them rent out units for up to 90 days a year - which Wu says is effectively 45 weekends a year.

West End civic group to consider how to battle Airbnb

NorthEndWaterfront.com reports the West End Civic Association next week discusses "what needs to be done to control the proliferation of AirBnBs and illegal rentals in West End apartment buildings."

Mayor Walsh is formally asking the City Council to approve home-share regulations that would limit how often somebody could rent out their apartment or condo and which would require anybody listing their homes or rooms for rentals to pay a fee that would help the city regulate the burgeoning market. Read more.

CommonWealth Magazine reports on the ploy.

You won't like us when we're mad, councilors exclaim over petition asking them to set regulations for Airbnb and its ilk.

The Boston City Council today approved looking into how to regulate rental services like Airbnb from laying waste to neighborhoods and harming local hotels and workers while also protecting poor homeowners who increasingly rely on the services to make ends meet and stay in the city. Read more. 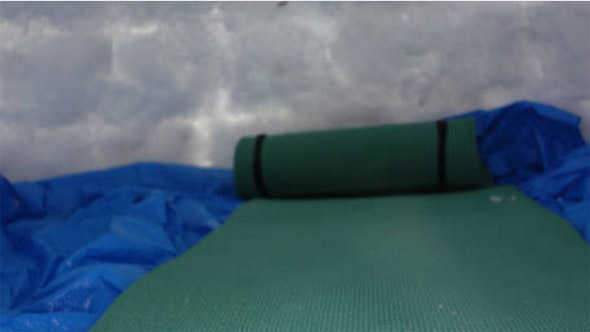 Somebody in Cambridgeport is listing an igloo on Airbnb - and at just $10 a night, it's a steal:

This is an igloo.

Yes. It is very cool. Juno made it.

Comfortably fits 1, or 2 if curled up. You can use the house bathroom and kitchen if you need. Tarp and yoga mattress provided. You'll need to bring your sleeping bag.