The man who plastered Boston with handmade signs - before Doug Bennett

The Ephemera Society of America has an overview of the sign work of Vincent Zarrilli, who made hundreds of black-on-yellow stencilled signs protesting what would become the Big Dig, along with the "Dukakis Artery rats" he said would flood the city during construction, and promoting his alternative for a "Bay Bypass" - basically a double-decker bridge across Boston Harbor, from Dorchester to Charlestown. Read more.

A large section of the right lane on Exit 22 off I-90E is blocked because a large elliptical section broke and fell down onto whatever is below it. Don't know: Big Dig busway? T? Hopefully not highway!

Massachusetts State Police are on it.

Are we as ignorant about the water crisis in Cape Town as one architect there is about the Big Dig?

It seems that, in addition to its ongoing water shortage, Cape Town has a transportation problem that it was planning to solve by constructing a bunch of elevated highways. Now the city has canceled the whole thing, and the architect whose company submitted the winning bid for the work is pretty bitter - bitter enough to write a long, ranty screed about how stupid and shortsighted the city's being and how elevated highways are just so superior to sticking the highways in tunnel. Read more.

Could Big Dig ramps be covered in something like Manhattan's High Line Park?

NorthEndWaterfront.com reports on a MassDOT/BRA meeting to consider how to cover the ramps leading to the tunnel under the Greenway.

Among the most interesting options presented for Parcels 12 and 6 were elevated pedestrian walkways that cover the ramps and provide above ground (~15' high) observation areas. The ramp covers and high decks could be designed to be similar to sections of the popular High Line park in Manhattan.

After seeing a report on Boston Reddit from a motorist who said something fell and almost hit her car, maintenance crews went through the tunnel twice yesterday looking for evidence of something falling from the ceiling, a MassDOT spokesman says:

UPDATE: State officials say they couldn't find any evidence of anything falling from the ceiling.

I was driving southbound through the O'Neill tunnel earlier this afternoon, when a long, rectangular, and apparently heavy object fell from the ceiling into the lane in front of me. It was accompanied by a plume of dust that quickly cleared.

All the highways and parkways that never were 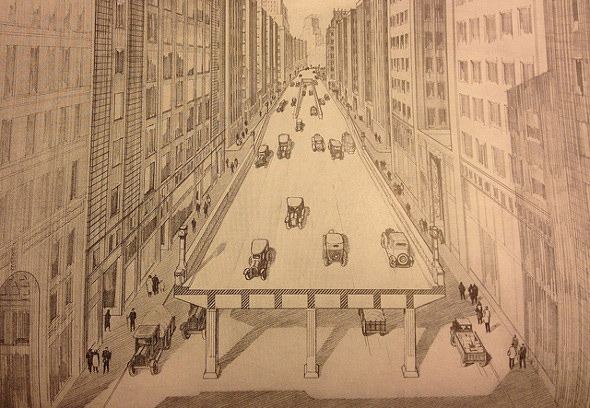 You know, of course, about I-695 and I-95 in the city - cancelled after residents from Hyde Park to Somerville raised holy hell and the governor canceled the plans and we got the Orange Line instead.

But a 1930 report by the Boston Planning Board (yes, back in the days when Boston had a planning board) proposed a series of new expressways and parkways, pretty much all with the purpose of speeding people downtown - in part through cross-town routes that would take traffic off the major routes downtown.

Our decaying infrastructure that's really too young to be decaying: Big Dig light fixture hanging by a thread

Harm caused to the Big Dig by two concrete-company executives who ordered workers to deliver substandard concrete was nowhere near as bad as prosecutors charged, a federal appeals court said today in upholding a judge sentencing them only to probation and community service.

Under federal guidelines for the fraud charges on which they were convicted, Robert Prosperi and Gregory Stevenson, executives at Aggregate Industries, should have gotten a minimum of 7 1/4 years in federal prison. The judge in their case, however, sentenced them to six months' probation and 1,000 hours of community service.

A day after we learned the alleged final cost of the Big Dig, the Supreme Judicial Court ruled the way the then turnpike authority shifted toll revenues to Big Dig construction costs was perfectly legal.

A bunch of turnpike commuters had challenged the money shifting, arguing it amounted to an unconstitutional tax, because they were paying for a new road system they might not use.

Where's Dr. Evil when you need him?

The true, final (well, so far) cost of the Big Dig is:

The end of Fort Point Channel

Stand on the Summer Street Bridge and look toward South Boston, and Fort Point Channel looks like a long rectangle, ending in a wall just past the Gillette plant.

In fact, the channel continues for a few more blocks, as a narrower drainage channel, ending at the Boston Water and Sewage Commission's Wet Weather Sewage Discharge Outfall Number 70.

No, not the Green Line extension. NorthEndWaterfront.com reports the Boston Conservation Commission is wagging its collective finger at the state over the continued non-existence of a usable dock at Atlantic Wharf on Fort Point Channel, despite a state promise to have one built as part of mitigation for the Big Dig.

But not because it was held up with rusty paper clips but because a car on the top level of a car carrier knocked into a bunch of light fixtures, the Globe reports. And isn't it nice to see that Big Dig designers paid homage to Storrow Drive by designing a tunnel with height restrictions?

The latest dirt on the Big Dig

The Globe reports frozen dirt under a section of the Big Dig is thawing out faster than expected, causing a cavern down there that is filling up with water.

Yes, of course there's thawing frozen dirt - engineers froze the dirt to make it easier to put in tunnel segments. State officials say nothing to worry about - the segment will act like a bridge if the underground lake gets too big - and no need to ask for legal help from an unfrozen caveman lawyer.

A gushing review of the Big Dig

The Globe gets a copy of an engineer's report on continuing water problems in the tunnels, such as a design flaw that's leading to cracks that let in water. Will require expensive repairs, natch.

That plastic must be pretty tough. At least they won't rust.

UPDATE: Apparently, the fact that plastic doesn't rust is just why they're in place.

$150,000 salary, not Big Dig lighting fixtures, might be too much of a strain for state transportation czar to handle

The Globe reports Jeffrey Mullan will depart as state transportation secretary this fall because he needs to make more money, not because of any concerns over his handling of Big Dig safety issues.

Mullan, however, issued a statement after the Globe report came out:

Reports of my departure as Secretary of Transportation this fall are premature.

Holey moley: Boston firefighters pull another worker out of a shaft

EMTs get injured worker to ambulance. Photo by BFD.

Boston firefighters spent two hours early this morning getting a state transportation worker out of a shaft connected to the Ted Williams Tunnel.

According to the Boston Fire Department, the worker plunged 20 feet down a shaft into a pool of sludge around 1 a.m.

Using ropes and pulleys, firefighters lifted the worker out after about 2 hours in the hole. He was washed down as part of a decon.

The worker was taken to Mass. General. The department says the firefighters who rescued him were not the same ones who rescued an MBTA worker at the bottom of a shaft last week.

The shaft. Photo by BFD.

The Globe reports MassDOT Secretary Jeff Mullan, who previously said he didn't tell the governor or the public about crashing, corroding Big Dig light fixtures to let his underlings get to the bottom of the problem, now says what really happened is that those underlings didn't tell him about the problem for a month.