Packie owners to City Council: Don't tax us more to pay for substance-abuse programs, just wait until pot is legalized and tax the hell out of that 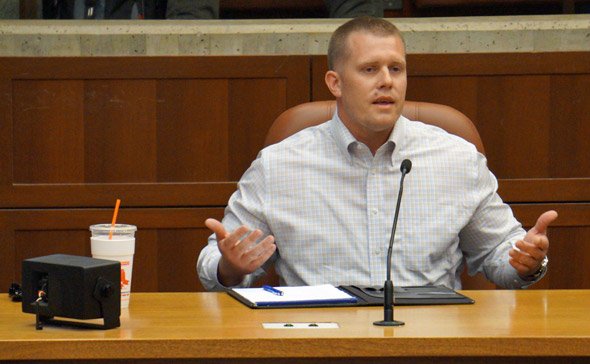 Substance-abuse experts and recovering addicts say a proposal by City Councilors Bill Linehan and Frank Baker to fund new treatment programs through a 2% tax on Boston alcohol sales could provide new beds - and new hope - to addicts who now have to wait long periods for help.

Package-store and restaurant owners, however, say it's unfair to levy a new tax on an already heavily taxed product, that Boston businesses would lose out to competitors in neighboring cities and that the tax would hit the poor hardest of all.

If the entire council agrees to the tax, it would also have to be approved by the state Legislature and the governor.

Linehan (South Boston, South End, Chinatown) said he proposed the tax because substance abuse has shown a dramatic rise in Boston in recent years, "it's eroding the foundations of our neighborhoods and "we know what to do, we need funds to do it." He estimated the tax would raise $20 million for treatment programs.

Baker (Dorchester), acknowledged "taxes are unpopular" but added "I believe we have to do something."

Matthew Walsh, 34, of Dorchester, agreed. He said he got lucky - his family was able to help him pay for a residential program out of state that has so far meant five years of recovery, after he'd become "a homeless street junkie." Other people, as soon as they detox, find no place to go and just return to the street, he said, adding he started drinking when he was just 9 or 10 before moving onto the opiates that left him homeless.

Linehan and Baker did not have specific programs in mind for the money. John McGahan, CEO of the Gavin Foundation, said Boston alone needs "hundreds of beds" in addition to what it already has to help people. McGahan and other treatment specialists told councilors that making addicts and alcoholics wait up to 19 days for a treatment bed - the norm today - leaves them too much time to relapse and just go back to the street.

Dr. Edward Bernstein, who has spent 40 years as an emergency-room doctor at what is now Boston Medical Center, says it bothers him to see "the lost souls" on Mass. Ave. begging for money. "Why should this be happening in one of the wealthiest cities in the world, in a medical mecca," he asked.

Steven Rubin, owner of Huntington Wines and Spirits, agreed the city has a substance-abuse problem. But he said the answer is now sticking another tax on his products. Instead, he said, the city should take a page from the 1980s - when it had a keg problem - and work with local businesses to find other solutions. And one of those, he said, could be to just wait until next year, when voters may consider whether to make marijuana legal - which could mean all sorts of new tax revenues for treatment programs.

Besides, he fretted, government rarely gives up a tax. "After alcohol is clothing going to be next?"

Frank Anzalotti, executive director of the Massachusetts Package Store Association, raised the specter of Bostonians fleeing the city for the tax-free state liquor stores of New Hampshire if the tax went through.

And like Rubin, he pointed to the possible marijuana referendum, which he said would mean "quite a bit more money than we're putting on the table today."

An officials with a national association of liquor makers dispensed with concerns about addicts, saying the working poor would be hit hardest by a "regressive" tax increase on alcohol sales, that Boston's liquor and restaurant businesses would lose jobs and business to other cities and that councilors should heed a 2010 referendum, in which Massachusetts voters repealed an excise tax on liquor.

Linehan, however, noted that while voters statewide might have done so, Boston residents voted 2-1 to keep the tax.

Other city councilors expressed concern about the ramifications of a tax on Boston businesses.

Sal LaMattina, who represents the restaurant-heavy North End, said he would be leary of anything that would hurt those establishments.

Josh Zakim, whose Back Bay/South End/Beacon Hill district has its own share of restaurants, agreed with Linehan and Baker that more money is needed for substance abuse, but that he would also be concerned about handing a competitive edge to places such as Cambridge, Somerville and even Watertown, which he noted recently got sort of crowned as Boston's Brooklyn.

Use the money confiscated from the drug dealers and the doctors passing out those opioid drug prescriptions instead helping their patients. ..

But the yield is likely to be pitifully small. This isn't Medellin or the Shan Uplands opium zone.

A friend posted an interesting article about addiction in my social media stream.

Someone wondered if lab rats would stop self administering coke and heroin if they weren't in miserable Plexiglas boxes lined with cedar chips.

And it turned out when their basic conditions didn't suck, they lost interest in the dope.

It could just as well be argued that this rat race, high stress imposition is a built in incentive to get loaded if there isn't much stimulus or reward in other available options.

Watertown is NOT Brooklyn in any way,shape or form!

Make him stop saying that!

I think there's a broad consensus that the state (I.E. Boston) should step and fund recovery as a public service where the health system falls short. But how did framing it as a question about levying a tax on alcoholic libations become the central issue?

Let's start here: What do we need the money for, and how much do we need? What will the demand look like when police chiefs stop arresting opiate addicts and refer them to the health system instead?

What is being done at the state level to address the question? Will we still have to provide the same resources and funding when the state (Gov Baker) has finshed his homework and produced a policy?

How should we fund the cost of providing readily available resources for opiate and other addicts seeking recovery?

The plan to assist those addicted to illegal substances (there's no wording in the tax that states it's strictly to treat alcohol addictions), by taxing a legal substance? Why just alcohol? Why not pizza? Lottery tickets? Popcorn?

taxing alcohol and tobacco is called a sin tax. they are both considered vices -- a practice or habit considered to be evil, degrading, or immoral. I don't agree with the moral judgement of the consumption of tobacco and /or booze but it's our history.

Are folks anticipating that the Commonwealth will try to implement its opiate recovery policy without funding it?

Consumption of tobacco and especially alcohol imposes negative externalities on the community at large. Increased Medicaid/Medicare expenditures, car crashes from drunk driving, violent drunken behavior etc. There's a real dollars-and-cents / quality-of-life impact to taxes like these; it's not just about making moral judgments.

that Boston businesses would lose out to competitors in neighboring cities and that the tax would hit the poor hardest of all.

That these statements were made in apparent seriousness...wow. Just wow.

I wonder what Dr. Bernstein thought when he heard that.

He owned the money quote for this article.

"Why should this be happening in one of the wealthiest cities in the world, in a medical mecca,"

Well because we're so busy coddling rich assholes and so afraid of Grover Norquist that we plumb forget to sort this mess out.

But don't you worry. 2024 will get a new bridge built to Long Island for the shootin' iron range and we'll have all those lost treatment facilities back better than ever.

Linnehan and Baker are on point and well aware of these VERY OLD problems .....what it now coined as a national epidemic has been taking kids from a few of our neighborhoods for years now......only a major issue now that it hit the burbs and corn fields.... No one cared because it wasn't THEIR problem.....well now they see it's all of ours and really.....what are we talking about individually.....what is 2% of the cost of a twelve pack or bottle of wine,,,,,wow $.40 on twenty bucks.....come on people.....REALLY??? Yep.....major issues for sure

it should be a State tax. Many of the people who need substance abuse help in Boston, are not necessarily from Boston, are they?

I can't imagine why people shopping or dining in Boston should fund this alone.

I'm not sold on this tax but

I'm not sold on this tax but the kind of people who would be unfairly burdened by this tax are likely ones who need these services...

As clock ticks down on the Orange Line, Boston adding temporary bus lanes to key Charlestown roads, shutting some roads to cars downtown and in JP and Back Bay
Wu looks at banning fossil-fuel use in new development, major renovation projects
Time was, you could rent an apartment, then grab some donuts for the celebratory road trip in your Chevy Vega
BPD captain who had been on paid leave for more than two years cleared of most charges
Rats running amok through Boston; residents, councilors demand action
No matter where on earth they roam, people will know Boston is their home