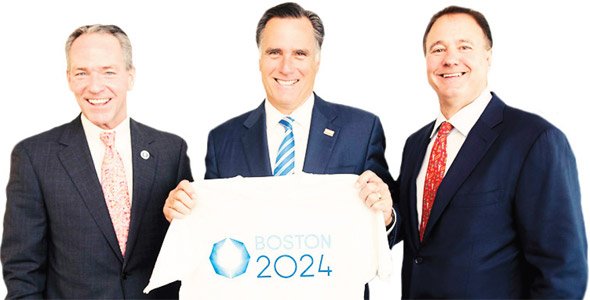 Fish, Romney and Pagliuca, from the Political chapter.

Boston 2024 today released the two previously withheld chapters of its initial bid documents that won us the right to compete for the 2024 Olympics (Political and Public Support; Bid and Games Budget).

Although Boston 2024 has repeatedly said - as recently as last night - that the games will be profitable - the previously secret Bid and Games Budget document said that would happen only after first plugging a sizable budget hole:

Based on the rigorous analysis conducted and continued USOC support, Boston 2024 has high confidence in our ability to achieve the revenues and manage the cost projections detailed above. Currently, Boston 2024 requires an additional $471M in revenues to support the Games. Boston
2024 continues to actively investigate ways to bridge this gap both by reducing costs and increasing revenues in areas such as sponsorship and ticketing. As Boston 2024 moves forward in the bid process, the budget team will work closely with the USOC to identify and establish plans to close this gap.

In the Political and Public Support document, Boston 2024, which now says it supports the idea of a referendum on the Olympics next year, originally pooh-poohed the idea:

The Massachusetts Constitution does provide a state-wide initiative petition process to allow citizens to propose laws for approval by the electorate. Utilization of such process by opponents to the bid is possible, but would require overcoming substantial obstacles including intense use of resources, significant financial expenditures, legal challenges and extensive lead time. Every cycle, many petitions may be filed, but very few end up on the ballot....

The initiative petition process generally takes a minimum of two years in order to satisfactorily complete the many burdensome steps. Although technically possible to have a ballot initiative in 2016, given the onerous process, any initiative petition advanced by opponents to Boston 2024 would likely not appear on the ballot before November 2018.

The document talks about how popular the Olympics would be here:

Bidding for and hosting the Games in the Boston area are generally popular ideas. Support is consistent across the Commonwealth, and over the past seven months, we have seen this support grow steadily as residents begin to learn more about a potential Olympics in the Boston area. In Boston alone, nearly 60% of residents favor the proposal to host the Olympics in the city, which represents a strong baseline of support garnered with minimal public outreach. Even before hearing details about the proposed bid, residents are receptive to the idea, and support jumps to a clear-cut majority after residents receive more information. Support is strongest among young people, African-Americans and Latinos.

Boston 2024’s formidable presence on social media illustrates this broad-based support - we currently have 4,200 followers on Twitter, our "likes" on Facebook have increased by 80% since August and after only one month on Instagram, the number of followers grew by 75%. ...

Four local activists formed a group in opposition to our bid, and while we respect their differing views and their right to promote them, our polling data shows that they do not represent the majority of public opinion. No elected official has publicly endorsed the group, they have not received significant financial backing and their efforts have been limited to social media.

However, the document includes a summary of polling results in which "significant" opposition to the idea of games here was found among older and well educated residents.

Neighborhoods:
Boston
Free tagging:
2024 Olympics
Ad:
Like the job UHub is doing? Consider a contribution. Thanks!

Another law imposes a fine of up to $50 for any
person who directs profane, obscene, impure or
slanderous language at a participant or official in a
sporting event.

Just thinking of how many Celtics games I've attended with Bennett Salvatore or Joey Crawford refereeing. I'd better write the state a $4,000 check just to be safe

Apparently that's not some wishlist item but an actual law we already have:

Whoever, having arrived at the age of sixteen years, directs any profane, obscene or impure language or slanderous statement at a participant or an official in a sporting event, shall be punished by a fine of not more than fifty dollars.

I guess the lesson here is to make sure to train your under-16 children to do the yelling at officials.

Deep in there (Budget p.13): they expect $ 1 Million from "a student movement that will support a lower dollar grass roots program."

Yes, students would give an average $100 each

Also interesting: $2.5 million from members of a Boston 2024 fan club and $3 million from donations that local companies would "encourage" their workers to make.

At least they're learning how

At least they're learning how Boston politics actually functions.

They need a new social person

Boston 2024’s formidable presence on social media illustrates this broad-based support - we currently have 4,200 followers on Twitter, our "likes" on Facebook have increased by 80% since August and after only one month on Instagram, the number of followers grew by 75%. ...

Likes and followers are generally weak and shallow KPIs that are often very misleading, especially when trying to use those stats to argue support for an organization or product. See: "Keep your enemies close..."

Give me a $10M budget, and I'll get them all of the (fake, made by some "social media factory" in Malaysia) social media engagement they could ask for.

In true political fashion, you'd be able to pocket $9.75 million of that as a "consulting fee" and still get them all the followers they wanted.

Especially when you consider services

that provide followers on social media for a price.

to convert all those followers and likes into cash! Good luck with that 2024!

Anybody want to fund a velodrome? How about some beach volleyball courts?

Yes, opposition has contrastingly not had "significant financial backing" since the only people who want the Olympics are the few construction companies and developers with deep pockets who will benefit. Boston 2024 is a coalition of the coerced and the bribed.

Pays to actually read these things closely, I guess: The original financial chapter actually had a $471-million hole in it.

budget versus actual cost of games?

So this is talking about 500 million defecit? I just don't understand how that can be taken seriously. The historical precedent is in the billions... https://en.m.wikipedia.org/wiki/Cost_of_the_Olympic_Games

Caveat: i'm way on the far end of europe, on vacation, and internet here is spotty. So i haven't read these.

One only has to read the opening paragraph

where our infrastructure is cited as one of the things that gives Boston its heartbeat. That's when the nausea begins and as you read further that's when the anger kicks in.

What also kills me is the way certain members of the one percent felt like they could once again bank on public apathy to try and slide this shitshow past. So watch when the IOC moves on how these scumbags will blame an ignorant public for saying no to them and their nefarious plans.

Love that pic of the Three Stooges. Romney as Moe, Fish as Larry and that lump of shit Pagliuca as Curly Joe DaRita.

Meanwhile, is our Mayah still feeling the higher power in Rome or is he hiding from this Friday doc dump?

Unelected, Not Elected, And De-Elected

Love that pic of the Three Stooges.

He's not worthy of Curly Howard or even Shemp?

I purposely used DaRita as he's universally reviled as a poor substitute for a real Stooge. Like doughboy Pags.

His build reminds me of Shemp

But his demeanor reminds me of Joe Besser. And I can't help but think of this short:

Truthfully, banking on public apathy is not that bad of a strategy. After all, Citizens United, etc. wouldn't matter very much if we had voter turnout rates of >80%.

I'm sure that this has already been raised in some of these discussions, but be careful about what you wish for with referenda. If this thing goes to a statewide referendum, it might go through. Every suburban farmers market I've been to this summer has a Boston 2024 table giving out all kinds of swag and with lots of interested people soaking up the pitch around it. The cynical strategy of pitting the suburbs/exurbs against the City is in full swing.

Doesn't matter if it wins statewide

If it loses in the City of Boston, it loses, period. Boston 2024 have stated this themselves, and the USOC and IOC are quite unlikely to support a city where a majority of voters have said "No".

"Boston 2024 continues to actively investigate ways to bridge this gap both by reducing costs and increasing revenues in areas such as sponsorship and ticketing."

Better start saving now if you plan to attend any actual sporting events.