Kris Haight is chronicling the construction of the Silver Line extension from Logan Airport through East Boston into Chelsea - where it will use a dedicated busway on what was formerly the Grand Junction railroad tracks.

Somehow this project is everything what the GLX isn't which is on time and on budget.

One thing that does bothers

One thing that does bothers me is "Why" this is being done so well versus GLX. Light Rail construction is not that much inherently more expensive building BRT. Meanwhile there are several advantages light rail have over BRT (mainly capacity). Yet, GLX is absurdly more expensive. It lends to an argument that we should just build BRT as being so much cheaper.

I have concluded the reason GLX is costing so much more expensive is outright price gouging from the contractor. In the exact same vein as those contractors who starts remodeling your kitchen then hike the price by 50% over the original estimate. It's not the stations and mitigations (as it's already priced in). Nor underestimation (as it already on the high end). Nor corruption - well in the politician pocketing money type. Just the contractor ripping us off.

But somehow this project is being done fairly while GLX is getting bilked. And the part that worries me that common memory is not going to recognize and remember that. Instead, it will conclude BRT is the cost effective future and any other mode is just unjustifiably expensive. Effectively never building but BRT for years to come even when we need the advantages of other modes.

I won't comment on why the GLX is more expensive, but compared to this project, it has much more things to take into consideration like bridge reconstruction (there's a few vs 1 on SLG), two GLX lines being built and the crossovers that have to be made. Plus layover facilities that have to be added. And GLX is far longer in length.

But that's all I'll say about that because I have my own opinions on the matter. But I agree, I think some of it is gouging on the contractors part.

As far as this project.. the railbed was pretty much un-used and overgrown (see my first set of pics from April). So there's lots of room for construction. The busway will live on an un-used ROW along the CR tracks after it meets the CR tracks at Broadway, so virtually no CR tracks need to be modified to accommodate the busway, except for a few railroad signals that need to be moved by the state. No layover facilities will need to be built either.

The bridge (Washington Ave) was deemed structurally deficient anyways, so they moved up the design and construction of that bridge to coincide with the SLG Busway construction (it's needed anyways to allow for a dual lane busway under the bridge)

The station designs are exactly as we (in committee) wanted them. Simple, and cost effective. But we're lucky, all of the SLG stations are at-grade and require no elevators to be built (Chelsea Center Station has enough room for a ramp from Washington Ave). It's meeting one of the project goals, which is to be cheaply done with short money.

This is a real easy win for us.. the question is more of 'why wasn't this done sooner".

But I do hope the ease of this project will turn people's eye to BRT done the right way (with a busway) as an easy win. I understand your point, but if this can be done with ease, why not other places that have abandoned ROWs?

And yeah, it's not a train.. I get that. I'd love a GL extension instead, but considering I have to wait in line to board a 111 for up to 30 minutes some days due to over crowding, I'll take a bus over nothing.

It's Nice To See This Project Moving Forward!

To clear up some confusion on

To clear up some confusion on my part, will this be a one seat ride from Chelsea to the Seaport District?

Yes.. via Airport Station (but no looping around the airport) 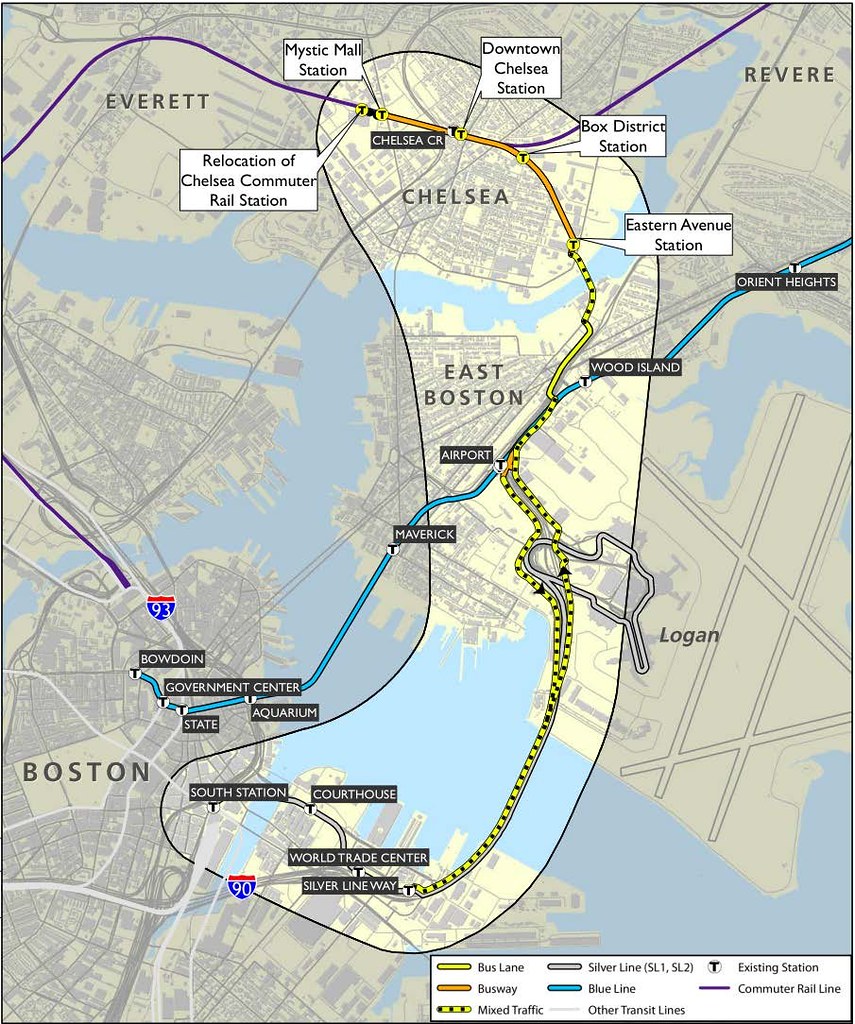 So will there still be the Silver Line airport loop or is that going away entirely and airport passengers should take the Logan shuttle busses to the Airport stop to wait for the Silver Line?

It will be the "SL6" route, which will be a new route that doesn't circle the airport like the others do.

Why not just reuse SL3 which

Why not just reuse SL3 which isn't coming back anytime soon?

Also is the SL1 AND "SL6" going to run from South Station? I can see this causing major confusion for tourists since SL1 stops at terminals but SL6 would stop at the "airport" station. Out of towners and locals alike not familiar with the silverline waterfront are already pretty confused when an SL2 or SLW bus comes through at South Station.

Yes both the SL1 and SL6 will run to south station. Why SL3 isn't used, no idea why. Maybe because it could some day come back, or be used for another SB run someday.

I don't see this much of being an issue. Tourists need to pay attention to the signs. It's not like there aren't other buses that don't go to the airport. The signs on the SL6 should say "Mystic Mall" as its destination point, and not "Logan Airport". Little confusion there. Riders just need to pay attention, like they do on the Green Line.

Regardless, even if a tourist gets on the SL6 instead, they still can make it to Logan Airport by getting off at Airport Station and switch to a MassPort shuttle.

Will there be free transfer from SL6 to Blue Line at Airport?

And if so, how will they reconfigure the station and fare gates to accomplish this?

The same way any other transfers occur (except South Station) along the Silver Line. (i.e. DTX, Chinatown, etc).

The faregates won't be reconfigured. The stop will be in the same area where the MassPort shuttles drop off now. Riders will still need to go thru the main fare gates to get to the BL.

Except (one presumes) in the case of a lengthy period of inactivity. The primary reason I assume is to avoid confusion with an old route in the case of sticky memory or documentation/map images that haven't been replaced yet. SL3 is still visible on quite a few system maps on operating cars and probably in stations.

Thanks Adam for the nod. 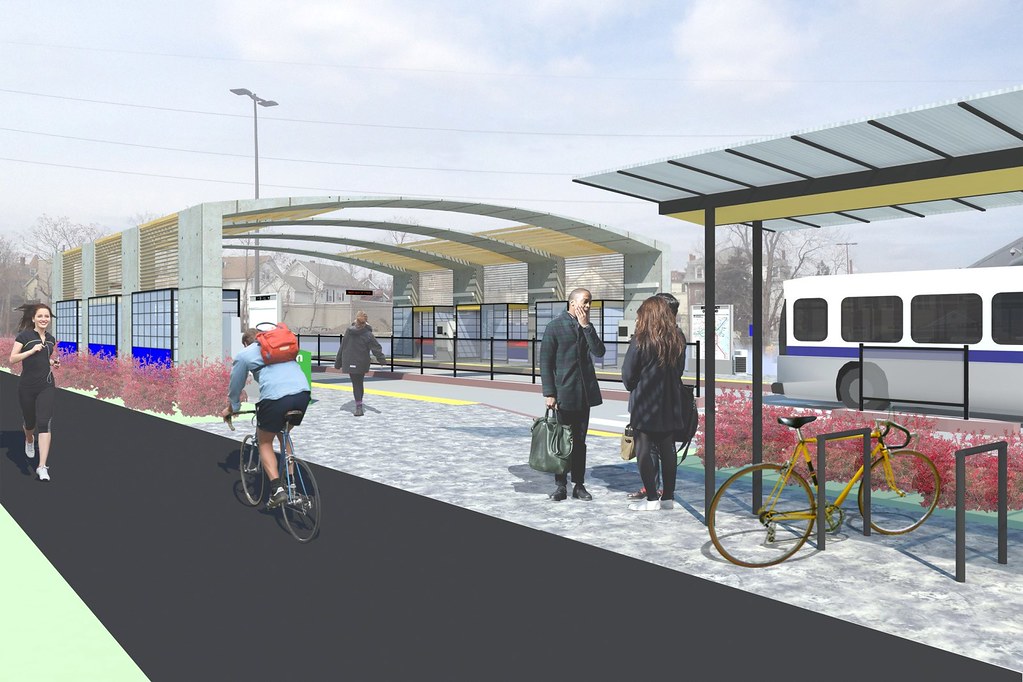 And the other view of the grading of the busway here (from Bellingham Street). 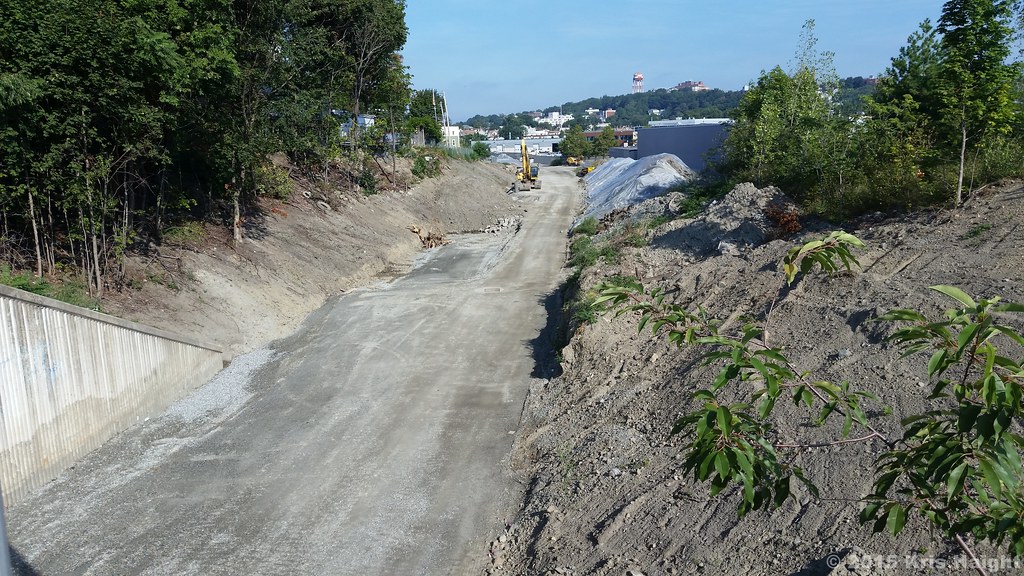 Previous photo sets can be seen at:

From the drawing, it looks like this project also includes a bike path? If so, where will this go to and from?

It will run from Chestnut Street Extension (near the Chelsea Firehouse, just shy of Washington Ave) to Eastern Ave. 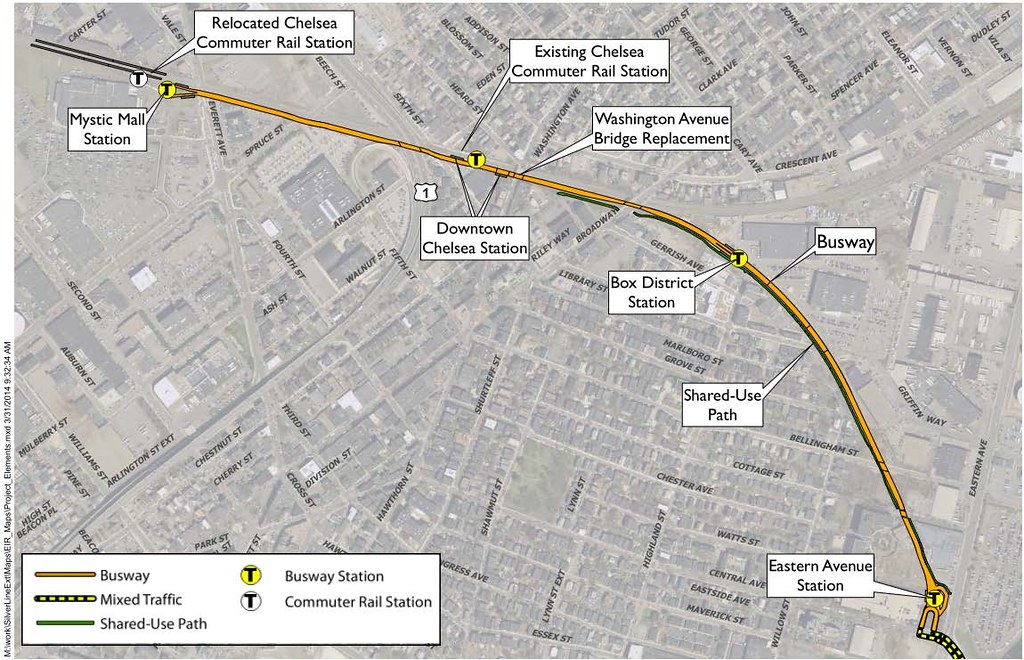 Why is the T moving the Chelsea commuter train station?

In order for the BRT station to fit and the CR station to be upgraded to high level platforms it has to be moved. There's just not enough room at the current station. The other thing is that when a train stops at the current station, it blocks an intersection, which causes traffic backups everywhere. When it's moved to behind Market Basket a train can fully wait without obstructing any crossings.

It's not totally in a dead area, it's behind Market Basket and near the new FBI building. Plus one of the ideas of this project is to spur some growth so by moving it may spur some growth around it.

The other thing is that when a train stops at the current station, it blocks an intersection, which causes traffic backups everywhere.

The last time that I got off there, they had everyone move from one end of the train to the other to deboard because they needed to keep the intersection clear for a series of emergency vehicles to get through. They were lucky that the bike car (which also had four chair users aboard) was in the "right" end of the train.

To add on to what others said

To add on to what others said the current station is also lacking a few other things. There are no close connections to other transit routes. It is difficult to get dropped off and picked up at this location. It clogs the intersections up when the trains stop. The "station" is pretty much a bench at this point, moving it allows for a better set up (anyone who has ever waited for the train in the rain could tell you how miserable the wait was with no infrastructure.)