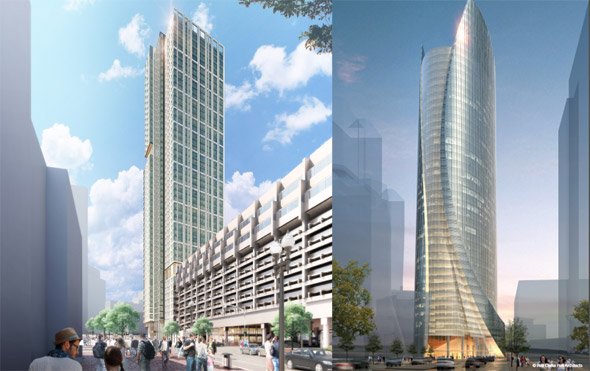 Designs even a hipster can love: Proposed residential and office towers for garage site.

The owners of the hulking Government Center Garage today submitted detailed design plans for residential and office towers they say will help lift Boston out of the design doldrums with assertive architecture they say will help put an end to our history of staid buildings.

In their filings with the BRA, HYM Investment Group and Bulfinch Congress Holdings say their proposed curved, 1-million-square-foot office building is "a world-class cosmopolitan building, where the future collective composition of buildings transcends local scale and context to create a built form that is decidedly of the 21st Century."

The building will be especially striking when lit at night as the graceful curves of the inner shell softly glow on the horizon.

The 31-story residential building, which will house 486 residential units - 64 affordable - is also a rejection of the old Boston idea of fitting in with the surrounding buildings:

Rather than emulating existing Boston architecture, the Proposed Project design will complement the city skyline with a fresh contemporary design based on resiliency and sustainability.

Part of that sustainability will come on the ninth floor:

In addition to improvements to the public Bowker Street Green, open space will be provided to residents in the form of roof garden or deck on the 9th floor of the Proposed Project. This space will act as an important outdoor amenity for the residents and tenants as well as a space for sustainable stormwater management. This roof garden or deck may also extend beyond the 9th floor and out onto the roof of the Government Center Garage. Another amenity space
on the 31st floor of the Proposed Project will offer leisure spaces for residents such as a multipurpose room, library, and roof deck.

The proposals call for 1,159 parking spaces - some new, some in a retained portion of the existing garage.

Developers hope to break ground in late 2016 or early 2017, with construction expected to last 38 months.

Portion of the garage to be

Portion of the garage to be retained? I thought the whole point was to obliterate that f-ugly anti-urban pile of expletive dumped in the heart of the city?

But even their earlier plans called for part of it to be retained. Look at the rendering on the left; it's still there - and the roof might become one of the amenities they use to attract tenants or buyers.

And having written that, I've gone back and revised my headline; because, yes, if they were really and truly sick of brutalism, they would have torn down the entire garage.

Will be completely hidden

First phase is the towers, but eventually the entire garage exterior will be completely overtaken by new development. Check out HYM's master plan for the garage - a longer project over several phases. The parts of the garage that will remain will be deep inside the "superblock" - hidden from street view.

Also, while I agree that the office tower looks Houstany, all alone in a plaza, that location has nothing else to connect to, urbanistically. The plans for the Canal Street side of the garage, the part abutting the Greenway, are far more urban in character - and actually very exciting plans. I think they made the best use of both types of spaces.

The renderings appear to show a circumcised and uncircumcised

design. As painful as it might seem it's still the architects choice.

Female or male? It isn't as clear as it is for the Torre Agbar or the Gherkin.

One residential (south), one office (north).

Why they are presenting them as two different proposals, I'm not sure.

Wait, isn't that exactly how we wound up with Government Center in the first place?

And that 21st century is apparently modeled on Houston - architect's renderings show the building standing alone, in the middle of a large plaza, rather than attempting to become part of the urban streetscape of downtown.

This isn't really true. Yes, the rendering on the right shows the neighboring buildings as kind of translucent boxes-- because it's supposed to be showcasing the new building, not the old ones. The presentation apparently included several images showing how the buildings will fit in with their surroundings, and you can see some of them over at ArchBoston.

This^^. The project, once

This^^. The project, once completed, will be attached to the part of the garage that they're preserving, and also to the new residential tower on Sudbury St. They're apparently adding more street-level retail to the in-between parts. The rendering looks like an empty plaza, but that's just to highlight the new construction itself.

Yes, as far as I can tell from the maps in

the proposal document itself, the new buldingS (there are two) will both exist west of Merrimack Street, and would hugged rather tightly by the streets that surround the block.

Neither proposal seems to show anything happening on the space east of Merrimack Street.

In other words, what is now one large bulk straddling Merrimack Street would end up being two different blocks separated by Merrimack Street. What would happen on the eastern block I don't know, but the western block would have a pretty strong street front, not plaza space.

Maybe we can get cool buildings just by selecting this option our BostonCity game. I'm in favor of nearly anything that restores

the apex of the Bullfinch triangle.

The garage has been been a long-standing blight on that area, and I'm astonished anyone ever thought it was a good idea, even back in the deeply misguided '60s. The combination of wall and cave cuts off Faneuil Hall from the newly invigorated (albeit somewhat prefab) life of North Station and the triangle.

Throw in some kind of restoration of what used to be the layout of Haymarket Square (even if only in a token way), thanks in advance.

I worked on the 11th floor of that building for many years and my employer still leases the 9th floor of the garage for our motor pool. The views from that space are spectacular and it would be an incredible public amenity if they ended up turning part of that space into a storm garden (hopefully open to the public at least during certain hours). And since it's part of my day job to know about these things, the storm water retention is actually a big deal and something I'm excited to see in this design.

Let's get this project going quickly, this will be a win for Boston.

they say will help put an end

they say will help put an end to our history of staid buildings.

That's exactly what they said about City Hall. Thanks loads, assholes.

In their defense, they said

In their defense, they said it wasn't staid. It's certainly not that. They never said anything about not being butt-ugly...

Can't go away fast enough, to state the obvious.

I am not sure that this tower will really create (re-create?) a west end neighborhood again, but it does go along with all of the development between North Station and New Chardon.

On the negative side, the never-ending construction and roadwork on Causeway will now be complimented by the same on New Chardon. What's already a traffic disaster (for cars, bikes and feet) will get worse for a few years.

Body found in Emerson building
All that frigid air means the Sumner Tunnel will be open this weekend
Not a good day for downtown tunnel entrances
Four charged with slicing, tasing, beating man on the Red Line in robbery attempt; one also charged for crowbar beatings, robberies on the Green Line
Man winds up under Red Line train at Park Street
Sunday sunrise