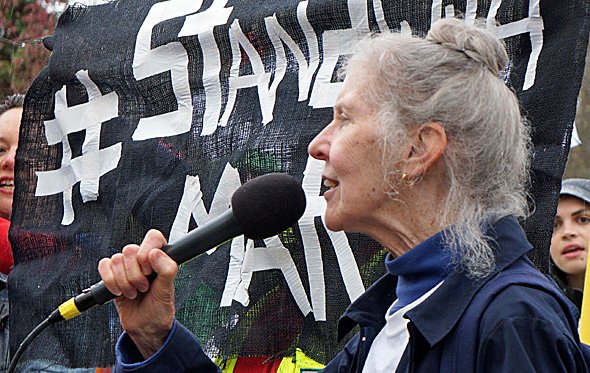 Protesters had planned to get arrested today to protest the construction of a high-pressure natural-gas transfer station in West Roxbury, but the company building it decided not to do any work today - despite what it had told nearby residents in fliers.

So instead, 200 to 300 people who'd marched from Draper Park to the site of the Algonquin Gas Transmission "metering and regulating" station at Grove and Centre streets pledged to "Stand with Mary" - Mary Boyle, a retired teacher who lives near the site - and do to the station and its associated pipeline what Berkshire activists managed to do to another Massachusetts pipeline and stop it, before it has a chance to explode and kill everybody who lives nearby.

Boyle led the protesters in chants of "We don't want it, we don't need it, shut it down!"

Nancy Wilson, another nearby resident, said she has no doubt that the plant and pipeline, if fully built, would eventually explode and then "we'll be ashes."

And the protesters tied red ribbons to the fence and gate into the site, where Spectra Energy workers were busy earlier in the week digging out dirt and rocks for the station, which will transfer natural gas from the pipeline being built from Westwood into West Roxbury into National Grid's local pipe network. Protesters were joined by City Councilors Matt O'Malley (West Roxbury, Jamaica Plain) and Michelle Wu (at large). O'Malley said National Grid wouldn't even need the pipeline if it would just fix all the leaks in its existing pipes. He said he will propose an ordinance that would force the company to begin doing that, in part by requiring it to fix any leaks whenever city crews have to open up a street for other purposes. "Something smells bad," he said. "It has a methane taint to it."

Protesters hailed the cancellation of Kinder Morgan's planned pipeline from New York to New Hampshire and New York State's refusal to allow a pipeline through the Catskills and vowed the West Roxbury pipeline is next.

A group of MassArt students built a model metering-and-regulating station to protest against: What began as a series of small protests by nearby residents in 2014 now attracts protesters from across the state. The lady doth protest too much, methinks

National Grid claims this pipe is needed to support a 2,540% increase in winter natural gas demand in Boston by 2024. That's not a typo. A 25x increase in gas demand, in a region where over 95% of homes & businesses are already on gas, and where our electric grid already is 60% dependent on gas. There is no credible argument for a need for this pipe based on demand. The National Grid filing is an embarrassment and they need to address this fictional fantasy demand projection, including how they plan to safely hook this new pipe into a leaking distribution pipeline system they are giving themselves 25 years to fix.
And by the way, the gas leak at the M&R station across from the blasting quarry that was reported in early January, is still leaking today. We could smell it.
See p 53 in this state filing: www.naturalgaswatch.org/wp-content/uploads/2015/07/Grid-Algonquin-Contra...

How else is the gas going to get from point A to point B ?

Or should we all pile into a big group hug and huddle for warmth like penguins do in the winter?

You know all them new residential developments all over town? There's probably going to be a gas-fired something in all of those buildings.

The same way it does now.

Then there are alternatives that will reduce demand - like requiring all those new developments to adhere to energy efficiency standards and include a solar component.

Energy efficiency is by far the least expensive way to increase capacity: http://aceee.org/research-report/u1402

They already do that except for the solar. Some high level of LEED certification usually/always (?) a requirement for permitting large developments in Boston.

Unless I'm completely illiterate, the projected increase in demand in the filings accounts for efficiency improvements at a rate of 1% demand reduction per year but banks on converting more customers to natural gas from whatever they're on now.

The words that caught my eye are "146,000 potential customers" in the city of Boston. I don't think even the most optimistic usage reductions in the existing customer base can get you that much throughput.

First, did you know that the West Roxbury distribution system leaks like a sieve? (See https://www.google.com/maps/d/viewer?mid=z52KVbz5H0oU.kyL0DxSvMy-0) Indeed, in some places pressure is down to 2 PSI rather than the 60 PSI it should be. So, the Brilliant Ones, rather than fixing these leaks, dreamt up this plan to pressurize the entire WR system with the WRL, bringing, perhaps, the pressure back to 60 PSI, but also increasing the rate of leakage. Not only does this pose an explosion hazard, but there are small amounts of benzene and xylene and things in gas. Benzene is a powerful carcinogen. (Natural gas ain't granola.)

There are similar leaks throughout the Boston methane distribution system. See http://goo.gl/rBi0E6 What leaks are near YOUR home? See http://www.heetma.org/squeaky-leak/natural-gas-leaks-maps/

If the utility companies plugged the leaks, there'd be no reason at all for the WRL. They don't want to do that, because it's more expensive to fix those than it is to build a pipeline and foist the cost onto ratepayers.

Second, it is cheaper to heat (and cool) homes using air heat pumps than using (explosive) methane. These run on electricity. There are state incentives for installing these, because of their greater efficiency.

Third, with sufficient build-out of zero Carbon energy (offshore wind, onshore wind, and solar, at residential scale, local community scale, and utility scale), it is possible to supply consistent and reliable energy, and motivate people to switch to electricity. Did you know that, at present, WITHOUT ANY SUBSIDIES, land wind turbines generate energy cheaper than any methane gas alternative? (See Lazard's LCoE analysis at https://www.lazard.com/media/2390/lazards-levelized-cost-of-energy-analy...)

We won't be having nearly as much demand for winter heating in a few years.

Interesting how these projections make some strange assumptions and ignore information that doesn't suit their model - kind of like their risk assessments that ignore the quarry blasting.