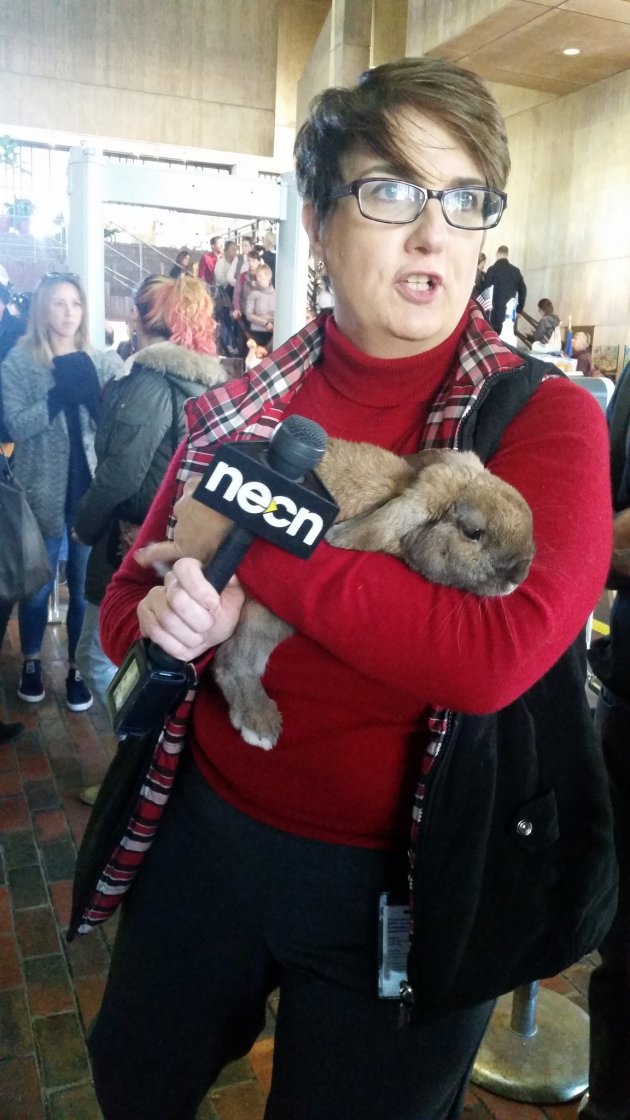 There's probably a good reason why, as Erica Fletcher shows us, NECN's Sue O'Connell brought a rabbit to City Hall to interview people voting early, and just as soon as we find out what it is, we'll let you know (Update: And we do, in the comments below).

The bunny is a registered voter. the Brookline Turkey on the other hand...

he voted for Hillary.

Most pets and livestock have more sense than to vote for Trump.

We need a fence all the way

We need a fence all the way around the border of our yard to keep dangerous foxes out!

These are troubled times

and troubled times call for a strong leader who will defend our country and make it great again.

Owslafa lives matter
No more letting hlessi into the country
No more hrududu-centric development in the city.

Is it a real rabbit, or is it

Is it a real rabbit, or is it just a Russian puppet?

Tune in to The Take at 6 & 7:30 on necn to find out!
Hint: It's been an anxiety producing election season!

I didn't see you there

I dropped by to vote and to photo-bomb the mayor during his press conference but I didn't see you.

Early voting results: City Hall was packed, at least between noon and 2 pm. Chinatown wasn't very busy between 2 - 2:30 pm. South End had a line all afternoon and it was taking people 45 minutes to vote. Very busy, and I ran out of campaign literature. (Yep.)

After I voted, I went up to a WBUR camera guy and said, "I'm John Keith and I'm running for office and my name is on the ballot, do you want to take a photo of me?" To which he replied, "No, I'm good."

Arrived at City Hall about 6:00. The line was looped around the steps in front of the magnetometer. It remained pretty constant while I was there. Total time was probably only 20 minutes. The line moved quickly.

There were no glitches in the process. All workers knew what to do. Communication was clear and simple. Very well done.

I am very glad Massachusetts implemented early voting. Even if this doesn't increase the number of people voting at least it makes voting far easier than rushing to the one voting place immediately after work.

Secret Ballot in a Voting Envelope with Voter's Name.

ASSISTING PERSON:
The voter needed assistance in marking the ballot and signing above, because of blindness other physical disability, or inability to read or to read English. I marked the ballot enclosed in this envelope at the voter's direction, when I was alone with the voter, and I had no other communication with the voter as to how he or she was to vote. The voter swore (or affirmed) the voter affidavit above, and I then signed the voter's name and completed the other voter information above. Signed under the penalties of perjury.
ASSISTING PERSON SIGN HERE:
1. __________
Signature of assisting person
2. __________
Assisting person's name printed
3. __________
Assisting person's residence

PENALTY FOR ILLEGAL VOTING:
The penalty for voting or attempting to vote in violation of section 26 of chapter 56 of the Massachusetts General Laws is a fine of not more than ten thousand dollars, imprisonment for not more than five years, or both.