When Boston still had white Christmases 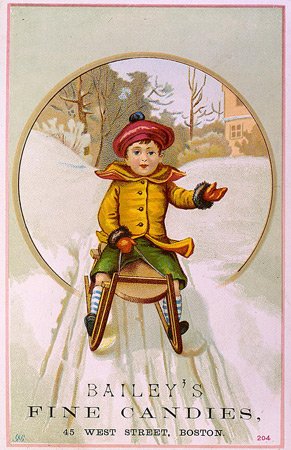 This ad, printed sometime between 1875 and 1900, is from the Library of Congress collection.

Bailey's. Years ago, shopping in Filene's Basement with my mother and then a sandwich and sundae at Bailey's. Splurging we went to Dini's.

I wonder if it's the same

I wonder if it's the same Bailys ice cream of Boston

Merry Christmas to Adam and all commenters!!

To Adam and happy holidays to all.

If I recall, Bailey's had two entrances, one on West Street and one on Tremont. If you entered by one of them (I forget which) there was a kind of long hallway/gallery where you could buy cards, candies, small gifts, etc. I also remember the Tiffany lamps, maroon flocked wallpaper, marble tabletops and heart backed chairs. And the ice cream sundaes in the silver dishes of course.

Bailey's was the place to get

cream cheese and olives on white bread, followed by a dish of the best chocolate chip ice cream on the planet!
And proper ladies didnt take off their white gloves while eating /

Myth and Truth about Bailey's

From Tremont St. was the long gallery with the cards, etc. The entrance on Temple Place (not West St.) opened to the candy store with the soda fountain towards the back up a couple of steps. I worked there for a bit in the late 1970s. I think there was an entrance on Winter Place as well. We used to get salesmen from Homer's Jewelry, which is another lost Boston store, for coffee, who recruited me as a messenger. Good times at near minimum wages.

When I mention I worked at Bailey's I get more stories from people who loved the place and more mythology than your average disappeared business. (Nobody remembers or cares about Homer's Jewelry.)

They made some of the candy downstairs in the basement. I also worked in the Harvard Sq. store on Brattle St. The Temple Place store was the HQ store. Harvard Sq. was busier and looser, especially nights and weekends. We could showboat making sundaes in Harvard Sq. They did not like that at Temple Place. They had stores in Wellesley, maybe Belmont, and a couple more in Boston. One on Boylston between Arlington and Berkeley and one on Franklin St.

Bailey's was definitely an old-school candy and soda fountain business that probably didn't change much from its original setup, except maybe to electrify the lighting and update the dishes. The sundae dishes were stainless steel, not silver when I worked there. Its possible that the soda glass holders were silver plate, but I wouldn't count on it. They were bought for their locations (H. Sq and Wellesley mostly), not the business itself which I think was marginally profitable near the end and so it was shutdown after the sale.

They had way more panache than Brigham's. BTW, probably the closest place I know in spirit to Bailey's is the Sundae School down on the Cape, especially the Dennis location. Same chairs and tables as Bailey's and lots of old timey soda fountain vibe.

Call it whatever you want, but winter's just not what it used to be in the good old days.

Not a sign of cold. We still have a cold enough climate to create snow, and a lot more moisture from warming for it to work with.

The last of the storm moves out
Man stabbed in the neck near State and Congress downtown
New Hampshire man gets to fly his 'Christian' flag over City Hall Plaza tomorrow as City Council begins work to ensure he can never do so again
More trouble at old Government Center Garage site: Four-alarm fire
This isn't Times Square on VJ Day and you can't just grab some random woman and kiss her, man learns on the Green Line
Kid learns train conductors can ask his shorty where she's heading