Ancient and Honorable Artillery Company being called into battle - in court, over its annual cannonade on the Common 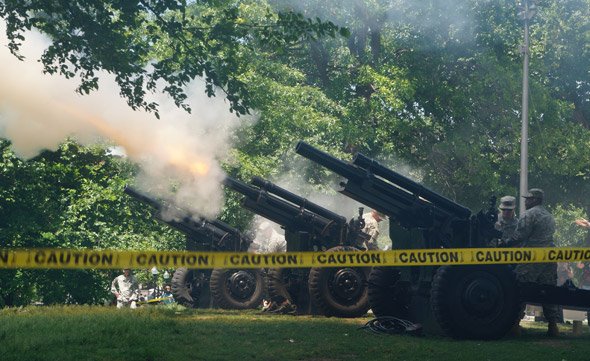 Annual ka-booming on the Common (photo from 2016).

A California man who claims he suffered permanent ear damage from one of the Ancient and Honorable Artillery Company's annual June artillery barrages on the Common wants $20 million in recompense - half from the historic group and half from the National Guard.

In a lawsuit filed Friday in US District Court on Friday, A. Michael Davallou of Los Angeles says he was a visitor to our fair Hub on June 1, 2015 and had no idea that when he "wandered onto Boston Common" that the Ancient and Honorables were in the middle of their annual change-of-command ceremony, which always includes an artillery barrage by active US military personnel from the top of the Soldiers and Sailors Monument hill.

Davallou says nobody warned him to stay "a safe distance" from the artillery and that when the troops fired the guns, he suffered "serious and permanent personal injury" in the form of hearing loss and permanent ringing in his ears.

Davallou's suit charges the Ancient and Honorable company was negligent both for not warning the public of imminent booming and for:

Causing, directing, arranging, organizing, supervising and controlling the firing of military artillery in close proximity to civilians in a public park when it knew or should have known that such firing would produce noise and sonic waves sufficient to create a risk of severe and permanent injury to the public including plaintiff.

The Army National Guard is equally to blame for participating in the event, he alleges.

Davallou is a 2000 graduate of the Harvard Business School.

Davallou is a 2000 graduate of the Harvard Business School.

He ought to be very familiar

He ought to be very familiar with the sound of a big bubble bursting and crashing.

And the tens of thousands of

And the tens of thousands of people at the 4th of July Pops concerts suffer similar injuries each year from being in similar proximity to howitzer fire? Not buying it!

The difference is the

The difference is the direction of the barrel. Generally, when firing a ceremonial or demonstration weapon you want to have the audience looking the same way your fire so that the noise and any projectile is going away from them. Hence the howitzers facing over the river to keep people safe.

I wore ear plugs while firing a musket and it could be loud if you over loaded by accident, but that is usually because the buildings around the area were amplifying it.

Stick It In Your Ear

Typical Harvard Business School graduate. They should have aimed the cannon at him with live shells.

I happen to know some very nice HBS grads

Can we open a civil case against Davallou for making us all stupider for reading this lawsuit?

At least he (or his lawyer) realized that suing a ceremonial non-profit like the Ancient & Honorable for $20 million is pissing into the wind, and included the US Army in the suit.

Not the U.S. Army. The MA National Guard.

I'd originally cited the Army but changed that to the National Guard.

I believe Those are the howitzers on the esplanade. The ancient and honorable uses period artillery with a costumed regiment.

I was standing nearby taking the photo and did not incur any ear damage!

It's kind of hard to miss these guys and what they are doing as they shout orders and load the cannons.

Is there a second barrage from up on the hill?

Yep, they get loud on the Common

I followed the Ancients and Honorables around that day and part of their march included stopping on the Common where, yes, guys in military fatigues fired off those howitzers. And I was stupid and stood really close to them and had ringing in my ears for 20-30 minutes afterwards.

Guess they do or have used the howitzers. The group I saw was in from RI. Thought they came every year, but maybe it was a special event.

And probably not as loud as the howitzers.

You should join the lawsuit! :-)

How close were you to the cannon when they were fired? Was it a distance where one would not know that there were cannon about to be fired?

Oh, I was right up there

Like ten feet away. I knew they were going to fire the things.

from around here, but I work near the common, and even though I am already hard of hearing, my first experience of the cannons was last year......i found it to be L O U D AF!!

I love the things Boston does which are weird, like firing off cannons, AND I can't help but think it is possible that sound could have injured somebody

Agreed. He could have a valid claim.

We have safety measures for lots of other hazards but noise pollution is just not something most people are concerned about till they see a loved one going deaf or they’ve start to lose hearing themselves.
Sort of like a lot of people who look the other way and don’t object when smokers smoke too close to them till they develop asthma or sinus headaches or other health issues or someone they care about does.

Thankfully mine cleared up after I had it as the result of getting hit from behind in a car.

I'll hold off on deciding the merits of his case but I will say it's not unreasonable to seek compensation if your hearing was damaged.

Is $20 mil too much? Depends. I know I'd value my hearing in the millions.

I feel bad for the squirrels,

I feel bad for the squirrels, birds and dogs.

He should move to the

He should move to the Charlestown Navy Yard for some additional local flavor but would probably sue the realtor and the US Navy.

It's the sound of Freedom!

Citizen complaint of the day: Round, mean mugging turkey downtown
Spare Change Guy, long a croaking presence around town, dead at 68
Latest Boston crime movie takes a few liberties with the local geography
Green Line trolley derails or not at Park Street, but the end result is the same: No service
One can only imagine what shape Morrissey Boulevard is in
Advertising company sues over South Station construction; says it shouldn't have to pay for ad space nobody can see due to skyscraper work