Susan Vittorini posted the sign this morning: After 50 years, Diane's on Poplar Street will be closing for good on June 8.

Vittorini, who has worked at the bakery for 43 years, said owner Bob Anderson decided it was time for a change after years of getting up at midnight to make the pastries and croissant sandwiches. Anderson has run the shop alone since his father, Bob died in 2016; the Andersons have owned the bakery since 1968.

Vittorini said she will miss the customers who have been coming in for decades - she now serves grandkids of people who themselves have been long-time customers. "I'm very sad," she said. "I love my job."

Diane's closing leaves only Fornax on Corinth Street as a working bakery in Roslindale Square - and it concentrates on bread. The past ten years have seen the closing of A. Boschetto and Vouros on Washington Street and John's on Poplar Street. Bob's Pita remains, but it no longer makes its own pita. 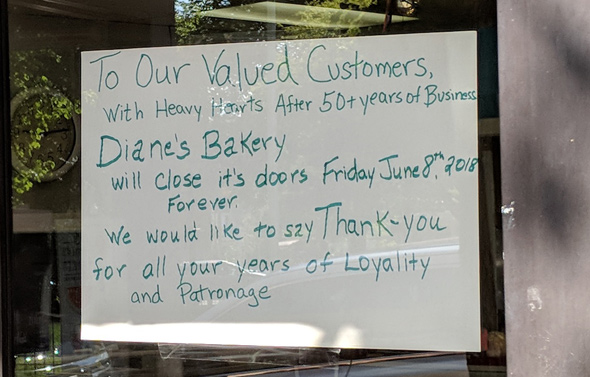 I was in there last week and wondered how much longer it could last. I knew that place was too good to be true. Cake.

One thing Bob the Baker did better than anyone was his "all butter" rolls at holiday time: round, fluffy yeasty, buttery rolls that were perfect for mopping up gravy on the Thanksgiving plate. Just as Sugar Bakery on Centre Street preserved Hanley's "brambles" after Hanley's closed, I hope Kim and Chris Fallon at Fornax can find a way to preserve Bob's "all butter" rolls during the holidays. It's one of those special things that people associate with Roslindale.

Love this place! So many kid birthday cakes, Saturday morning croissants (best hangover cure eva!) bread, pastries. What to do now? Not too many places left where seniors can go to get a cup of coffee, split a walnut goodie and have a chat or where you can take the kids for a treat and still have change from a $10. I've noticed that even with all the folks going to the farmer's market on Saturdays, few if any made their way across the street to Diane's, maybe that was part of the problem. Where will the older folks who come in to get a cup of coffee and a little something sweet while they catch up on the latest with their friends go now. I guess Dunks is it. Best wishes to Susan and everyone at Diane's, we'll be in as much as possible to get our spinach egg and cheese croissant fix while it lasts!

There was no problem

When Bob passed away, the writing was on the wall. I feel bad for Sue and the regulars, but if the son wasn’t up for keeping the business going, it was bound to happen.

Of course, if some enterprising Baker is looking for a spot, I hope they consider this great place.

I remember when they moved to

I remember when they moved to that location from JP so many years ago. I found my love of half moon cookies from Diane's. I wish everyone well.

Now maybe we can get Flour to open in the Square!

I've been a patron of Fornax for many moons but unfortunately I feel like their product has gone down hill in the last 5 years. I now only purchase a coffee and an occasional scone because of this. Bums me out b/c there is nothing like a really great bakery.

At this point is almost unrecognizable. Truly sad!

In your image and likeness

While there have been many positive changes to the Roslindale business district, the new ideas may not always work. The effort to have small, privately owned business may be a great idea but so far, the long-term health of that concept has not been as productive as desired.

Some of the "newer" business efforts in the business district prospered for a while and when the novelty wore off they closed. It seems that many only lasted 2 through 7 years in general.

There is a fixed commodity in the user-public that will patronize the "trendy" places, and with the older population being priced-out or moving-on (or passing on) the older businesses are losing as well. The gentrification of parts of the population also contribute, i.e. fewer places for lower income people to shop afford-ably.

The upswing in property prices have also brought out the bad in some commercial property owners that has resulted in an upswing in commercial rents. This continues to price out both long-term established business as well as the newer "trendy" mom-n-pop shops which cannot keep up as their business levels off or drops. So the stage has been set for a downward spiral.

Select Cafe, Marla's Obsession, Diane's, Unleashed -- all combos of private and chain operations but the list of vacancies continues to go up. And now Harvest is on the edge with one foot in the grave and the other on the proverbial banana peel.

I found it interesting reading UHUB and social media regarding all of the exchanges about the new Target store. Most of those against it wanted "small business" or "mom-n-pop" business, yet a majority seemed to want Trader Joes, Whole Foods, and similar -- all of them large chains in and of themselves in their own rights. So for this writer, the issue was never about chains, but NIMBY snobbery favoring the interests of the somewhat upper-income transplants to Roslindale.

Those people will not miss Diane's Bakery. It was not gluten-free enough for them. Those that grew up in Roslindale knew what they had, and embraced it. They had no desire to make changes because the system worked, and worked well. Sometimes making changes in your own image and likeness is not a positive thing.

Can we not throw every single closed business into a single pile and say they all closed for the same reason? This is not the 1970s and Roslindale Square is not being killed by malls in Dedham or wherever. The reason Select Cafe closed had absolutely nothing to do with the reason Petco closed, or the reason that Sugar (which replaced A. Boschetto) closed.

I will agree that rapidly rising rents are as big an issue in Roslindale Square as in far trendier spots elsewhere in the area, though - that's why Vouros is no more, for example.

Birch Street, where the "trendy" stuff has been in the Square, is an interesting case: It remains "trendy" (where else are you going to find the wine store right next to the cheese shop?) even though the stores have come and gone over the last 15 years or so.

Something to do with sugar innit?

You are missing the real story here

Diane's isn't closing because the business failed or because a greedy absentee landlord jacked up the rent. What happened is the longtime owner died, and now his son doesn't want to bake anymore. The son recently sold the building to cash out on the equity in the property. You can't blame anyone for that, whether newcomers or the son himself.

The son could get money for the bakery business (separate from the building) from a new owner, and keep the business going after he sells, if he were to engage in some transition planning.

Many mom & pop businesses simply close up shop without realizing their business is worth something to a community and to a new owner who would be willing to pay the owner something to take it over.

And, yes, where people spend their money ultimately determines what businesses thrive or die. So if you like places such as Tony's Market and Roslindale Hardware, ask yourself: when is the last time you shopped there?

Local retail is brutally hard now - the successful commercial tenants in Roslindale are restaurants and services, not retail.

Nothing to do with how many old school lifelong Roslindale residents shop where or how people who moved here 15 years ago claim credit for the 'new' Roslindale.

They will price match the

They will price match the remaining local businesses (to online target) to death.

I kind of wondered how much longer Diane's would last. Fornax is a bread bakery and sandwich shop, and does well because it makes excellent bread and sandwiches. It has also does well attracting both the "new" and "old" Roslindale. Diane's seemed to truly be an old fashioned bakery that served only sweets or savory baked goods like croisants. I'm not sure that business model is likely to survive anywhere. The new "hip" bakeries like Flour and Tatte are really restaurants that also serve excellent baked sweets. I doubt that we will be seeing either of them in Roslindale Village unless the week day lunch crowd gets considerably bigger and wealthier. The number of places in Boston that I can think of that are truly just bakeries is a pretty short list. A nice coffee shop would be a good addition to Roslindale Village, and perhaps someone can take Diane's space and pursue that concept. Something mom and pop would be cool, but I wouldn't cry if it was Starbucks.

I've definitely gone to Fornax for a big mix of sweets to put out at a party, or for dessert, or whatever. But a bakery like Diane's that closes at 3pm can't even sell to the commuter crowd, so they HAVE to do well for lunch.

There's a coffee shop where Vouros was

And that's at the end of the block from Diane's.

I suspect the original commenter was thinking more of a place where you could sit with a cup, rather than anble out with a bucket, though.

You can sit with your bucket

Admittedly, the place is not set up with tables for people to set up an office while they get their caffeine fix, but it's a step up from Dunkin Donuts.

New place on Corinth though...

Where Marla's/the insurance company used to be - that's going to be lunch/cafe/performance arts space, right?

I wish them the best but that seems about as likely to survive as the comedy place going in where Yang's used to...

cash only and closed at three

I will miss them but it was often the case that I didn't go because
1) I didn't have cash on hand
2) I couldn't get there in time for 3
3) I got there with cash before three but the case was empty (this mostly after the baker passed away).

I think they could have taken a few small steps to make it easier for people to spend money there.