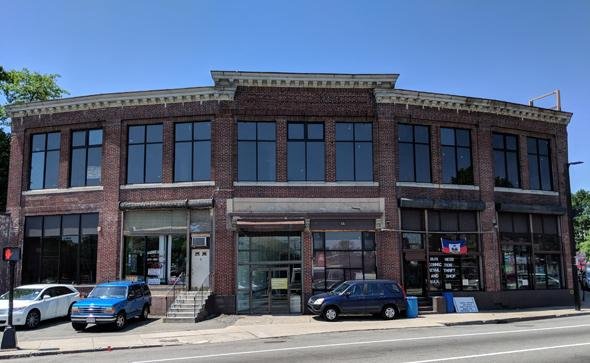 Building is getting spiffed up inside and out.

UPDATE: They got both a food and liquor license.

The Boston Licensing Board decides tomorrow whether to grant a food-serving license to a proposed 240-seat restaurant that would serve barbecue, steaks and even some vegetarian dishes on Blue Hill Avenue where it meets Harvard Street and Talbot Avenue.

Partners Boris Sapozhnikov of Worcester and Wayne King - who already runs a chiropractic and physical-therapy clinic in the building - hope to open Royalty Iron Grill by mid-June. In an interview inside the proposed restaurant at 881 Blue Hill Ave., they said they've been working on outfitting the space since last year as a dining destination for an area that now has nothing comparable, complete with a patio and valet parking - and a unique indoor waterfall and pool left over from an earlier restaurant in the space:

King allows as how the current waterfall mural and ceramic lion don't exactly whisper "elegance" and says he'll likely change those before the opening.

The restaurant will feature an array of Southern-style barbecue items, all smoked in house, along with all the fixings. The pair say they've already hired a couple of workers away from the Pit Stop in Mattapan. But they emphasized they will have a menu that will include everything from chateaubriand steak to burgers, as well as some vegetarian options. A separate room will be devoted to take out and Uber deliveries.

King said he has plans for after-church meals on Sundays - members of nearby churches would get specific times and discounts so they could dine with their fellow congregants. Sapozhnikov is looking at the idea of letting people order their sit-down meals online - so they would be served soon after they arrived.

In addition to the 4,600 square feet of indoor space, the two asked for permission to run a 400-square foot seasonal patio. Their proposed hours would be 6 a.m. to 11 p.m. (10 p.m. for the patio), which would also let them potentially offer breakfast.

Along with a food-serving license, they applied for an all-alcohol license. Whether they get one from the board tomorrow, however, is doubtful, since the board long ago doled out its last license. But King said he is optimistic the state legislature will agree with a request from Boston officials for more licenses - including a number set aside specifically for Dorchester - later this year.

Eventually, Sapozhnikov and King said, they hope to offer live entertainment, but they said they want to get the food and service right first.

The glassware's ready to go: 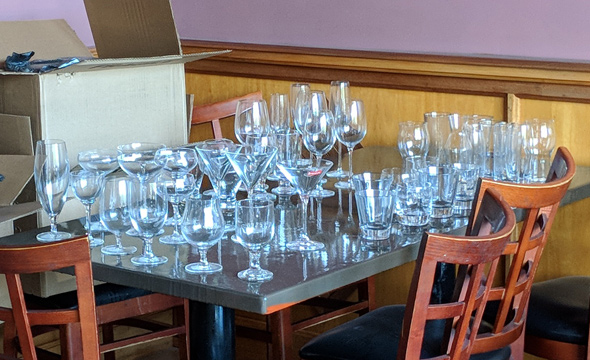 I don't know what it's like to work at Pit Stop but I find it a little unseemly for the applicants of the new place to boast that they are hiring people away from there. I believe it's called "poaching" in the business and strictly frowned upon. Often, the person hired away comes back hat in hand looking for their job back when the ambitious new venture fails. A better approach for the applicants would have been to say "we have hired experienced barbecue workers from the area." This makes me want to support Pit Stop more, the new place, less.

Aren't you the conservative voice on here? They didn't capture them at gunpoint. They likely offered better pay and benefits. Thats pretty free market.

Agreed. I'm all in favor of the free market and wish the former Pit Stop employees and the investors of the new place all the best. I just think it's tacky at a minimum to say that we're hiring people away from our long established competition, one of the city's most venerable barbecue spots. Free market all the way, we'll see what happens with the new place.

A "free market" guy who doesn't know how business works?

Agreed. I'm all in favor of the free market and wish the former Pit Stop employees and the investors of the new place all the best.

Fishy, whenever people leave a business to start another business of the same type, they try to take the best of their coworkers and their customers with them. This is true of everything from chefs to tech workers to hair stylists to dentists. I'm surprised that this is apparently an unfamiliar concept to a free-market guy like yourself.

He didn't say that it was rare

He said it was tacky to brag about it.

Good restaurants raise everything around them and often beget more restaurants and more good vibes for the neighborhood. Hopefully they will figure out what the tiger & waterfall place did wrong and make this a success.

What was the previous fancy restaurant in this space

with the waterfall, etc?

I tried Googling "Savanna" (the name on the waterfall and the mural behind it) along with the address and not the address and anything I could think of, but I found nothing.

Good for them for trying, we shall see who is buying

A for effort. 240 seats is big, have either partner owned a restaraunt before? Hopefully they open by Sept.

I am glad they will offer valet parking. When I pass that section I see a bunch of cars double parked all the time. I hope they don't add to the problem.

If Boris' and Wayne's real life experience are as chiropractor and physical therapist, they'll need a lot more than a couple of talented pit cooks to successfully run an elegant, 240 seat restaurant.
I wish them well but without a lot of front of the house and kitchen talent, they may be aiming to high for their first restaurant.

King's background includes a degree in either hotel or hospitality management, so he's not completely unaware of such stuff.

Wasn't that place a chop shop at one point? Nothing like eating on a patio with a view of a tire shop or abandoned building.

But, yeah, it shares a parking area with a tire shop. They're planning to put up shrubs and stuff to separate the patio from it, which can work better than you're probably thinking (ask the people who eat outdoors at Redd's in Rozzie, which is right next to a parking lot).

Dorchester man who was shot at South Shore Plaza has died
For second day in a row, fire breaks out at Morrissey Boulevard hotel
Fire hits Morrissey Boulevard hotel
Police hunt driver who hit pedestrian in Grove Hall, then kept driving
Court upholds conviction of man who raped a woman in Dorchester, then used her phone to call 911 because he wasn't feeling well
Andrea Campbell thinking of running for attorney general