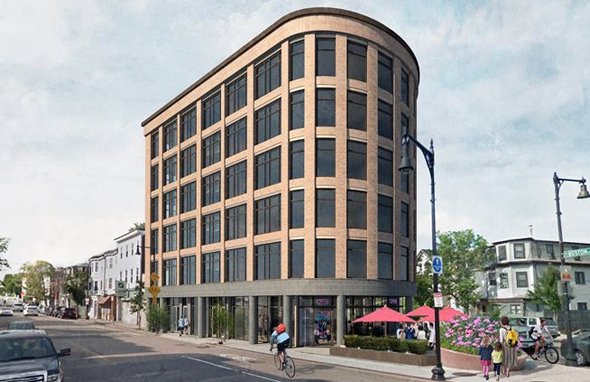 The Board of Appeals yesterday approved a six-story, 24-unit apartment building on Dorchester Avenue where it enters Andrew Square.

Developer Christopher Roche's building would include ground-floor restaurant space. The building will have no parking, both because of its location on the other side of the square from the Red Line stop and because the lot's configuration - it sits on a wedge of land - would make any vehicles exiting a menace to themselves and oncoming traffic. The BPDA approved the project last month.

Of the 24 apartments, 22 would be one-bedroom units between 502 and 581 square feet and two studios of less than 345 square feet. Four of the units will be marketed as affordable.

Nobody spoke in opposition to the proposal; representatives of several elected officials said the local civic association is looking forward to the replacement of the current auto-glass garage as a way of helping to revive Andrew Square.

But board member Anthony Pisani, an architect who reviews each application's plans and who usually pronounces them "adequate," called Roche's plans "discouraging" - not because of anything Roche did but because they fit in with a BPDA policy he said is going to lead to ever shrinking apartments, making Boston even harder for families to stay in or move into.

Because the units are all smaller than normally called for in city regulations - which set a minimum size of 450 square feet for a studio, Roche had to provide some common space for residents. Current BPDA guidelines call for 35 square feet per unit, which in this case meant an 800-square foot common space on the second floor. Pisani said that because the amount of common space per unit is not tied to the size of the units, the result will be to encourage developers to shrink their units even more - since a 200-square-foot unit is penalized no more than a 340-square-foot unit, Pisani said.

Roche's attorney, George Morancy, said Roche could have easily just submitted plans for 24 studios by removing a wall from each apartment, which would meet city guidelines, but added it's not his place to argue BPDA policy, just to comply with it.

Kinda just screams . . Welcome To The Polish Triangle!, doesn't it?

There's nothing unique architectually about Andrew Square. It looks like the rest of South Boston. Nothing about the neighborhood said "THIS IS THE POLISH TRIANGLE" save for, what, two small Polish grocers and a church.

The funny thing here is the demand for "community space" when the only people who loiter in Andrew Square are those touring Methodone Mile. The last thing we need is more junkies hanging about.

It's really common space just for the residents. I'll change the reference.

do not want to live at the starting gate to methadone mile. As for providing zero parking spaces, anybody living at this address should not get resident parking permits because they'll be taking public transportation and have no need for a vehicle.

So "anyone at this address will take public transportation and have no need for a vehicle"? What a large load of nonsense. Believe or not some people who live near the T do need a car and do have a car and, and in this neighborhood, should qualify for a resident sticker. There are many many reasons why some people choose to have a car or need to have a car. Not all work hours correspond with the T being open. The T doesn't go everywhere people want to or need to go. The anti-car extremists need to realize it is legal and sometimes desirable to own a car, even when you live near the T.

Sure, but why would those

Sure, but why would those people opt to live in a building with no dedicated parking?

There are plenty of people living in Andrew Square who have cars and who opt to live there without dedicated parking. Just look around. Your comment makes no sense at all. I for one chose to live where I live , chose to have a car, and park it on the street. Same goes for thousands and thousands of people in Boston.

Great point. So why are you

Great point. So why are you entitled to buy a home that is--presumably--somewhat cheaper because it doesn't include that dedicated parking space, and then park your car on the street, but buyers in NEW buildings are not?

Perhaps they won't need one but they're entitled just like anyone else. The thing about Southie neighbor permits is that the residents use them to drive one mile from their house to the T, or to hit the bars near the channel.

The builders, as part of their approved plan, are requiring tenants / owners to contractually give up their ability to get a permit and commit to not owning a car in the area.

where does it say that?

I can't find it. But it wouldn't work even if they tried it.

That's right! Postal workers too. Witnessed a woman leave her car on Melcher St. with a suit case and headed to South Station.

Pisani doesn't get it.

This housing fills a small portion of a huge demand -- lower cost, smaller, no-parking housing near the subway. Boston needs literally 1000s (10,000s?) of small, car-free units for young-person workforce housing. It will contribute substantially to our economy, both in the macro sense (more total jobs) and in the micro sense (these kinds of tenants spend their money in their neighborhood).

Boston actually has plenty of 2-3 bedroom units. They are just all occupied by 3-4 twenty something roommates who cannot find anything adequate to live in themselves. This kind of development is needed.

Do They Spend Money In The Neighborhood?

They spend money on Amazon, yes. But since millennials took over my immediate neighborhood over the last 4-5 years, they are all over the sidewalks but rarely - if ever - spotted patronizing any of the 'old neighborhood' businesses (ie groceries, laundromats, small services - predominately ethnic owned.) Once a $45 prix fixe menu hipster restaurant restaurant with $12 cocktails moved in on the next block, then they could seen actually patronizing one of their neighbors.

I think was the point. Not personal tastes.

Young people don't buy stuff locally. They buy services and consumables. They buy coffees and drinks and dinners and breakfasts. They buy organic groceries and hit the packie too. They buy dry cleaning. They eat at ethnic restaurants but might not buy at ethnic grocery stores. They buy Snapples and energy drinks at the Tedeschis rather than scratch offs and ciggies. And they do it all on a credit or debit card or Apple Pay rather than with cash.

Boston needs to increase housing at about 1% per year to keep up with demand. That's about 2500-3000 units annually. The big problem is we built almost nothing from 2008-2012. Still playing catch up and actually getting close. Places like NY have already overbuilt, especially on the high end. We are getting close to that and may see a pullback in lux apts and condos.

Given that young people (a) are procreating later, and (b) creating fewer babies, the relative demand for housing for singles and child-free pairs is increasing -- and those kinds of people often prefer denser areas anyway. So build more car-free units in Boston, and you get all kinds of things: more political support for transit, less increase in sprawl and traffic in the 'burbs, economic growth, downward pressure to stabilize housing, and effectively you get an increased supply of family units in Boston because some units currently occupied by roommates are vacated.

It's a big win for the City of Boston.

Will it's residents and

Will it's residents and restaurant patrons speak up about the zombies outside dropping needles and empty nip bottles all over the ground? Better put a lock on that restaurant bathroom door. I find it incredible that residents of a lot of the market units newly developed around North Station act oblivious to it all when they step out their door .

At least the architecture of

At least the architecture of this new building doesn't look like every other new apartment building in the Boston area. You know what I'm talking about.