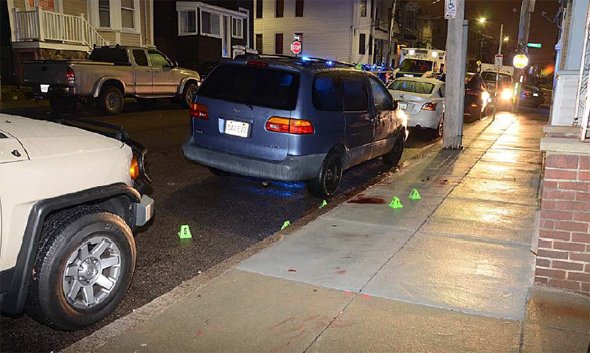 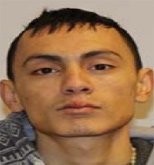 One of three MS-13 members who hacked a 16-year-old to death with long knives on Falcon Street - as a fourth member fired a gun at him repeatedly - got a 35-year federal prison sentence today.

Jairo "Seco" Perez, 27, faces deportation to his native El Salvador at the end of his sentence for helping to kill Cristofer Perez de la Cruz of Chelsea on Jan. 10, 2016, the US Attorney's office in Boston reports.

Perez and four other members of the MS-13 Trece Loco Salvatrucha "clique" met Perez de La Cruz, whom they suspected of being a member of the rival 18th Street Gang and whom they lured to his death by pretending to be a girl interested in him on Facebook, authorities say.

Authorities add that Perez hoped to get a gang promotion by helping to kill the teen.

A wired informant captured Perez talking about the murder afterwards, according to a sentencing memorandum filed by federal prosecutors.

Among other things, when asked how he felt after the murder, Perez stated, "I am at peace with what I have done, doggie," and "I fucking slept well!" ... In a sickening exchange, Perez also talked about how he and his fellow gang members had left the victim in such a condition that the police had trouble identifying the victim because the group had disfigured the victim’s face and chopped off his hand.

Five days after the murder, Perez and fellow gang member gathered up all the weapons they'd used and murderers' clothing that night and then drove them to Deer Island, where they buried them, the memorandum says.

Perez, who pleaded guilty in May, was sentenced in US District Court in Boston two days after another MS-13 member was sentenced to 27 1/2 years in prison for repeatedly shooting Perez de la Cruz while he was being hacked to death.

In August, one of the other three gang members with a machete was sentenced to 35 years.

A jury found another one of the knife murderers guilty in June; he is scheduled for sentencing later this month.

Last month, a gang member who was supposed to join in the murder but overslept got 18 years.

Perez was one of 61 alleged MS-13 members arrested in raids in 2016. Most have since either pleaded or been found guilty.

I'm pretty damn liberal, but it blows my mind when I hear "activists" saying these gangs are being used as a pretext by law enforcement to persecute immigrants. This is just one of several East Boston teens killed in the last couple years.

I have not heard anyone make this assertion.

Care to link to what you are talking about?

In one of the other articles on the prosecution of this scum, I mention an article that appeared on the front page of the Globe last year downplaying MS-13, even in Boston. Some else provided a link to the article. I'm too lazy to look the Globe article or the uhub comment up, but it's out there. It's a real assertion. Thankfully, Adam has put such partisanship aside in his coverage of the verdicts and/or sentences, and I am grateful to him for remaining constant in his coverage.

If you wanted to spin things better, you should wait until someone comments on this scumbag's immigration status, then pounce on them because immigrants, even those here illegally, are more law abiding than the native born population (the fact that those here illegally are breaking the law by their continuing presence aside, of course.) It'll happen eventually.

John Harwood of MSNBC doesn’t think they are all that bad.

Vox defends them too.

Having to provide links to everyday observations like the sky is blue or ms 13 is bad because certain commenters can’t use google is pretty annoying.

against the point you are defending... but it’s really difficult to take anything you type seriously when your verified username is “pubic wig”

This message will self destruct in...

That is merkin, try spell

That is merkin, try spell check next time. Murkin is my last name, thanks for playing.

And I’m sure you missed this

And I’m sure you missed this in the Globe.

links posted actually amounts to a defense of MS-13, but you'd have to actually read the body of the articles to know that.

It's possible to observe that the President is overstating the threat of MS-13 for political purposes while recognizing that some of its members have committed heinous acts.

You expected these link posters to actually read what they posted and understand comments in context?

Exactly the point i"m making: nobody is defending MS 13.

It is a valid point that idiots and racist haters ARE using MS 13, homegrown as they are, to justify persecuting immigrants. That isn't pro-MS13 but anti stupidity that ignores facts.

I read the original article in print

And yes, much like the current administration appears to be using MS 13 to stir up nativist sentiments, articles like the Boston Globe article, which once again I will emphasize was on the front page and above the fold, was a way to claim that the effect of MS 13 on the community is minimal, which those of use who have been reading about the MS 13 saga here back when Trump was merely a property developer thinking about running for office know is not true.

I will also note that there have been some commenters here that have also sought to minimize the effect of MS 13. I call out Steeve for this comment.

I don't like nativism and how MS 13 is used as a cudgel, but I want to see them broken.

Beat me to it. The parent post is positing a false dichotomy. Both positions can be true. These can be dangerous street gangs populated by violent criminals and law enforcement can be taking advantage of the crisis to push policies and laws they never otherwise would have gotten away with. The old political cliché "Never waste a crisis" doesn't imply the crisis is faked.

When did a conviction for First Degree Murder stop being a life/death penalty sentence at the federal level?

The aghast Boston Globe, channel 2 and other liberal media outlets told us that no Massachusetts federal jury would ever issue a death penalty sentence, not withstanding the overwhelming state referendum votes in favor of the death penalty in years past, only to be twisted by Felon Finneran. Boston federal juries have applied the death penalty twice in recent years, both where multiple murders were confessed by the suspects.

Put them down quickly (limit the appeals) when guilt of first degree murder is clear. Send a message.

It's a plea deal

I don't know if you are familiar with the criminal justice system, but sometimes the government enters into agreements with defendants. It is mutually beneficial. The government gets something, ranging from testimony in the trial of someone else to the guarantee that the guilty plea has over a trial which could possibly result in a not-guilty verdict. The other side is that the defendant gets to avoid things like, oh, I don't know, a life sentence or the death penalty. It's win-win.

You did do the math and saw that when he gets out he'll be in his 60s, right? That's more than half his life up to that point in prison.

I don't know if you are familiar with the criminal justice system,

Let me stop you right there.

Calling them animals? Well you're one too. We all are!

Fish: Your contempt for human beings you want to dislike is as sure as the sun rising. "Put them down." How about putting down the people who caused tens of thousands of American soldiers to die in a war that was about revenge, oil, power and maintaining wealth and power for the masters of America?

35 years for hacking someone

35 years for hacking someone a minor to death? I might suggest you all leave MA fast as it is rapidly becoming unviable.

35 years is quite a long time. As someone else pointed out, he'll be in his sixties. As far as I know, the feds changed their policies. If you get 35, you do 35. Then they send him home to El Salvador.
If they can keep it up, they can pretty much get rid of MS-13. Yes, folks, I understand the concept of 'sanctuary cities'.
I also understand that the FBI will protect witnesses from these criminals.

He was caught by an informant wearing a wire. He (or she) might very well be an illegal immigrant, but they will get witness protection, undoubtedly.

Our lax policies on punishing offenders must be the reason the state has the lowest rate of gun violence in the nation, and ranks in the bottom third for every category of violent crime, despite housing the largest city in New England. You'd best scurry off somewhere safe, before one of those scary immigrants comes for you.

Clearly we don't have enough violence in Massachusetts to satisfy the rest of the nation.

Blatantly false statistic. Massachusetts is nowhere near the best for any of the categories here, except "murder and non-negligent manslaughter rate," which isn't specifically gun murders. Massachusetts is terrible on the actual gun murders, right in the middle at #23.

Click the headers to sort the states; New Hampshire beats Massachusetts on every single one of these statistics.

There is no parole here. By the time this boy leaves prison - if he doesn't die in it - he will have missed the part of his life where his physical and mental powers (such as they are) are at their peak. He will be disconnected from the majority of the good and bad of open society. Then he will leave to El Salvador. Whether he survives that change is left to reading his tea leaves.

Unfortunately the prisons are weighed down with internal corruption of power, dominance, and continued gang activity, that the chances of salvation of the boy (salvation for a better life in this world, the next will take care of itself) are much lower.

Questions remain: What conditions creates humanoid monsters? Some are psychopathic and so are born that way. For them moral redemption is impossible. If they can not be directed toward good then the chaos of our society may push them to evil.

But were all 61 members of MS-13 psychopathic? At what points could these human beings have been directed toward being human and not humanoid monsters?

If they were redirected toward good, and away from evil, then their victims would still be alive, a prison bed would not be filled, horrific pain would be avoided.

The institutions that can redirect are either failing or are can not do their work. Many of the religious institutions are insular and living in fantasies that ignore reality. Gov't agencies are perpetually told to cut back because as citizenry, we are addicted to the phrase, "No more taxes." Meanwhile the wealthiest continue to accumulate more wealth and either turn hoard the wealth or turn it into power to allow themselves to live in 40 story towers literally above the fray.

Just as there has always been sufficient food to feed the world, there is sufficient cash to help the helpless, control the psychopaths, provide homes for all, good medical care - physical and mental - to all. But just as the food problem has always been about distribution, the wealth problem is about distribution. Too much in the hands of too few.

Our consumer market has done a fantastic job of extending adolescence well into one's 20s. But the correction is recognized in spite of its pedantry.