Hood Park project in Charlestown reimagined again to add more housing, some in a tower 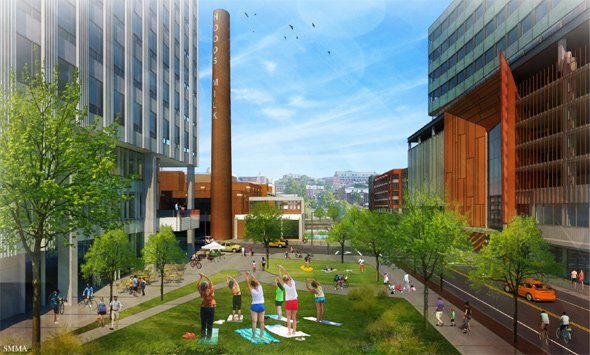 With Sullivan Square and Rutherford Avenue set to become actually usable by pedestrians, the owners of the 20-acre Hood Park parcel have filed another revision for their project with the city that calls for more housing - some at the top of a 290-foot-high tower - as well as more office space.

Hood had already won approval to amend its original plans for an office and R&D park to add 177 apartments now under construction (as the Harvey, in honor of Harvey Perley Hood, who started H.P. Hood in Charlestown in 1846).

In a request recently filed with the BPDA to change its overall "master plan," the company now says it wants to add up to 200 additional residential units, as part of a re-imaging brought about by all the money the city and the owner of the impending Encore Boston Harbor casino will pump into changing the Sullivan Square doughnut of death into an urban street grid and the Rutherford Avenue highway into a slimmed-down neighborhood boulevard.

With over $325 million in infrastructure improvements to the vehicular systems in this corridor now planned, the time has arrived for Hood Park to evolve and become an integral part of the Charlestown neighborhood. By bringing this historic resource into the 21st Century through the creation of a true mixed-use live, work, play environment, the Proponent expects to enhance the neighborhood and to create jobs and the opportunities for new employment in emerging technology companies that will grow and enliven the Park. The Proposed Project will help to integrate the eastern and western sides of Rutherford into a single Charlestown community and add the kind of active business and residential uses that other neighborhoods in the City enjoy and that Charlestown residents also deserve.

In addition to housing, the latest plans call for a one-acre park, several smaller open spaces and a two-story building set aside specifically for pop-ups retail shops.

Gone are plans for a 4,000-seat entertainment venue, but added is a total increase of building square footage on the site from roughly 1.1 million to 1.7 million. The plans also call for a 130-room hotel, as well as a total of 1,765 parking spaces. This would include the 990 spaces in a garage the BPDA approved this past March.

Hood says that all of the new roads in the complex will feature dedicated bike lanes, intended to tie into a bike path proposed for the rebuilt Rutherford Avenue. The company says it will pay to install and maintain a BlueBikes rental station.

The company estimates it will take 15 years to fully transform what is still mostly a series of parking lots into the new 11-building, mixed-use neighborhood. It adds it will work out specifics on everything from the exact number of residential units to the make up of the proposed park after further meetings with residents and city officials.

From the company filing: 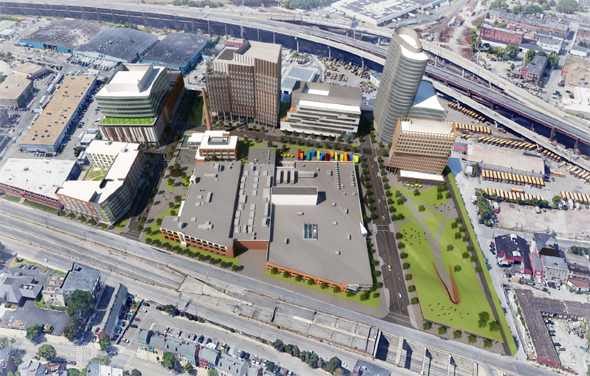 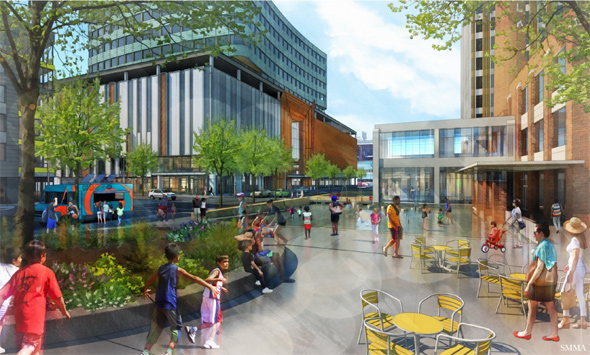 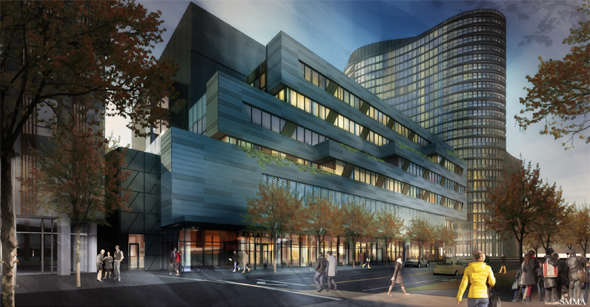 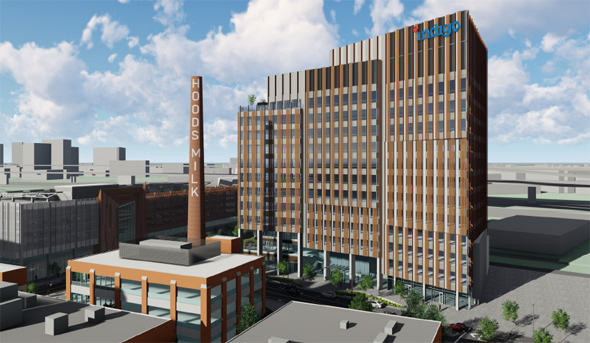 The potential view from Spice Street: 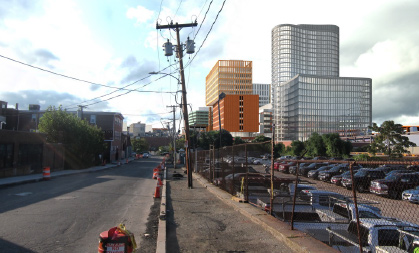 The O-Line is crap. The Donut is worsening. They propose this?

Look I'm all for new development in my neighborhood. But the current traffic around and on the Orange Line is already strained. The Sullivan Donut improvements post-Wynn will increase traffic, not decrease it. This team is banking on old fantasy grid plans for Charlestown.

Instead of bitching at the developers

You could demand better transit.

Tell the developers you want

Tell the developers you want them to pitch in for the transit! Bike lanes, great. How about getting the number of parking spaces down and planning better bus and walking connections, too?

You can ask. But you won't get anything

Tepid improvements have been made ahead of Wynn Encore. The state has over-committed transportation money. Unless there's a major shift in Baker's second term, don't expect major improvements until 2040.

In the top rendering, is that a sculpture of yoga people or are those just GIGANTIC yoga people?

Hollywood is all sequels and remakes these days, they’re pitching Attack of the 50 Foot Yoga Women.

Again with the bike salmon

I see more wrong way cars these days than bikes.

Is The Rutherford Ave. Rehab a Certainty?

Obviously, a complete refurb of Sullivan Sqaure and Rutherford Ave. is integral to this plan. But is any of that going to actually going to happen in the next 15 years? Right down the street, the complete N. Washington Street Bridge replacement is already scheduled. So how would that integrate with major Rutherford Ave. improvements? Has Encore committed to anything specific yet besides 'improvements' around Sullivan and dollar figures? This is some serious infrastructure work here . .

Boston's and MassDOT's ambitions for the area do not align, especially since the Wynn announcement

They need to rethink their streets

There's no need for them to be full-sized streets - they function almost entirely as driveways. They should be conceptualized and designed as such, and if they can't be, the bike lanes should be elevated and protected. Build it right the first time, there's no reason to not do that. It's the same issue in Assembly Square - there's no need for most of the internal streets to exist other than to separate buildings.

The winding path on superstack street is also obnoxious. People have to get places and don't have time for your imposed no-reason detours.

Boston music crisis: Another large rehearsal space set to close, this time in Charlestown, councilor says
More loud banging reported, but probably not F15s this time
Man arrested for taking a snooze in his car on an I-93 onramp in Sullivan Square - and for being drunk and having a loaded gun - DA says
For first time in centuries, native Americans use traditional fire technique to create canoe along the harbor, then paddle it into the water
Sewage flowed into Boston Harbor this morning
Repair work on unfinished North Washington Street Bridge has started; state hopes to open span to vehicles in December, 2023