Redcoats arrive to restore order in the name of the king, huzzah! 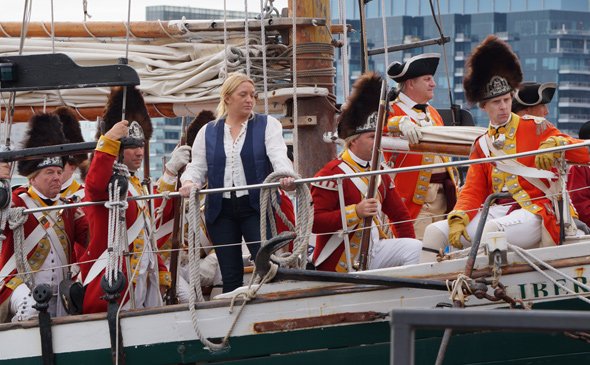 Shortly after 9 a.m., more than 100 of His Majesty's troops disembarked from rowboats and one sailing ship at Long Wharf to assert control over the increasingly agitated city of Boston - exactly 250 years after the same thing happened in colonial days. 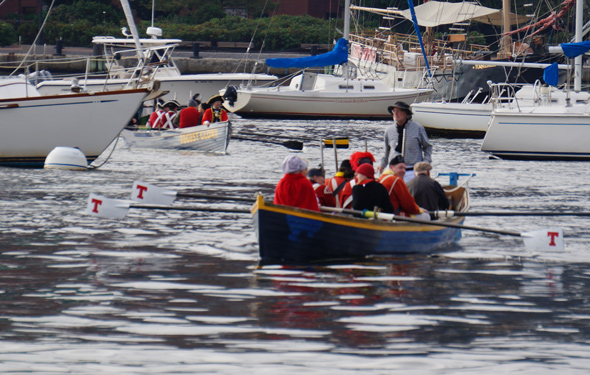 Of course, some allowances had to be made for our more modern times: The lobsterbacks got onto one of the floating ferry docks, then had to walk up and down a gangplank before they could assemble at the end of Long Wharf: 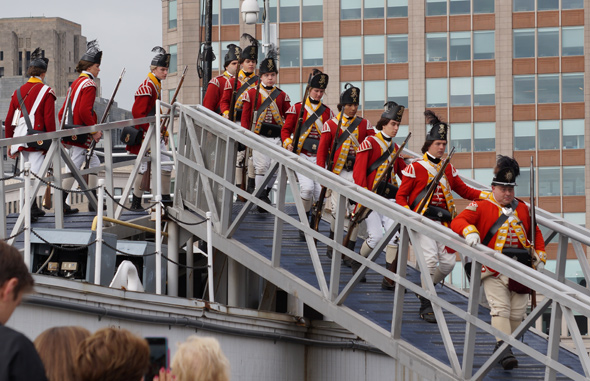 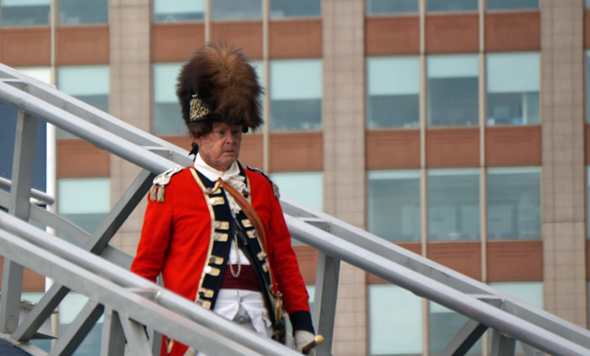 They were met by wary residents of the town: 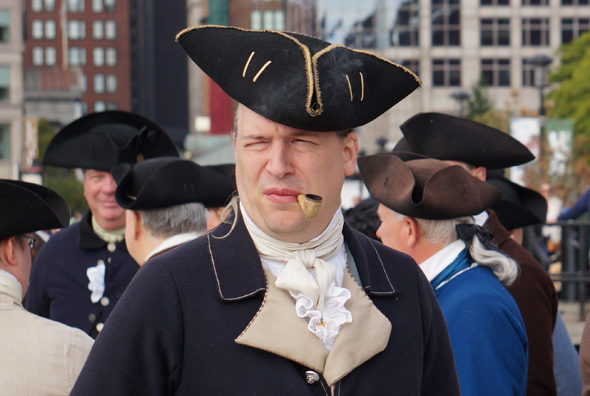 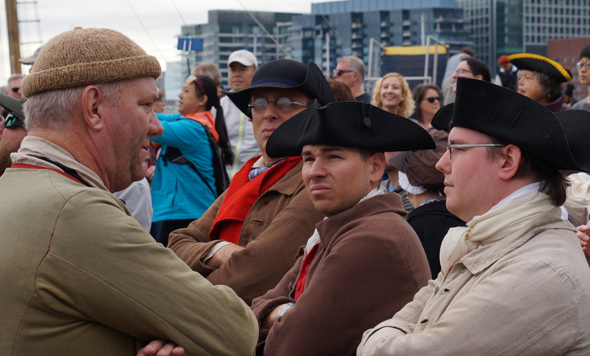 Not all the locals were upset: 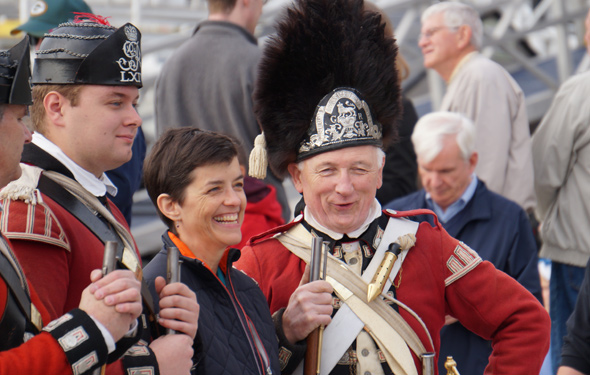 In addition to redcoats, there was at least one redjacket: 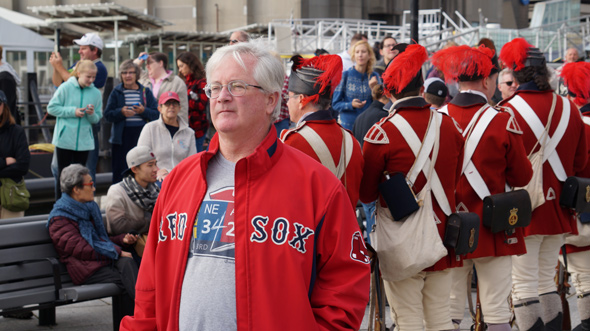 After they marched to the end of the wharf, they fell into formation for inspection: 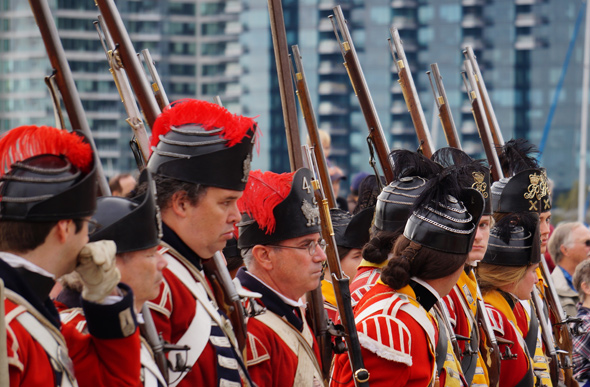 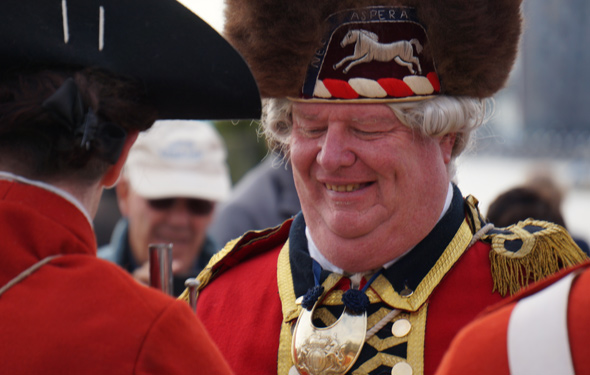 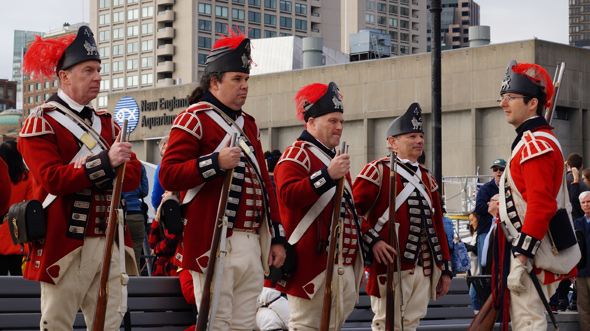 After the last of the troops had assembled, their commander addressed them in the name of King George, which brought a hearty "Huzzah!"

"We have traveled thousands of miles from home," he told them. "This is England!" They huzzahed. He mentioned George again, which brought forth a triple huzzah. And then the musicians began to play and it was off on a march to the Common, where they will set up an encampment as they ensure calm through the colony. 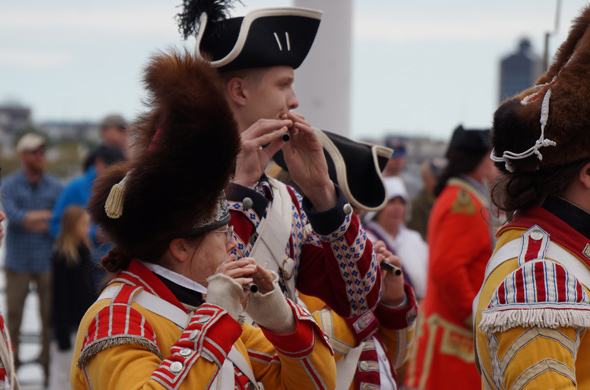 I figured they were just Brexiting and needed someplace to go.

Their coats certainly are

Let Them Go To Adams Corner

The march might go a little different for the Butcher's Apron crowd, perhaps there may be a little more excitement a la the retreat from Lexington and Concord.

"I'm up on the hills playing little boy soldiers
Reconnaissance duty up at 5:30
Shoot shoot shoot and kill the natives
You're one of us and we love you for that
Think of honor queen and country
You're a blessed son of the British empire
Gods on our side and so is Washington
Come out on the hills with the little boy soldiers
Come on outside I'll sing you a lullaby
Or tell a tale of how goodness prevailed
We ruled the world we killed and robbed
The fucking lot but we don't feel bad
It was done beneath the flag of democracy" - Paul Weller

Colonists don't really have much going for them either.

And I don't think even their king can save them if their muskets aren't totally fake or aren't made before 1899.

How is it to be so angry all the time?

Does that really work for you?

I'm not the one with anger issues it would seem.

Say something angry, racist, bigoted, stupid, lying, etc, and when questioned or criticized about it. ...... say it's a joke! Haha!

Oh I forgot the narrative

Us conservatives are the humorless angry nutjobs while it's the leftists who hold the monopoly on comedy.

I don't know how I could have forgotten.

Us conservatives are the humorless angry nutjobs

Yup. You certainly are. The only laughs you get are from victimizing other people.

lib who not but a week ago was screaming "rapist!" at the top of his lungs for no reason other than he was told to.

I don't know what's worse: the idea that you believe half the shit you say you do, or that you don't but repeat it anyway.

Like I said: you're at the fire-and-brimstone phase of your religion. Maybe you'll get to the enlightenment, maybe you won't. Last couple of weeks a lot of people did. That gives me hope. Even for probable sock puppets such as yourself.

This whole “democracy” thing doesn’t seem to be working out so well lately. I’m just saying, have we TRIED monarchy? Maybe we just need to hear the redcoats out.

At the risk of starting a Monty Python cascade

...I have to say I'm rather liking the idea of an autonomous collective.

Huzzah, loyal subjects! Consul General @harryvx was delighted to welcome Her Majesty’s troops back to Boston 250 years after they landed in 1768.#BostonOccupied starts now, so come see them on Boston Common while we raise the Union Flag. Good luck getting it down this time. pic.twitter.com/lxPnbtdpsC

BY ORDER OF HER MAJESTY’S CONSUL GENERAL:

With #BostonOccupied underway, the throwing of tea into Boston Harbour is hereby prohibited. Violators shall be detained by Her Majesty’s soldiers and lectured *very* sternly against food waste and littering.

One if by land

Two if by Sea
Three never take the 'T'

Bright moon over Boston
So a Faneuil Hall musician is performing a John Legend song when John Legend walks up
Get some free coffee from the T
Oh for the love of, is that really a turkey, here, right in Downtown Crossing?
Mask hater tries to rip mask off woman in Downtown Crossing
Boston cop who boasted of hitting protesters with his car gets eight-day suspension