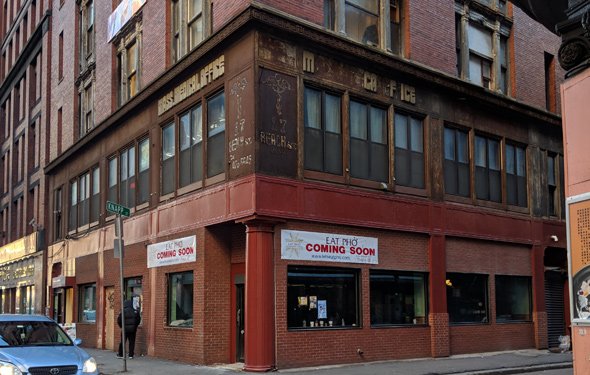 Where Pho Hoa used to be.

Pho Hoa, the Beach Street pho place that closed in October, could re-open with a new name under new ownership as soon as both renovations and some unusual legal maneuverings are finished.

At issue is the status of the restaurant's beer and wine license, Daniel Brianski, attorney for the new owners, told the Boston Licensing Board this morning.

Pho Hoa's original owners sold the restaurant to new owners about 18 months ago, and the new owners changed the name to Pho Mai. But for some reason, possibly just some miscommunication, neither the original owners nor their lawyer actually handed over the beer and wine license to the Pho Mai owners, who in turn never filed paperwork with the city to acquire rights to the license, which means, technically, they should not have been selling any beer and wine with their pho.

More recently, the building's landlords, Tran Le and Vinh Le, reached an agreement with the new owners to buy the restaurant themselves. But when they asked for the beer and wine license, the second set of owners didn't have it to hand over, he said at a hearing this morning.

Although Brianski represents the landlords - who have organized a new company, Eat Pho, LLC, to own and operate the restaurant - he appeared before the board representing the Pho Hoa owners, as a favor, he said, to help them out of the mess that was not of their making.

Brianski said that now, Pho Hoa technically has to transfer its beer and wine license to the intermediate owners, Pho Mai, which will require one licensing hearing and then Pho Mai will request the board's approval at a second hearing to transfer the license to Eat Pho.

But, he continued, that's not the end of the issue. He showed the board a wad of legal documents he said represented all the paperwork needed to start the process - except for a "certificate of compliance" from the state Department of Unemployment Assistance related to payments to the state unemployment-compensation fund. He said he's having a devil of a time getting the certificate - without which the licensing board cannot legally begin the license-transfer process. He said he could never get through to the department by phone, so he went down in person, only to find nobody there knew how to help him. He eventually managed to find a department lawyer, who said he could get a copy of the certificate through a department Web site, but that would require a restaurant password, which he didn't have, so now he is trying to get that from the former owners' accountant, who does.

Board members expressed sympathy and said they would do what they can to expedite the process.

As a long-time customer I was weirded out by the name change and then disappointed when Pho Mai closed abruptly. I hope that the new owners will make an effort to bring back some of the same staff and make things right. Since Xinh Xinh closed, there's been a serious lack of choice in Vietnamese food, approaching crisis level.

Come on down to Fields Corner. We have unlimited choices of Vietnamese food.

Things were going downhill before that. There used to be at least half a dozen great small Vietnamese places in Chinatown. Most seem to have gotten pushed out by development. That space is the old Pho Pasteur, home of many reasons to keep on living in a miserable Boston winter. Alas...

A plethora of choices await you a few stops down the Red Line.

I miss when xinh xinh was

I miss when xinh xinh was still around

What are places to check out around Chinatown?

What are places to check out around Chinatown?... in addition to the new Chinatown Library https://www.bpl.org/chinatown-project/

in addition to the new Chinatown Library