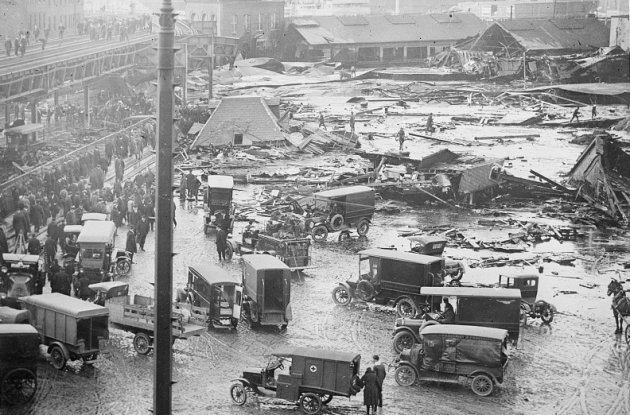 Flood aftermath. See it larger. From the Library of Congress collection.

Stephen Puleo, who literally wrote the book about the 1919 Great Molasses Flood (Dark Tide), will give a talk on the deadly, brown, gooey tsunami at the BPL on Jan. 15 - 100 years to the day after a shoddy, 50-foot-tall molasses tank on Commercial Street in the North End exploded, sending a deep river of warm molasses along the waterfront at 35 m.p.h., killing 21 people and several horses, demolishing a fire house and warping the elevated tracks that then ran above the street.

Puleo speaks at 6 p.m. in the Rabb Lecture Hall at the BPL main library in Copley Square.

If you miss Puleo there, you can see him in a panel discussion on Jan. 31 at the Old South Meeting House, discussing "The Great Molasses Flood Revisited: Misremembered Molasses:"

The Great Molasses Flood of 1919, when remembered, is often interpreted in a dismissive, comical manner. How does this case compare with other incidences of historical events that are interpreted or "curated" at the expense of accuracy and respect for human experience? How can we bring complexity back to events that have long been relegated to the realm of local folklore? Local scholars will discuss the question of misunderstood history by looking at the Great Molasses Flood, the fight for women's suffrage and Leif Erickson.

This session begins at 6 p.m.; free registration is required.

On the 100th year anniversary of the Boston Molasses Disaster,
join us at the Model Cafe for a night of comedy, music, poetry, photography, and molasses filled baked goods.

Let me guess, and on a hot

As slow as molasses in January?

Estimated speed was 35 miles per hour.

One of the reasons the rust bucket of a tank gave way was because it was pretty full, the rivets were giving way and it was a relatively warm day (in the 40s, I think), and it all expanded and KABLOOIE.

Seemed like it was on wobbly legs when I was living in Hanoville, around 1971. (As if people even know where Hanoville is.)

I lived in Allston for a few years and remember an old man telling me about Hanoville - i think he said that is just what they called Hano street, haha

Seem to be on standby for body recovery..

How else do you commemorate a disaster

than with a party? Sheesh!

Man who bought old Tunnel Administration building in the North End wants to turn it into that rarest of North End things: A single-family house
Probably not part of a feast procession
St. Agrippina made her way down Hanover Street tonight
Big-ass skyscraper could be in the works for area near North Washington Street Bridge
Congolese brunch place opens in the North End
Living Room to become daycare in the North End