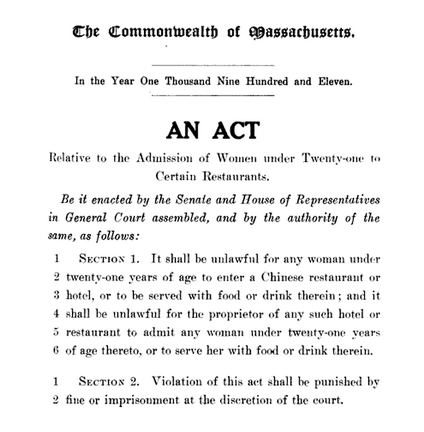 It was, looking back, not one of the prouder moments in Massachusetts history: In 1910, the state House of Representatives approved a bill to bar women and girls under 21 from Chinese restaurants, unless accompanied by an older, non-Chinese man, to curb the alleged opium-powered menace to white womanhood posed by crafty "Orientals."

The bill - sponsored by the state representative whose district included Boston's Chinatown - was approved twice by the House. Before it could be voted on for a final, third time and go to the Senate, though, the state attorney general ruled the measure would violate the Constitutional rights of Chinese business owners. After that, the House seemed to come to its senses and rejected the measure. But then, the next year, a South Boston state representative re-filed the bill.

At its heart, the bill was a classic example of fear of immigrants. Back in the early 1900s, the Chinese had the role now reserved for Central Americans and Muslims - "Chinamen" were collectively accused of being simultaneously cunning and brutish, responsible for all sorts of horrible crimes, with the worst, of course, reserved for virginal white women who, unlike white men, simply could not resist temptation.

The bill was also part of an attempt in the early 20th century to contain one of Boston's newest immigrant communities, which kept growing despite the best efforts of the federal government: By the turn of the 20th century, Boston's Chinatown was pretty well established, in basically the same area it occupies today, and smaller Chinese communities had sprung up in other Massachusetts cities.

Not all whites feared the Chinese and many began flocking to Chinatown. Some were missionaries trying to convert the new residents to Christianity. But others simply liked the chop suey and other foods at the restaurants that had opened in the neighborhood.

State Rep. John L. Donovan, of Boston's 7th district, which included South Cove and Chinatown, though, would have none of it. He charged that behind the colorful restaurant facades lay opium dens, where wily Chinese men were using free food as a gateway drug to harder substances and ruin for innocent young white women.

In a 1910 article in the Boston Post, Donovan detailed what he claimed was going on - taking some time away from his work as a member of a state commission charged with battling gypsy moths:

It is really a study to watch how the Chinamen trap these girls. The cafes are brilliantly lighted. On the outside over the door there usually swings an electric light sign which reads 'American and Chinese Restaurant.' A girl or perhaps two or more walking home from work read this sign. They are young and romantic and as if by magnetism they are drawn toward the door. The sound of music reaches their ears and the first they know they have entered one of the parlors of vice in the form of a Chinese restaurant.

But the girls are pretty and attractive. Much attention is shown them. Chinamen seem to view with each other as to which one shall have the pleasure of waiting upon the newcomers. The girls dine perhaps on chop suey and tea. The viands seem to them very palatable. Indeed, as soon as they enter, a special order is sent in to make what they send for extra fine.

And then, he continued, the restaurant owner would rip up their bill, inviting them to return for dinner the next night - at which they would get an even grander meal, again for free, Donovan wrote. This would go on for a week or so, the restaurant owner and waiters would offer the young women cigarettes and then, as they swooned from the effects of the smoke, would be offered a tour or the rooms upstairs. After that, of course, they would be offered the opium that was the start of their swift descent into addiction and debauchery, leaving them ruined husks that no man would want, he concluded.

Donovan's article in the Post came a few months after the Post had an article in which the Boston Police officer who patrolled Chinatown said white women, in particular the missionaries, had nothing to worry about, that he had seen no problems:

In my four years' experience in this quarter, I have never had a single complaint made by a woman against the Chinese. Such a record shows more clearly than words whether Chinamen are guilty of the charge of luring white women from their homes.

But the article didn't stop there: The Post then continued with a much longer interview with some unidentified "official" who told a far seamier story, more akin to Donovan's, in which innocent white women simply didn't have the strength of men to fight off the subtle charms of Chinatown:

In every tea shop and bowered garden there exists the suggestion of mystery, which the casual eye cannot detect.

The Chinaman keeps his secrets largely to himself. These secrets seldom come to light, save during one of the death clashes, in which the rival Chinese societies for the time being cast all discretion to the winds and strike to murder.

There are today white women who live among the Chinamen in Boston. Many of these girls have gradually drifted downward until they have fallen into the clutches of the Orientals. After that, there can be no possible hope for them by any means.

And so Donovan introduced his bill, which the press dubbed "the Yellow Peril bill."

Not all legislators agreed with him. State Rep. Freeman O. Emerson, also of Boston, called the tales nonsense and the proposed law unconstitutional. After he left office, he even took representatives on tours of Chinatown to convince them the restaurants were no worse than any other restaurants.

But in March, 1910, the house twice voted in favor of Donovan's bill. After Massachusetts Attorney General Dana Malone issued an opinion that the law would violate the 14th Amendment, which calls for equal rights for all in the US, the House then rejected Donovan's proposal.

In 1911, state Rep. William L.V. Newton of South Boston re-introduced the bill. This time, the House asked the Supreme Judicial Court for its opinion. Like Malone, the state's highest court cited the 14th Amendment in ruling that the measure would unconstitutionally deprive the owners of Chinese restaurants and hotels of their right to conduct business.

There is no doubt of the right and duty of the Legislature to enact laws for the promotion of public order, decency and morality. But when such legislation interferes with the exercise of personal rights, it must be directed to the prevention of real evils, in the interest of morality. This proposed legislation does not assume to forbid anything that is necessarily evil in itself, or to deal directly with any offense against order, decency or morality. There are good hotels and bad hotels, good restaurants and bad restaurants, kept by men of the Caucasian race; and there are others of both kinds kept by men of other races. This legislation does not refer to the character or condition of the hotel or restaurant that a young woman may not enter, but refers only to the nationality of the person who conducts it. The enactment of such legislation is not a proper exercise of the police power. It has no direct relation to the evil to be remedied. It forbids the entry of a young woman into the hotel or restaurant of a Chinese proprietor, even if it is a model of orderly and moral management, and it permits the entry of young women into a hotel or restaurant kept by an American, when it is known to be maintained in part for the promotion of immoral or criminal practices. The classification of hotels and restaurants into those that are open to young women and those that are closed to young women is not founded upon a difference that has any just or proper relation to the professed purpose of the classification. The only classification is into hotels and restaurants kept by Chinese and those kept by persons of any other nationality. ...

The fact that a man is white, or black, or yellow is not a just and constitutional ground for making certain conduct a crime in him, when it is treated as permissible and innocent in a person of a different color.

In 1912, Charles Shue, a prominent Chinatown merchant, the first Chinese-American justice of the peace in the US and one of Chinatown's few registered voters, ran as a Republican against Donovan - back in the days when Republicans could still get elected in Boston. Shue was the first Chinese-American candidate for elected office in the country, but lost to Donovan, 825-240.

H/t Richard Auffrey for finding this bit history in the first place. Auffrey has far more about the history of Boston's Chinatown and the repeated efforts to try to snuff out its restaurants.

is that while it's great and all that it was found to be unconstitutional, the grounds for that is the business owner's freedom, while absolutely nothing is ever said about an adult woman's freedom to patronize whatever establishment she chooses.

Yes, the sexism of the time was also amazing

But then, it often went hand in hand with the racism.

The proposed law applied to women under 21, who were likely not considered fully adult in 1910. (And still aren't today for some purposes, such as laws regarding alcohol, tobacco, and marijuana.)

Notice it only applied to young women, not young men. At least today's laws apply to all people of a certain age, regardless of gender.

If only the city council had

If only the city council had let Donovan build that wall...

The Chinese built a really big one

Didn't work keeping them in obviously. And if you look at the history, didn't do too well keeping people out either.

Those who ignore history are destined to repeat it...

Thanks for the write up.

The stories these reps were scribing reads like poorly written fanfic. These guys were having wet dreams thinking of these imaginary helpless young (no doubt attractive and impressionable) women and the supremely evil, crafty foreigners.

I wonder if Uhub in 2105 will be running stories about how idiot legislators were proposing actions in the late 20-teens to stop the "rapists and murders" that were supposedly streaming across the southern border.

Nah, there will be historical

Nah, there will be historical articles commenting on the scourge of bicycles, scooters, and the unstoppable turkey menace.

Is there any other kind, really?

it sometimes works out

for this extended story. Very interesting, sad and maddening.

Who's next in the game of bigot roulette?

1910-11 at the height of the Chinese Exclusion Act of 1882 which barred most Chinese women form entering the USA, amidst widespread miscegenation laws making interracial marriage illegal until 1967 Loving vs. VA. Geez. Some folks were very afraid of Chinese men...