The Zoning Board of Appeal today rejected a proposal by developer Larry Cristafori to build a four-story, five-unit building on what is now a vacant lot at 223 Northampton St., near Tremont Street in the South End.

The vote means Cristafori, who bought the property in 2015, has to wait at least a year before resubmitting plans to build on the lot. ZBA Chairwoman Christine Araujo said any future plans would have to be different than the ones rejected today.

Cristafori's attorney, Dennis Quilty, noted that the board had approved plans for a building on the site back in 1987. And he said Cristafori reduced his original proposal from five to four stories to create a building he said would fit right in with the rest of the buildings on the street and Chester Square area.

But the mayor's office and nearby residents lined up to oppose the proposal.

Faisa Sharif, of the Mayor's Office of Neighborhood Services, said her office decided to oppose the project when Cristafori rejected a request to hold another meeting with residents to try to work out differences.

Residents said the building would still be too larger for the area and that they were affronted by the developer's proposal to take down some trees and to use front and rear decks to meet the zoning requirement for "open space."

Quilty, however, said the front decks were taken out at the residents request. He said Cristafori was willing to meet with the Chester Square neighborhood association again but that he was told "not to waste our time," at which point it made more sense to go to the zoning board.

And here you have our housing

And here you have our housing shortage in a nutshell. Project rejected for not holding another meeting with neighbors who quite openly aren't negotiating in good faith anyway.

Residents said [...] they were affronted by the developer's proposal to take down some trees

Uh, do y'all mean these trees that are taking up the space where the building would go?

I'm confused as to what the problem is here. This lot has been vacant for over 30 years? The neighbors essentially refused to meet with the property owner?

The problem is that 223 Northampton St doesn't exist. We're actually talking about the back of 527 Mass Ave. It's the first parcel that extends all the way from Mass Ave to Northampton when the block narrows at Chester square. So while I typically agree that filling empty blocks with housing is a good idea, this is really a question of how small of a block can we tolerate and who gets to chop them up.

It's been just a Mass Ave building with a backyard since at least 1883. It's N.B. and L.J. Bryant's parcel in this map: 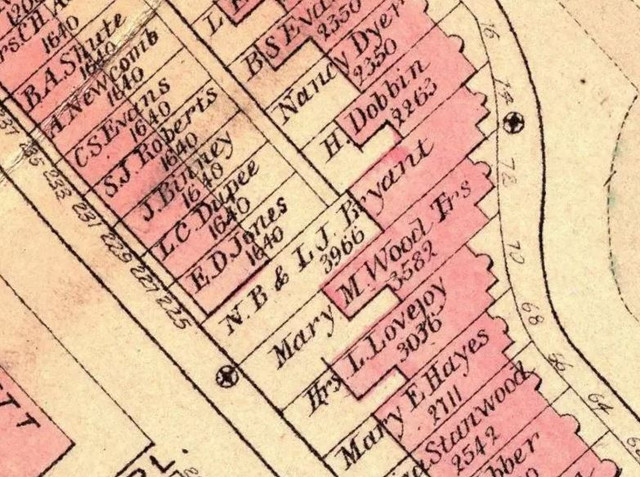 Proposal was to subdivide

You're right there is no current 223 Northampton St. The proposal was to subdivide and create a new parcel. Problem solved.

Look to the left, every other building I can see is functionally a "backyard" of a building on Mass Ave, whether the lot lines say so or not. If this building were to have been approved, it would have been a continuation of what's going on up and down the street.

Perhaps given housing costs it’s time to change. It looks like the equivalent lot across the street has a larger building that stretches back to the side street. And on the other end of the block it’s split with a building on Northampton St.

I like trees too but we’re not going to fix this with NIMBY mindset.

That does explain what I'm seeing on street view. But on satellite view it is a huge back yard, and at the other end of Chester Sq, the same scenario exists, and there IS a building on Northampton.

Does he down the Mass ave building and wants a building in the back yard? Or was the Northampton lot sold as it's own property, and therefore should allow something there?

As with everything, this feels like a zoning question. It is similar to other buildings on Northampton St and yet this would have even less space between the new building and the old. Abutters will always fight to preserve an empty wooded lot vs. looking at a brick wall but if he's asking to put in a building in a space which isn't zoned for it, then that's on him.