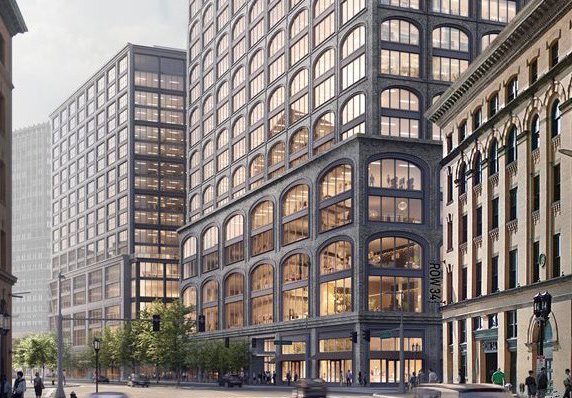 The developer of the massive Seaport Square project is seeking BPDA approval to shift an as-yet unbuilt building on Congress Street from residential to office and R&D space and to replace many of the large luxury units it had originally planned on other parcels with "smaller, lower-priced units."

Seaport Square Development says the proposed changes will not change the overall footprint of the 23.5-acre development, but reflect shifts in who's moving into Boston in general and the sort of housing needed by people who will both live and work along the South Boston waterfront.

Most immediately, the developer wants to change the use of a building on Congress Street at West Service Road that was originally approved as a residential building:

Given the opportunity to further contribute to the robust economic development underway in the district and also provide an opportunity for innovation and life sciences companies that already call the Seaport home room to grow in close proximity to their other facilities, the Proponent expects to secure commitments from one or more major office and/or research and development tenants for Block N. The current preliminary design of the Block N building includes approximately 38,000 square feet of Retail/Entertainment/Restaurant/Service Uses and approximately 384,000 square feet of office and/or research and development uses.

The developer adds that, overall, it remains on track to build a total of 3,200 residential units in the development - with about 2,000 already built.

The
residential units originally contemplated for Block N will be constructed on other Blocks, and the number of units project-wide will be maintained at approximately 3,200, in part by shifting the mix of unit types to include more smaller, lower-priced units and fewer large luxury units. This shift also reflects the need for a greater density of more affordable homes city-wide, and will better serve the employment base in the Seaport District.

Seaport Square adds that the shift of the building's upper floors to office and R&D space will mean an extra $3.6 million in housing and job-training linkage funds to the city over what the development was already expected to provide.

In addition to the changes in the Congress Street building, the developer says it will slightly shrink the total amount of space devoted to retail, entertainment and restaurant use from 1.12 million to 1 million square feet - with the changed space moved to residential and office uses.

The "notice of project change" also discusses the design of the Congress Street building:

The design of the proposed Block N building is intended to be highly contextual and very respectful of its location adjacent to (though outside of) the Fort Point Channel Landmark District. To this end, the building is proposed with a richly textured brick masonry façade and brick arch-top windows that present a contemporary interpretation of the area's industrial heritage and tradition of craftsmanship in the application of brick masonry. The proposed Block N building would also create a modestly-scaled (4- to 5- story) streetwall along both Summer and Congress Streets, to help create a continuous and human-scaled pedestrian experience along both of these important pedestrian routes.

It is the Proponent's hope that the proposed Block N building design helps to create a seamless pedestrian and visual transition between the historic Fort Point Channel Landmark District and the Seaport Square Project along both Summer and Congress Streets. The building has been designed to bring the scale, texture, and authenticity of materials east from Fort Point and towards the Boston Convention & Exhibition Center, so that conventiongoers and other visitors will be better connected to the Fort Point Channel neighborhood's rich history and cultural context.

There must be some mistake.

There must be some mistake. The illustration appears to show a building with some actual architectural design effort. I thought that the BPDA "design review" only allowed projects using designs selected by grad students learning to use CAD.

I thought the same thing

"What is this building that looks like it wouldn't be out of place in Downtown doing in the Seaport?"

I would figure the new units would be $1,200-$1,500 per square foot based on what's happening elsewhere in the Seaport and in other new construction buildings.

So they see the writing on

So they see the writing on the wall?

This is bullshit. Boston has

This is bullshit. Boston has a massive housing shortage and the Master Plan for the Seaport called for way more residential units than have been built. The BPDA, DND, and Mayor's Office need to stop selling the city out to office space developers. Building dozens of 2-3 story houses with IDP money in the most suburban parts of the city isn't going to make up for losing SEVERAL THOUSAND of resident units in the Seaport. NO MORE OFFICE SPACE! We need more places for people to live near where they work and transit improvements before we can accept more places for people to have to commute TO work.

Greedy devopers must be losing money if they're finally deigning to build for the non-1%ers. Oh the horrors!

Dont be so sure

As the above poster put it - just because the units are smaller and cheaper doesn't mean they are actually cheaper per square foot. They're just smaller so the developer can fit more in a smaller space so they can have more leasable space for office/R+D tenants. This isn't a positive.

Housing Is The Ugly Stepchild Here

Sounds like just more office space. And sensing the 'luxury' market is saturated, simply dividing up the same residential sf into smaller, more sellable, units - but then sticking them on the ass end of the district.

West 1st between E and F?
A house boat in the shallow end of the Reserve Channel?

Boston desperately needs housing to meet a massive backlog of demand and the BPDA needs to stop allowing developers to throw plans for large amounts of housing away to build office space. Housing prices keep going up because the city is not keeping up with producing enough units for population growth. There's only so much land in the Seaport and it should be dedicated to providing housing near where people work. The traffic and MBTA already doesn't work in that neighborhood because too many people need to commute to work. The only way to fix that is to make it so that people can live close enough to those existing office buildings that they can walk to work.

Also you can't a residential neighborhood without a school and a supermarket. W-T-F is the BPDA thinking by not having those things planned and built out early on by developers? You can't have a family in a neighborhood if there isn't a place to buy food and send the kidlets off to school. Seaport should be a 101 What not to do case study in urban planning.

Squidport Square has been diluting their project in waves. The great park that was supposed to be there has been reduced to a median strip, and the performance space whittled down. If Walsh lets any more dilution he's just signaling for developers to keep promising big at first knowing they can bland it up later. If this part of Boston is so booming, why does Walsh act like we have to beg developers to do anything there and let them (eventually) do whatever maximazes profit most in the short term. The area is as interesting as an airport.