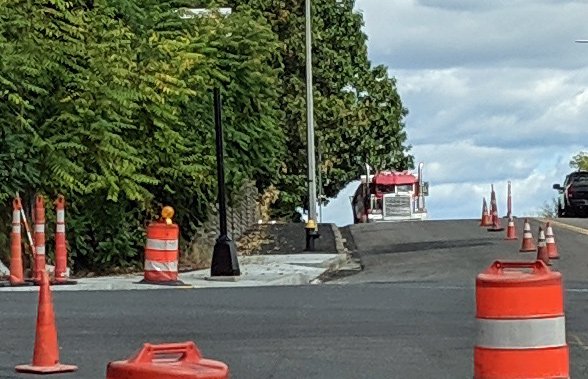 Workers this week have been busy getting both sides of the Father Hart Bridge in Readville ready for honest-to-goodness traffic signals.

They've installed the poles on which the lights will sit and are wiring them up - and putting in the underground cables that will make them work - on both sides of the span, also known as the West Milton Street Bridge, at the north end of the Readville train station.

The lights will be particularly welcome at the bridge's dangerous intersection with Hyde Park Avenue, which has a hill on one side, a sharp curve on the other and, of course, a never-ending supply of marauding Massholes - now joined by an ever growing number of Amazon van drivers scuttling to and from that company's warehouse on Sprague Street.

City officials have been promising traffic lights at the bridge since the days when Tom Menino and Rob Consalvo were in office, but proposals always foundered on bureaucratic wrangling - Neponset Valley Parkway on one side, and the bridge itself are owned by the state, Hyde Park Avenue on the other side is owned by the city.

In 2017, Mayor Walsh included $1.4 million in the city budget to pay for the lights, sidewalks and similar improvements to the superannuated lights in nearby Walcott Square, but those plans seemed to have disappear as well - until earlier this year, when actual work began, first in Walcott Square and through the tunnel that connects half of Readville to the other, more recently in the area of the bridge.

The need for the improvements has become even more critical over the past couple of years, with residential complexes being proposed at either end of Readville station - one right next to the bridge.

The bridge, which spans the Northeast Corridor and the Franklin Line (not shown: The bridge's road surface, which appears to consist entirely of patches covering other patches): 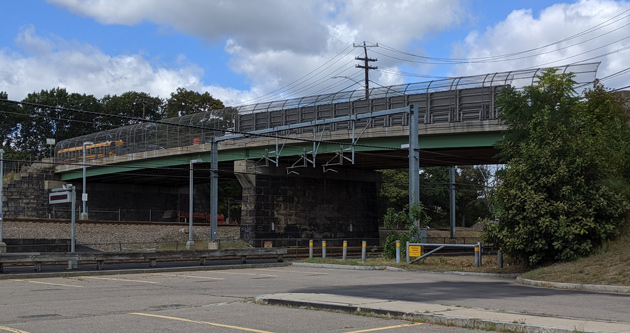 For every new traffic light they put in, they should remove two. Why don't Boston area planners understand that traffic lights are not the best way to control every intersection?

Ah, so you've never been to Readville

Most people haven't, so nothing to feel ashamed about, but if there is any intersection in the entire city that should have had traffic lights installed decades ago, it's the intersection of West Milton Street and Hyde Park Avenue.

Not commenting on this light in particular. I think I've been through there and thought "they should have a light here." There are other places in Boston where you don't need a timed signal on a full cycle 24 hours a day. This is not one of them.

The signals in my area,

The signals in my area, Ashmont and Fields Corner in Dorchester, all seem to switch to blinking green/yellow/red overnight, up until 6am.

Yes. Many city intersections turn over to blinking mode at 3 AM.

Could do what many drivers do

How is this for an answer

If you don't like it, buy a bike. You still have to stop for them, but you don't have to wait.

Please point me to the location of a Bluebikes station in Hyde Park.

Why don't you have to wait?
Other than a non-functioning traffic detector, which you wait for at least one time to realize it doesn't detect a bicycle and rider, don't you "have to" wait for a green light? Idahoan in Boston Stop?

They have finally put in stoplights at the corner of HP Ave and Dana ave as well! I can't wait to see them activated. It's gotten so horrid all around Hyde Park. I am wondering if part of the problem is Waze, routing people from the highway.

We know this much is true

Any and all driving you do contributes to traffic.

on both ends of the bridge will be synced or there will be lot of blocking of boxes on both ends. Should be fun to watch.

That would be nice. But even

That would be nice. But even an unsynced light would be better than a stop sign where like 3 cars per minute can go.

Unless, of course, the light is red 90% of the time for no reason. Do we know if this light will have an exclusive ped phase or other complications?

Both intersections will have

Both intersections will have exclusive ped phases

♪ We're depending on you son ♪

Patches on patches describes most main streets in Boston. I have noticed that side streets in my Dorchester/Mattapan neighborhood have been resurfaced lately.

I work in the complex on Sprague St next to the Amazon Warehouse. It will take nothing less than an act of god (or maybe a violation dispensing police officer) to keep those intersections clear of cars "blocking the box" and causing gridlock. I hope whoever is assigned the monumental task of timing those new lights has a few degrees in urban planning and traffic mitigation. And there are roughly 700 new residential units scheduled to be built on either side of that bridge.

"It's ok. The residents of

"It's ok. The residents of those units are going to be noncar driving, train riding Millennials. They don't even want cars." - 60 yr old contractor