River Street in Hyde Park could get 48-unit condo building; second residential proposal for the long somnolent street in a week 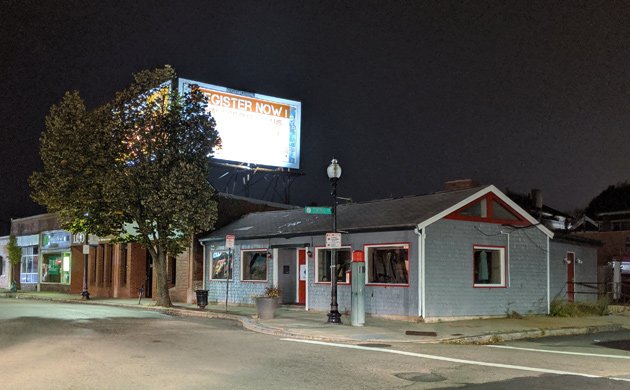 Block on the chopping block.

Two developers are looking to buy the most of the block where Dempsey's bar used to be on River Street in Hyde Park and turn it into a four-story building with 48 condos and a corner store, possibly a coffeehouse.

Vin Norton of UrbanMeritage and Rob Gatnik of LandWorks presented what they said were very preliminary plans tonight to the Hyde Park Neighborhood Association - a week after another company proposed a five-story residential building on the other side of the train bridge on the site where Junior's Automotive recently closed.

Gatnik and Norton said they have yet to close on the property, which runs back to WInthrop Street and includes a garage and parking lot off that small street, from owner Chris Lydon, let alone develop more formal plans for submission to the BPDA.

Unlike other developers looking to build in Hyde Park, however, they said they appreciate the work that went into revising the neighborhood's zoning a decade ago and that they are looking to build something that would not require any zoning variances - the Junior's building would require several. This would include building a garage with space for 50 cars - one for each condo and two for the retail space, as required by the land's zoning, Gatnik said.

Gatnik said he particularly appreciated the zoning along that stretch of River Street, across from the Municipal Building, which calls for increased residential density and commercial space on the ground floor. However, while their proposal does call for commercial space on the corner, much of the River Street side would include store-front-like windows that would be used to advertise what's happening in the corner store or or restaurant, rather than be the fronts of actual stores.

One resident asked why they couldn't simply dig deeper and put the parking further in the ground, which would free up more of the ground floor for retail. Gatnik said excavation is expensive and that they'd have to balance the extra costs of digging deep enough to do that with the sort of prices people who'd be interested in moving into Hyde Park would be willing to pay.

Joe Garufi, co-owner of the Antonio's Bacaro restaurant across Logan Square from the former Dempsey's, praised the idea. Garufi said the building would attract younger people to the area, helping to turn it into more of a vibrant shopping district. He said 48 condos represents "a lot of people walking around the Square."

Gatnik and Norton said they hoped they could return to the neighborhood association in a month or so with more detailed plans for the proposed building.

Rough conceptual proposal for the shape of the building: 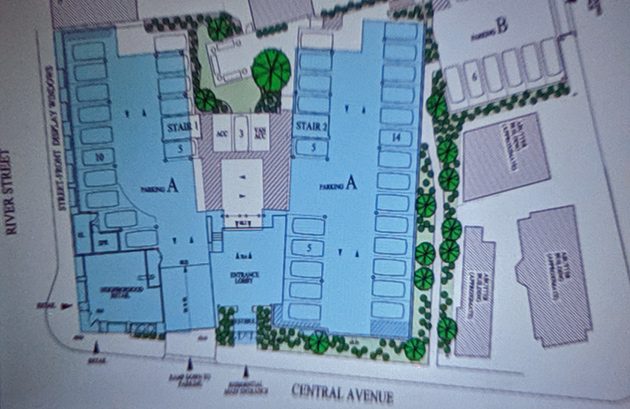 48 Units here. 400 Units there. Hyde Park's traffic woes are about to go from bad to constant gridlock. Time to sell?

I don't think it will be young professionals, section 8 more like it. Juniors Automotive 32 more units. Sprague St 400 Units. Where is all this money coming from. Just hope we don't go full circle back to 2008

But, hey, sell and move to a car habitat suburb if you prefer.

You've never been to Hyde Park.

Traffic is bad everywhere. The square needs livening up.

Fantastic. Exactly what this stretch of Hyde Park needs. Condos like these are the starter homes for young professionals and families who will spend money locally, like Mr. Garufi said. Lots of empty nesters moving back into the city too. Love this proposal.

I grew up in Hyde Park and I

I grew up in Hyde Park and I had moved quite a few times and now you people want to build condos what about low income or senior housing. I would like to come back to Hyde Park but if you building condos they are very expensive. I think you should do lowi imcome And senior housing.

I haven't written about it yet (sorry!), but the city looks to be selling off the old Rogers School for senior housing.

I heard the Barton Rogers was going to be a Lesbian/Gay Seniors housing.

Senior Housing is over built in MA

There is already a glut of senior housing. It is a favorite refrain of NIMBYs, though, the whole "I don't want THOSE people - build senior housing".

That, and seniors aging in place in 5 bedroom homes is why there is too much senior housing and not enough housing for younger people.

I am not a real estate developer. Just someone who has lived in this area my whole life and likes to see growth. That count?

Every post you write is for these developers so you must be part of it.

Who built the house you live in?

I'm betting that it was someone who bought a large tract of land and ... gasp ... DEVELOPED it.

...for excellent word choice with "somnolent"