Looks like they're serious about extending the Green Line 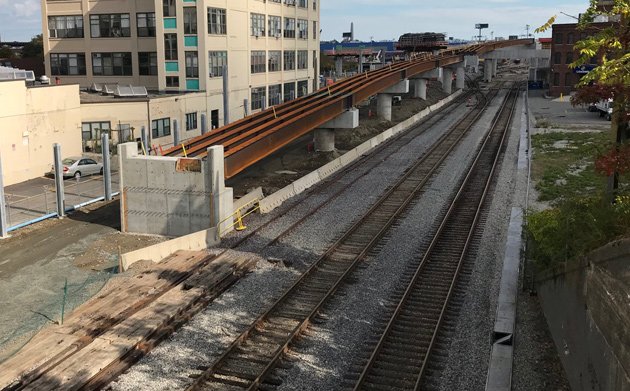 Ted took some photos of progress on the Green Line Extension past Lechmere, including construction of the flyover for the branch to and from Union Square in Somerville. 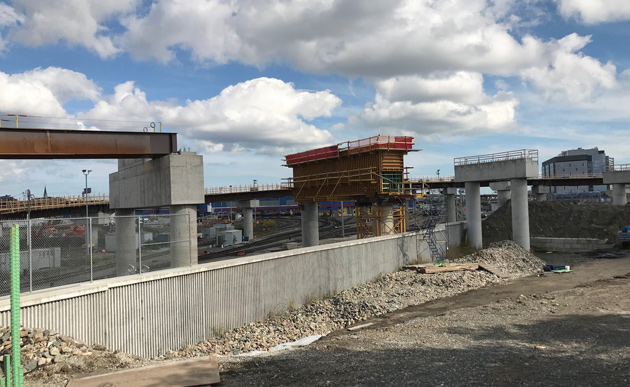 I attended the Rail Users' Network Annual Meeting and rail advocacy conference on Friday afternoon at the Metropolitan Area Planning Council offices downtown. I was there as a support tech to run PowerPoint and other media for MAPC, MassDOT, and MBTA reps.

We had a very interesting PPT presentation from GLX project manager John Dalton. There is a lot of hard construction work yet to be done including movement of commuter rail tracks into a new alignment, but this is well underway and on target so far -- -- at least under the current schema, not looking back at the many delays that the project faced.

One of the RUN board members writes for Railway Age Magazine and will be authoring a summary of the event in a future edition.

The discussion by MAPC reps on "fare equity" was a major awakening. This is not just an issue about parking and fares from Readville, Hyde Park, and Roslindale, but how to address reasonable fares for people to utilize commuter rail, especially low income people that live near the transit and rail systems now, but who cannot afford the cost of a ticket or a pass to improve their employment opportunities, indeed even to reach reasonable medical attention at major medical centers. The problem is far-more serious than you might think in the major gateway cities that already connect rail to Boston. The graphs and charts were frightening. Even for people with a reasonable income the cost of a rail pass can exceed their housing obligations. This is only one reason why some people drive -- lower cost overall.

The issue is being studied. How to fix it is yet to be formulated.

It's not that hard: lower the

It's not that hard: lower the fares.

I can only speak for the Kingston and Lowell lines which I ride frequently. The current service is already at capacity during peak times. It's not uncommon for the trains to be entering or leaving the stations with so many people standing that the conductor can't move through the train. And this just makes it take longer at each stop for people to shuffle out.

I'm all about lowering fares ($24 round trip to Kingston is nuts) but they also need to expand capacity. This means more trips, not just more seats. They also need to allow passagers to board and exit at all doors, not just the ones with a conductor. (At least for high level platforms.)

They did just order some more

They did just order some more double deckers to increase capacity which should help.

The answer is Regional Rail

(and some sort of fare equity -- possibly income-based)

I certainly don't want to pay

I certainly don't want to pay for it. I want the commuter rail to run more efficiently, so we can have more service at less cost. 3 conductors on a weekend train with one car full of passengers is just plain stupid.

Get modern equipment that can be run by an engineer and one conductor, and run it more frequently.

The roads are jammed at rush

The roads are jammed at rush hour. If we can't lower the fares to encourage more train ridership, we're kind of screwed.

It doesn't *solve* the problem, but having rush hour fares higher than non-rush helps.

Folks can (often) schedule their doctor's appointments during mid-day, and we'd rather them ride mid-day than contribute to the crush at rush. Similarly, many low wage jobs in Boston are off-hours -- 7-4 shift, etc. It would allow the folks who work those jobs a lower fare as well.

It's not perfect to be sure, and you can respond with all kinds of "whatabouts." Still, it would help incent people to ride off-peak when possible, and provide some folks who work hard at custodial, construction, nursing, and other non-9-5 jobs a way to take the T for less money.

Many CR lines are full during rush hour, which calls for (a) more runs during the rush, and until then (b) raising fares rather than lowering them.

How about they restore service to levels enjoyed in earlier years.

In 2012 they raised the fares and cut service. Know what happened?

Raising Fares to drive off business IS NOT A SOLUTION. Improving service and reducing fares to get people out of cars IS A SOLUTION.

Most jobs in the Longwood Medical Area pay for half of the train fare for their employees and the rest is deducted tax free from their paychecks. That works out to a monthly pass for less than $50. Is that really a burden financially still or more of a lack in prioritization of expenses...

You can't schedule your life

You can't schedule your life around riding the Commuter Rail off-peak when the train only runs every 2 to 3 hours at those times.

Actually the GLX is behind schedule because of faulty work

The temporary heavy rail tracks in the GLX corridor for CR & Downeaster were so poorly built, both Keolis and Amtrak rang alarm bells in DC. Shortly afterwards, the FMCB blasted Dalton's crew. There's video of the FMCB scolding. Every transit advocate should look at that video. Either Dalton is telling different stories to different audiences, or these transit advocates don't have a clue. And from the looks of that posted ramp photo, the poor construction extends beyond the temp tracks

And the video is

I think this person is referring to the FMCB Meeting when this was brought up back in August.

You can re-watch the stream if you'd like. I don't know what part of the meeting covers that in the video (i.e. the timestamp): https://www.mbta.com/events/2019-08-12/fiscal-and-management-control-boa...

No comment from me on this, just thought I'd provide some further info.

I read the article. I would say the point where they say that some things go slow while others go fast is a bit of BS. I was honestly looking for proof of what was said (I tend to be leery of anons posting how GLX is going to hell in a handbasket, but even if they posted the link, I'd have been appreciative.)

The local elections in Cambridge, Somerville, and Medford

Are sure to be dandies.

Not yet, but soon. Once the

Not yet, but soon. Once the branch is operating an extension to Porter Square continuing along the commuter rail route is low hanging fruit. Mini urban ring giving access to North Station and Government Center without crowding and changing through Park Street.

The Green Line is so slow

The Green Line is so slow that it would be significantly faster to take the Red Line from Porter to Park and walk to Government Center. And nobody wants to be at North Station except when there's a game.

They have left the option open with the Union Square design

Although from what I've heard, the MBTA right-of-way gets a lot narrower between Union and Porter, so it will be a bit more complicated and/or expensive

There are solutions but

no political will to implement them. The state needs to subsidize transit, full stop. It is not a profit generating machine,a s we have all seen over the past few decades. keolis took over the commuter rail and had to cut staff and service and raise prices so they could turn a profit. And it still isn't making them much. They keep raising fares and cutting service on the T for years, and let the stations and infrastructure crumble and they still cry poor. This is because public transit will NEVER MAKE MONEY. Roads are subsidized like crazy, as a public good. I certainly don't argue that. I like food being delivered to my local supermarket and police, fire, and medical vehicles to get around with ease. I DON'T agree with tolls to pay for "the king's road." The pike was paid for years ago, then they spent millions on a booth-less toll system when they should have just ripped out the tolls and stopped there.
The elephant in the room is the gas tax. it needs to be raised. BADLY. And I am a driver. A binb goes off in Saudi Arabia and prices rise. Countries we can't even pronounce the names of go to war with each other and prices rise. People gripe but no one stops buying gas. least of all the commercial drivers/businesses, that is steady income and price increases are passed on to the customers. This goes for airlines trucking, and construction mostly. If they raised the gas tax by 10-15 cents a gallon and earmarked all that for transit it would generate millions upon millions of dollars a year. And guess what? No one would bat an eye. people would bitch for approximately a week or two and then everything would go back to normal. They raised the price of a safety inspection sticker. they raised excise taxes, they raised registration and plate fees, then revamped the safety inspection stations are started rejecting cars left and right, costing driver millions of dollars and repair shops that do inspections thousands for new equipment. Everyone bitched about it. What happened? Nothing. The world turns.
Raise the gas tax you cowards! Fund transit. Watch ridership grow, the roads clear, and more fuel efficient vehicles fill the roads for those who still insist on driving. It kills so many birds with one stone and politicians know this but are afraid to lose their next election. Like I said....cowards. Its not like some private sector goblin isn't going to hire you at six figures as soon as you are un-electable. look at Martha Coakley.

First let's get rid of all of the subsidies for the rich who are driving around in their Teslas and almost rich driving around in their Leafs and Volts -- they don't even pay the current gas tax -- for all the wear and tear they deliver to the highways. They often get free [gasoline -- er recharges at places such the MOS] and often preferred parking places [Alewife]. We are subsidizing many of them to buy their Tesla [Fed and State taxes], subsidizing many to plug into their subsidized electricity [solar panels on the roof with discount electricity when needed at your expense -- skimmed off your electricity bill].

Once that is done -- then we can start to think about how to pay to keep Greater Boston moving. I could see installing electronic tolling on all of the divided access roads -- those:

That way the poor farmer in Worthington, or the worker in the small factory in Longmeadow, or the attorney in Greenfield -- who might go to something or somewhere in Boston once a year is not burdened with paying for something they will most likely never use.

Hyundai to pour $400 million into artificial-intelligence foundation in Kendall Square
If you want to sue after your kid gets screwed by a public school, you have to notify the mayor first, not the superintendent, court rules
Red Line riders don't have a prayer when a train dies at Kendall Square
Pfizer, Covid-19 vaccine partner sue maker of failed vaccine to keep it from claiming they stole from its patents
Red Line riders lose any glee due to dead train at Kendall/MIT
Smoots Forever