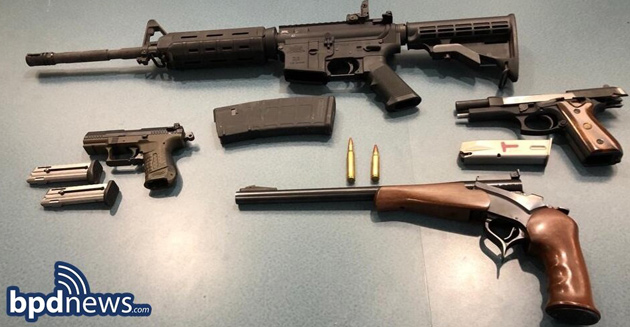 Boston Police report arresting a Vermont man with a violent criminal record that dates to the 1980s and an alleged accomplice from Revere and seizing an assault weapon, three handguns and ammunition in the parking lot of the Murphy Skating Rink on Day Boulevard Thursday afternoon.

BPD gang and SWAT team members, along with state troopers, US postal inspectors and DEA agents were waiting there around 3:10 p.m. for Dominick Bailey, 54, of Vershire, VT, and Glenn Lacedra, 58, of Revere, after receiving information the two were planning to sell or trade the weapons in Boston, police say.

When the suspects drove into the parking lot of the Murphy Skating Rink, officers stopped their vehicle and removed them from the vehicle. With the suspects outside the car, officers were able to discover and recover several firearms, including a .223 caliber Palmetto Armory/PA-15 AR-15 rifle, a 9mm Taurus PT92 AF handgun, a .22 caliber Walther P22, a long barrel Thompson Arms Co./Encore pistol and several rounds of ammunition. Both suspects were then placed in custody on scene without incident.

Since 1992, Bailey has been sentenced twice to a total of 6 1/2 years in federal prison for violating a federal law against convicted felons owning guns.

In one of those cases, in 2005, he was charged with convincing several teenagers to help him bust into a storage locker in New Hampshire, from which he stole four weapons and ammunition. The judge in the case ordered him held without bail before his trial after finding him to be "a violent, manipulative felon."

The Question to Be Ask

When law enforcement cease recover take off whatever you want to say, a firearm off the street ; the question everyone should be asking

The Boston Assault Weapons Act of 1989 only applies to Boston residents. But it's nice to see the city finally enforce it after 30 years of never having once done so.

Both these felons have lengthy criminals histories including priors for being felons in possession of firearms. So why haven't they stayed locked up?

Seems like the same cast of clowns keeps getting arrested and going around the merry go round to do the same stuff over and over again with minimal consequences.

The Boston Assault Weapons Act of 1989 only applies to Boston residents.

Where does it say that? The MA Gun Owners Action League has helpfully posted the entire Act for your convenience. The only reference to Boston residency that I see is that they need additional paperwork to legally transfer the weapons, not that they are the only ones prohibited from doing so.

In the city of Boston, it shall be unlawful to sell, rent, lease, possess, purchase, barter, display, or transfer an assault weapon.

Chief Ron Glidden's book and the city's legal counsel in the 90s thought otherwise. I'd ask Jason Guida that used to run the state's FRB about it.

Ron Glidden, onetime police chief of the tiny Berkshires town of Lee, who is known for unusual interpretations of firearms laws? This is your expert on laws pertaining to Boston residents? Show me a judicial ruling that the law only applies to Boston residents, or stop digging.

Uh... Glidden's book is the

Uh... Glidden's book is the the authoritative tome on MA gun laws used by almost every Chief of Police in Massachusetts. The guy is an expert witness in court and provides lectures at police academies.

Kind of like Maasad Ayoob that's a nowhereville Police Chief but has written a ton of books, become a training guru, and served as an expert witness in a number of high profile cases.

All nobodies that get published and become a big deal in the LEO training world that 99.9% of everyone else has never heard of.

Unless Glidden is a judge who's ruled on that aspect of the law, he's still Just Some Guy with an opinion. Don't tell me that he testifies in court as an expert on what the law is. I won't believe you.

They also forgot to charge

Why haven't they stayed

Why haven't they stayed locked up? Because every single person with these charges isn't forever a threat to society. Is your town really littered with tons of 50 year old men illegally handling guns?

Do you have any familiarity with our prison rates? They're some of the highest in the world. We hardly struggle to lock people up.

Why haven't they stayed locked up?

The man from Vermont has terrorized the two small towns of Vershire and West Fairlee for years without any repercussions. The police arrest him and the court lets him go. It does no good to file a report against him, it's a waste of ones' time. I was happy to see that this article did bring up the fact the he IS a convicted felon and a very dangerous person.

Odd place for a meet-up

That parking lot is tiny - like 10 spots. The big lot by Sullivan’s would have made more sense.

Does not sell rink pizza.

The pizza at the Murphy rink is surprisingly good.

Are these the same two?

Are these the same two?

The Vermont guy's lawyer pleaded for court leniency because he had serious mental problems, allegedly stemming from a 1992 incident in which he suffered a brain injury by getting whacked in the head.

Prosecutors argued he had a criminal record well before 1992 and the fact that he was able to recruit a bunch of kids to help him break into the storage unit was proof he still had his mental faculties.

Yes, same two. Living in the

Yes, same two. Living in the same area as one, I can tell you that he is a menace. VT hasn’t been able to do anything, so I’m glad someone finally did.

Interesting-looking handgun at the bottom right of photo.

You can change barrels and ramp it up to .50 caliber for stopping vehicles.

Kind of the spork of firearms - part rifle, part pistol.

BPD, State and feds all working together. Teamwork!

Despite all the talk of jurisdictional disputes, it's nice to see BPD, MSP and the feds working together with an excellent result. I'm sure the state charges are a placeholder until the federal indictments can come down. Federal court is where long prison sentences are more likely to be handed down. It will be interesting to see if any of the guns were used in prior crimes.

Wow...I wonder how much

Wow...I wonder how much overtime this comes to...

Probably around four guns' worth.

Probably not as much OT as a

Probably not as much OT as a shooting would lead to.

Sounds like that great Robert Mitchum movie with Peter Boyle....cept he was gonna be up in NH for that cigarette bust...knew about a guy selling guns and wanted to trade infos...man what a great movie...great scenes...