The Zoning Board of Appeal this week approved a plan by the owner of a parking lot on Cambridge Street in Charlestown to tear down a warehouse and create an expanded lot able to hold up to 431 cars of workers for a nearby employee.

The Owens family used to lease the lot to BPS, which stored about 100 buses there, but BPS moved the buses to other yards in Dorchester and Readville in June.

At a zoning-board hearing on Tuesday, the family's attorney, Stephen Miller, said the newly expanded lot would be used solely for parking by employees of particular employer. He declined to name the company or institution, except to say "it's one that doesn't own a business in Everett" - he was betting the board would understand which large employer there he meant.

The expanded lot will have new fencing, greenscaping and striping put in, he said, adding it will also be serviced by shuttle buses running between the lot and the leasing company's property.

Although the lot would not normally be open to the public, Miller said the Owenses would open it at night during snow emergencies as a place for local residents to park.

He added the Owenses no longer have any plans to erect a large billboard on the property.

The mayor's office and aides to City Councilor Lydia Edwards and state Rep. Dan Ryan supported the proposal. Nobody spoke against it.

Almost like no one read the Globe last week. And we don't have enough housing. Plus, the T doesn't know where to put its bus fleet. But, yeah, great, moar parking!

As least we aren't stuck with it

As many have noted here, parking lots are very easy to erase and build upon. Witness the "but my parking!!!" angst over the former lots by Forest Hills and in Fort Point.

Also note that this area is Most Likely to Go Underwater in a Storm - at least until they raise other bits in the area. That might have worked against development as housing. As things currently stand, it isn't a good idea to build anything here: 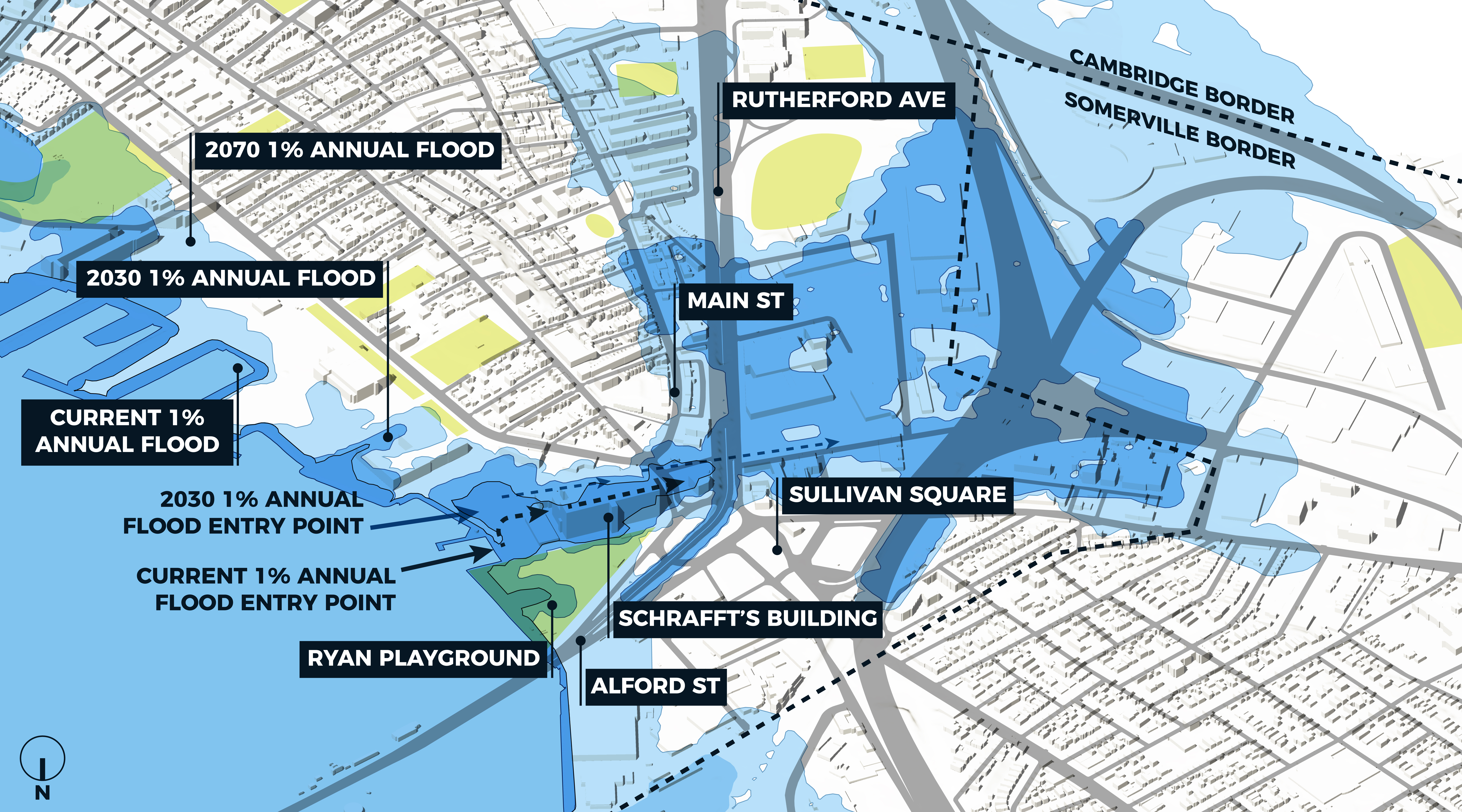 "It isn't a good idea to build anything here"

Never heard of it?

Actually, the colonial Bostonians were way ahead of us - they had a tidal mill going in the area around North Station from a very early date.

The water went into a retention pond and ran out again to power a mill.

I think that's a good point.

I think that's a good point. I want the curb back. I know people aren't stopping driving but let them park their cars out of sight. We need the space for people.

Whitings milk is making a

Whitings milk is making a comeback !

Was "it's one that doesn't

Was "it's one that doesn't own a business in Everett" code for "not the casino"?

What a set back for decongesting the Boston area.

It’s literally right next to a subway and bus hub!!!!

Can we guess who the employer is?

I don't know that area well at all, so I'm out. Anyone else?

one going up on 28 near lechmere? Lots of construction there

Seems as though any for profit biz would be making a big deal about this.

Their new office is designed *NOT* to have their workforce there at all times, but to have hoteling spaces, where people come in a few days a week and people can work from home more.

The parking situation is no different. It's designed to allow for flexibility for the workforce at partners and their flexible schedule. The garage is also very flexible (go park in it one day, its all high tech)

Alot of money, planning, and energy went into planning that building and parking garage, I'd be *very* hard pressed to know they were looking to do this.

However, my guess would be a company in the Schrafft's center.

Ever been to their Assembly Row campus?

They have far more parking than they need and allow members of the public to park and take the T for a very reasonable fee.

I've done that a number of times when I needed to get to the north of the city after work.

They also have some very nice undercover and secure bike parking for anyone who wants it - their workers have their own indoor cages and showers in the "hose out" levels of the building.

I enjoyed the use of 'Owenses' in this post.

Even a warehouse isn't as bad

Even a warehouse isn't as bad a land use as a giant car parking lot near a subway station. For people who won't even be riding the train.

This is only happening because the business in Everett was required to agree to move employee parking to another town. It doesn't serve any transportation purpose -- it's basically tossing your garbage over the fence.

Some will never get it

People drive cars to get where they want to go, despite what others say.

The world shouldn't give them special privileges and make us all pay for their choices ... or make stupid planning decisions on their behalf.

That "nearby employee" has

That "nearby employee" has got to be an equal opportunity employer.

Perhaps some sheltered bike parking would be appropriate.

Don't know if they're sheltered, but

Yes, the parking lot will have bike racks.

Drivers, pedestrians, bicyclists get to share in angst from Orange and Green Line shutdowns
Former Charlestown High student charged with gunfire as school graduation ceremonies were starting; others still sought
The dark night returns: Eversource grid in Boston flickers out across city
Yes, four of those weird helicopters just flew over Boston
Jury convicts Charlestown man of kidnapping woman, raping her over three days
When will the new North Washington Street bridge be finished? God only knows