When the Back Bay was actually a bay 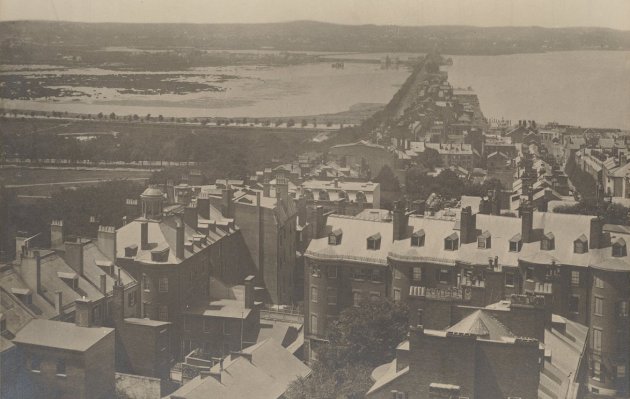 The Emerald Neclace Conservancy posted this photo, taken from Beacon Hill in 1857, that shows Beacon Street extending across the Back Bay to the rest of the continental United States. To the left of the street is a spit of land, then called Gravelly Point, that eventually became the Fenway.

A word about street names

Beacon Street is of course so named coz it goes to/from Beacon Hill. There were three peaks in that neighborhood (Beacon Hill, Pemberton Hill, and Mount Vernon), Beacon was the highest point and most visible to the rest of the city, so a fire (a beacon) was lit there whenever it was important to notify residents that something important was going on.

Tremont Street, meanwhile, was named because it, too, went to/from those 3 hills. (Maybe named by someone who went to Boston Latin School.)

The William Martin book, "Back Bay".

"To the left of the street is

"To the left of the street is a spit of land, then called Gravelly Point, that eventually became the Fenway"

I'm pretty sure swamp/water most visible is what became Back Bay--not Fenway. That swamp is south of Beacon Street, as Boston Common (and what would become Arlington Street) is the edge of the land. Fenway is the second area of water on the horizon where you can kind of see the 'emerald necklace.'

is the second (further away) of the two spits of land shown here. What's now Parker Street / Hemenway Street was a second dam that met the Beacon Street dam. This page shows the old geography overlaid on a current map.

to imagine if this project was proposed today.

150 years ago, we were filling in wetlands and had clear cut the forests of New England. I can understand why developing nations look at our external environmental demands and wonder why they have to do what we didn't even though the stakes are higher now.

We all do what we have to do to survive

As you say, we raped the land in North America and now, looking back, we can see how horrible that was. However, at the time, people needed wood to build houses and to stay warm and to support industry. In retrospect it's amazing that we treated the land so poorly and that it has, for the most part, come back amazingly well.

The once and future tidelands

As it was and too soon shall be.

We have a lesson to learn from both the photo and also the comments -- first everything changes and trying to put your current ethos into a different era is very difficult at best.

The photo:
It shows an already human manufactured landscape -- Beacon Street sits atop a stone dam which was constructed for Green Power using the Boston 10 foot tide -- I'm guessing that the photo was taken closer to Low Tide than High Tide.

This dam actually created the Back Bay as before it -- there was only the Tidal Charles River -- circa 1700 [before any westward filling beyond the boundary of Boston Common indicated by the Line of Trees Left toward Center] -- looking a whole lot like the Ipswitch River near where it meets the Atlantic. At high tide -- a ship could sail up the river to Cambridge at the foot of the now Longfellow House lawn -- indeed there was no obstruction other than a gentle shallowing past Watertown and Waltham -- at least until a Mill dam was built in 1634 at Watertown.
Hence the possibility however slight that the Charles might be the fabled Northwest Passage when John Smith sailed into Massachusetts Bay and up and down the coast from Portland Maine to Cape Cod in 1614 -- his map of 1616 "New England" showed the Charles [named by Prince Charles after himself] extending off the western edge. At low tide by contrast there was just a small meandering stream amidst a salt marsh [MIT] and mud flats.

While the local population built fish weirs and other small structures to harvest the anadromous fish [Alewife, etc] for hundreds of years their impact was mostly on the fish not on the flow of the river [A large Fish Weir was excavated during the construction of the foundations for the 1948 John Hancock Building [the one with the weather Beacon].

The first change to the River itself was in 1634 when a Dam was built at Watertown to form a mill pond for a Grist Mill. From that point on [in time and space] -- there was a well defined Upper Charles separated from the Tidal Charles River Estuary [now the Charles River Basin] gently merging into Boston Harbor. This led to the meaning of the Famous Lanterns which Paul Revere had hung in Christ's Church [Old North] announcing on the night of April 18, 1775 the signal of Two if By Sea for the British Regulars.

The By Sea meant the British Army which had been camping on Boston Common was boarding small boats from the bottom of the hill below which the Boston Common Parking Garage is located to cross the Charles to Lechmere Point in Cambridge and thence to march over today's "Battle Road" to Lexington and Concord and into History. After we won -- about late 1790's the filling of what would become the Back Bay began -- first the tops of the Trimounts were dumped into the shallow water to create what is now Charles Street [1799].

Some folks [Uriah Cotting and the other founders of the Boston and Roxbury Mill Corporation] in 1814 came up with the idea of turning the Back Bay into a Tidal Huge Mill Pond*1 by damming the Bay from the Charles River itself with gates to allow water in at High Tide and Mills to allow the water out during low tide. It was a complicated scheme begun in 1814 by Uriah Cotting and completed by Loammi Baldwin [same as Middlesex Canal and Baldwin Apple, etc], in 1821 and finally declared a failure about 1850 -- that's what is shown in the photo and a similar period map*2 -- By the way Gravelly Point was a sand and gravel spit even a low tide sticking into the River about where the Hynes is located today [Mass Ave and Boylston].

Shortly after the Dams were completed -- there were in fact 2 Dams constructed in the project: the

essentially from Charles Street to Kenmore Square where there was a natural highish spot [Sewalls Point] -- isolating about 430 Acres, and the Cross Dam which ran from the Mill Dam [essentially Hereford and Beacon St] over to Gravelly Point [essentially Mass Ave at Boylston] -- seen in the photo at a slight diagonal direction -- it divided the Mill Pond iinto the Full Basin and the Receiving Basin. Across the tops of the stone Dams there were toll roads [later free]. Later as the predicted Mills failed to manifest themselves the Company invited two Railroad Companies to build tracks diagonally across the smaller basin atop trestles and causeways.
The net of all this was that while there was water power and connectivity there was also pollution as the natural Tidal Flushing was lost to the managed flows and increasingly development on the edges of the basins.

Concerned about health -- The Commonwealth bought out the Dam and Water Companies and began a staged and self-financing plan to fill the Back Bay. This filling began just about when the Photo was taken and continuing for the next 40 years. The result of this process was to creating the existing Back Bay [including a remnant of the Seawall visible just off the in-bound lanes of Storrow Drive -- except that the area of today's Storrow Drive and Esplanade as well as what is now Memorial Drive and MIT on the Cambridge side were still Tidal [alternating between salt grass and mud with water of varying depths] at high tide.

Eventually that issue and the continued flow of waste from the Muddy River was cured by first Olmstead's Muddy River Improvements -- leading to Creation of the Fens and later the MOS Dam -- once the Dam was in place in 1910 -- MIT and The Esplanades on both sides were quickly created on the newly made land.

A final major problem of what to do with the water from the Charles after a heavy rain if the Tide in the Harbor was high -- the Back Bay would flood. This was resolved by the construction by the Army Corps of Engineers of the New Charles River Dam at the entrance to the Harbor -- equipped with Fish Ladders for the Alewifes and Huge Diesel Pumps to stop the flooding.

So what began as a small mill at Watertown was ultimately responsible for Boston as a World Class City through the creation of land, roads, sanitary improvements, Parks, MIT and the Museum of Science -- not necessarily all by intention.

And what of the Comments:
What would happen if we came up the Charles as it existed in 1634 Today with our existing laws about wetlands and estuaries -- well probably Boston would be a small settlement on the hills and possible extending onto a collection of islands in Boston Harbor. All the rest is pure speculation.

Suffice it to say -- the World is better off today because the people who came with John Winthrop seeking religious freedom for themselves -- brought with them the Judaeo-Christian Notions that Man has the Right of Dominion over all the creatures and the lands, seas, and skies. However -- also that Man is the Steward of the Earth -- admonished many times by both the Jewish and Christian God to use the earth wisely and Conservatively.

In 1814, the Boston and Roxbury Mill Corporation was authorized by the Massachusetts legislature to build a dam from the corner of Charles and Beacon Streets in the east to Sewall’s Point in the west (at that time in Brookline; what is today Kenmore Square in Boston), separating about 430 acres of tidal lands from the Charles River. A Cross Dam was built connecting with the Mill Dam at a point about 210 feet west of what is today Hereford and running southwest at approximately a 45 degree angle to Gravelly Point (at about what is today the intersection of Commonwealth and Massachusetts Avenues). The Cross Dam divided the tidal lands into two basins. A western basin (about where the Fenway neighborhood is today), called the Full Basin, and an eastern basin (about where the Back Bay neighborhood is today), called the Receiving Basin. Water was allowed to flow into the Full Basin from the river at high tide, then into the Receiving Basin and then back into the river at low tide. The tidal flows were used to power mills. A toll road was built on top of the dam and is today’s Beacon Street. The project was completed in 1821 and was not highly successful.