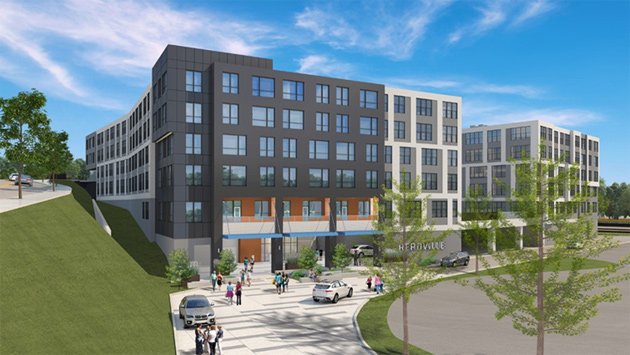 The Zoning Board of Appeal today approved 247 apartments in two buildings - with a common base - on Sprague Street just south of the Readville train station.

Developer Jordan Warshaw's plans call for 251 parking spaces. The proposal also calls for a coffeehouse and a sports bar, but Warshaw's attorney, John Pulgini, said Warshaw would seek board approval for those later, after he finds operators for the two spaces.

At seven stories, the buildings would be among the tallest in the area, but Pulgini said that much of the structures would not be visible from the street because the land is down a steep hill from Sprague Street.

Board Chairwoman Christine Araujo expressed some skepticism about the number of parking spaces - Hyde Park zoning would have required more than 500 spaces.

"This is not easily accessible by public transportation," she said, echoing skepticism by some in the neighborhood that Readville is hardly an adequate public-transit station.

Pulgini, however, noted that just yesterday, the state said it would add a total of eight new weekday trains on the Fairmount Line, which, despite its name, begins and ends at Readville, and that while "that won't be quite rapid transit," it's better than what Hyde Park is used to on the line.

Warshaw had originally proposed four buildings with 521 units - and a tower that would have read "READVILLE" in large letters.

A neighborhood liaison from the mayor's office and two residents supported the proposal. Nobody rose to object at the hearing.

Adds stops on the Frankline line which routinely pass Readville. Its just adding a stop to an existing train schedule, seem simply enough!

The CR is expensive from Readville. Bus/OL are cheaper but take 3x as long. From Adam's link:

As far as any infastructure, there is a shop in Wolcott Square and a Dunkins but otherwise not a lot nearby.

The 33 bus is closest but is a round about route to get to Cleary Square.

The 32 bus leaves more frequently but you'd have to walk a bit to get there up/down hills with groceries is not easy. (Google map shows it as 1/2 mile walk.. but its pretty congested during rush hours with school bus depot, Amazon trucks and normal car traffic)

Its interesting that 14 unit building in JP with 26 spaces is rejected where JP has so much more nearby and this is greenlit with so few spaces.

Warshaw & Pulgini should ride a Fairmount train. They're garbage

The new 8 train trips just means 8 more garbage train trips. Warshaw and Pulgini should look into the Indigo Line project and its many setbacks.

The Fairmount trains idle right next to their proposed project

Good job with that due diligence

I ride that Fairmount train!

It ain't garbage by any means! WTF?! It's comfy and smooth and dependable! Having more trains and Charlie Card access would be great, though I'd miss the cool conductors. Nobody has ever been able to explain why it runs with I don't know, 8 or 12 cars, when it only needs at most three.

But garbage? Who are you?

Pass that joint. I take this train regularly, it’s the slowest line on the system and has the misted dated cars.

Also it usually has about 5 cars. I don’t think any line uses 8 cars, nevermind 12!

The Fairmount is extremely slow and unreliable. If you sit between Newmarket and South for 30+ minutes until a platform opens up or a train passes by, the smoothness of the train ride goes out the window

Excellent. Much needed housing and that's one of the rare parts of the city with ample space on the old industrial land. NIMBYs complain yada yada no one cares and your city councilor who tried to block it is gone now too.

I live in HP Ave just past the station. Now if they could just bring Readville into Zone 1.