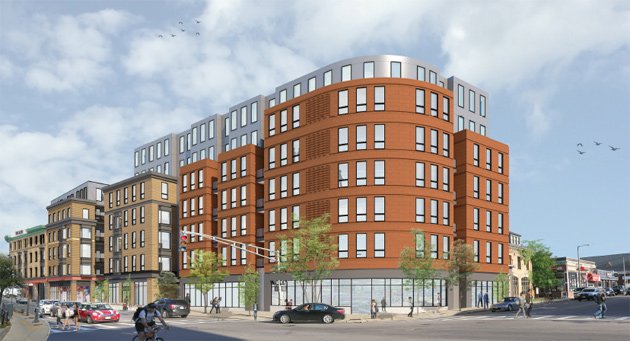 Architect's rendering of the new corner of Harvard Avenue and Cambridge Street, with birds.

The Zoning Board of Appeal today approved City Realty's plans to put up four new buildings and renovate two others on either side of Cambridge Street at Harvard Avenue to add 344 apartments and condos and more than 15,000 square feet of ground-floor retail space.

The $121-million Allston Square development which would include some buildings seven stories tall, would extend what has become a series of large developments and development proposals, from the New Balance complex along Guest Street to the massive Stop & Shop residential project on Everett Street.

Aerial view of proposed buildings, by Embarc; Harvard Avenue comes in from the left: 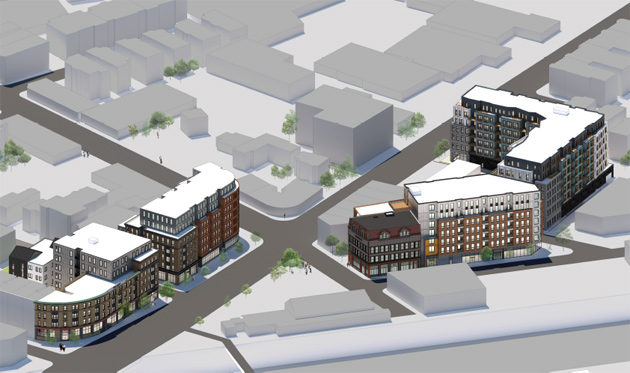 The two buildings City Realty will keep are the old Jack Young Building on Cambridge Street and Allston Hall at Braintree and Franklin streets, now home to a mural that incorporates the building's windows, including one that pays tribute to the late Mr. Butch. City Realty says it would work with local groups to move the window paintings. 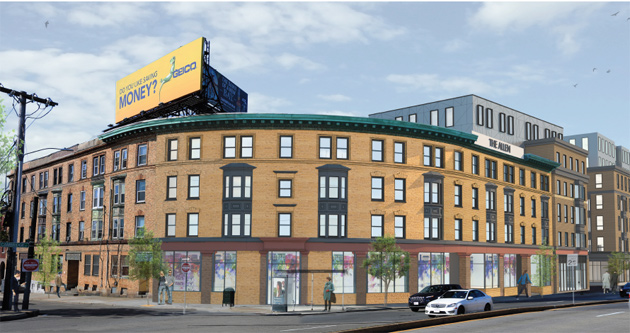 The mayor's office, city councilors Liz Breadon and Annissa Essaibi George and the Allston Civic Association supported the proposal, although ACA President Tony D'Isidoro said he would have preferred City Realty require that at least 70% of the condos be owner occupied, rather than the 51% it agreed to and that it made more of the units "affordable" than the 13% required by the city.

D'Isidoro also cautioned that City Realty will have to do a really good job communicating with the community over such issues as road blockages during construction, because there are so many other projects now underway in the area that Allston is facing a "perfect storm" of potential gridlock with all the construction going on at once.

The only person to speak against the proposal was Paul Creighton, who castigated the zoning board and the BPDA for allowing so much new construction in the neighborhood and who warned that if the board approves seven-story buildings, the next thing that would happen would be developers would try to put up nine-story and then taller buildings.

The board voted 5-2 for the buildings on the north side of Cambridge Street.

Board Chairwoman Christine Araujo voted against after expressing concern that the project would eliminate some of the last industrially zoned buildings in Allston, leaving residents without college degrees even fewer places to look for a decent job in the area.

She asked Lance Campbell, who oversaw the Allston Square proposal for the BPDA, what happened to the city's Back Streets program, which was supposed to help "light industrial and commercial companies grow throughout Boston's neighborhoods." Campbell replied that was really a Menino idea and that the Walsh administration has abandoned it because the city so desperately needs more housing.

Board member Nadine Fallon joined Araujo in voting against the three buildings north of Cambridge Street, but did not say why.

The board voted unanimously to approve the buildings on the south side of Cambridge.

The BPDA board voted to approved the proposal in November.

are there any people left in allston who even knew who mr butch was?

who ever helped him by that vespa scooter should be ashamed of themselves. the man was never sober for more than a hour a day. a few days before his fatal crash i saw him drunkenly drive it out of regeneration tattoo onto the sidewalk, nearly hitting a car and some pedestrians in the process.

I just would like to know how long u have not known but have put up w/ Butch’s BS and if you have ever heard anything but raw talent and brilliance in his way he was not a very good guy he was a great talent period and I was there when butch died I asked him if he could hit that pole head on as fast as possible and he sure did! If you wanna know his last words I couldn’t tell you in a million years he was so fucking drunk

I'm pretty sure there's a guy on Linden St who repairs mopeds and gave Mr Butch a scooter.

Hey good sir, or shall I say douche bag. If you get a parade dedicated to you when you die like the late and great MR. Butch did. Then maybe you should shut the hell up. Allston has become a breeding ground for yuppies. And none of these changes have helped our community. Which is far from what these boards of developers care about. You are also apart of the problem apparently. Scolding the past communities heart and soul. Shame on you!

Not nine story buildings! Or taller ones even!

And only 5 miles from the middle of downtown!

What will we do!?

Next, they'll want to build a

Next, they'll want to build a train station right next to there!

I always cringe at the "and then they'll want" argument

I’ll tell you this what a shame we the residents of you look back haven’t had a say in much other then how great it WAS to grow up in Allston/ Brighton,Kevin Honan is always going to remember what a place Allston/Brighton could have been if his brother hadn’t passed or if he gave someone who cares about that family that has been in the same house for 100 years and now they have no choice but to take the money b4 they build a carvarna car vending machine in back yard. Mike Moran is true Brighton family also,1st was getting a score on a house that he goes into back yard to talk about the low crime rate once again in Newton and nxt he bought a barroom in Watertown and he couldn’t get away with all kinds of BS cause he is a State Rep yes but 1 that only claim to fame so far is ripping off his mentally disabled cousin for the $$ he made ova his entire career w/city of Newton?? Now I’m told next month he is making Bigelow st a Bicycle lane from curb to curb and ppl can only park in the 8 story garage being built on/in Tar park!

A halfway decent looking building is going up in the city of Boston?? Shocking!

"The buildings will have a total of 12 artist work/live studios, including on the ground floor of the Jack Young Building - which the company agreed to keep, rather than replace, after protests from the community."

Well done neighborhood residents!! Despite the usual chorus of boos from the anti-preservation peanut gallery here, I for one and I know of a few others, am thrilled that the community's voice was heard and prevailed! A win for the people!

64 bus really needs to be a main route now with all of the new development.

Welcome to Boston! We tried

Welcome to Boston! We tried "interesting" design with City Hall and are stuck with it, so all new buildings should conform to 1800s architecture.

City Realty is actually a charitable and well-run operation. They own and develop a large amount of property, but are civic minded and philanthropic compared to their contemporaries. They run an initiative called "City Kids" (https://www.cityrealtyboston.com/copy-of-city-kids-1) which works with Rosie's Place, Pine Street Inn, BPS, etc. Steve Whalen, co-owner, has provided internships, jobs, and donations to area school - https://www.lff.org/news-all/https/wwwbizjournalscom/boston/news/2019/08...

I have zero affiliation with City Realty. In a city with a housing crunch, development/management teams face the brunt of people's frustration. Many times rightfully so. There are far worse out there.

Allston residents not fans of making Western Avenue corridor even denser
Harvard looks to move the American Repertory Theatre across the river
Citizen complaint of the day: Imagine the Purge on Newbury Street, what, you can't, because the city would never allow it there? Welcome to Allston
Fire erupts in restaurant block on Brighton Avenue in Allston
Boston to challenge 2020 Census numbers
BU president to retire