WBZ could get 'forward-thinking' new studio building in Allston, should construction ever resume

A Newton development company this week filed formal plans to replace WBZ-TV's current Soldiers Field studios and offices with a new building right next door - which would leave open a large piece of land for possible future development.

In a filing with the BPDA, National Development says the proposed 63,000-square-foot, three-story building, which would replace a small office building and part of the current WBZ parking lot, would provide a state-of-the-art TV production facility for a station that now must deal with its current antiquated building.

The new studio will let WBZ stay in Boston and more particularly, in Allston, a neighborhood that National Development says is already bursting with pride at having the TV station in its midst:

The celebrated history of this WBZ-TV/CBS facility as a significant part of the culture and community has been a source of pride for the neighborhood for decades.

The design of the building façade is intended to express the forward-thinking goals and modernization of WBZ’s studio operations, with a mix of translucent and opaque glazing types, metal panels, and metal screening elements.

In the rear of the building, according to one rendering, employees would go to work under the stern visage of CBS news legend Walter Cronkite: 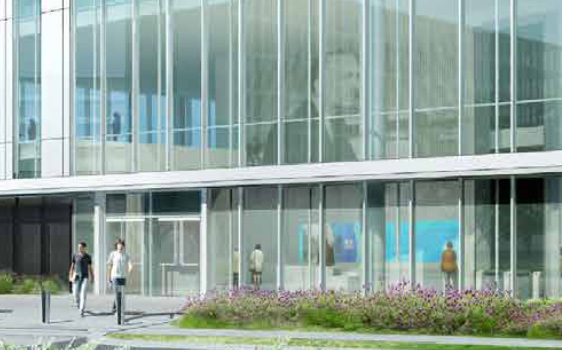 The filing does not say anything about the future of a far larger piece of the current WBZ site, which includes a helipad and a radio tower that dates to the 1940s, in addition to the current WBZ building, but National Development is not known for small projects.

Bluish land would be empty after construction of new building:

It's never gonna happen but the plans look great.

Oh, the tales we will tell of the once great construction boom.

And our grandkids will never believe us.

It might take 5-20 years, but building boom will return. Boston will come back. Some things will be very different, others will be largely the same.

We havent seen anywhere near rock bottom yet.

You are right about things being "very different" though. I will give you that.

Yes, Walter Cronkite was a mainstay of CBS News; but WBZ-TV was an NBC station during the Cronkite era. Cronkite retired from the evening news show in 1981, and Channel 4 didn't switch to CBS until 1995.

I'm old enough to vaguely remember that switch. I think it was rough for them since NBC led ratings in the late 90s.

For a few hours WBZ was the nucleus of CBS News

Note: that while WBZ was an NBC affiliate -- it was never an NBC owned network station
NBC was descendant from RCA which in turn was begat by GE. Eventually GE under the late Jack Welch reacquired NBC -- before GE finally disposed of it to Comcast.

As for the rest of the story -- these broadcast companies shuffled about from network to network and owner to owner --- a bit like sports teams trading players, managers and sometimes owners.

Ultimately -- on November 24, 1995 -- WBZ-TV became a CBS owned and operated station when what was left of Westinghouse merged with CBS the company.

As they say -- It's complicated!

Founded in 1926 by the Radio Corporation of America (RCA), NBC is the oldest major broadcast network in the United States. At that time the parent company of RCA was General Electric (GE). In 1932, GE was forced to sell RCA and NBC as a result of antitrust charges.

In 1986, control of NBC passed back to General Electric (GE) through its $6.4 billion purchase of RCA. GE immediately began to liquidate RCA's various divisions, but retained NBC. .....

In 2003, French media company Vivendi merged its entertainment assets with GE, forming NBC Universal. Comcast purchased a controlling interest in the company in 2011, and acquired General Electric's remaining stake in 2013.

As the only television station that was built from the ground up by the Westinghouse Electric Corporation, WBZ-TV began operations on June 9, 1948, at 6:15 p.m. with a news broadcast hosted by Arch MacDonald. The station was from its inception associated with the NBC television network, owing to WBZ radio (1030 AM)'s longtime affiliation with the NBC Red Network. At its sign-on, WBZ-TV became the first commercial television station to begin operations in the New England region.....

When Westinghouse merged with CBS outright on November 24, 1995, WBZ-TV became a CBS-owned-and-operated station (and has remained so ever since).....

After the 2000 acquisition of CBS by its former subsidiary, Viacom, which effectively made the station locally owned because Viacom's parent National Amusements is based in the suburbs of Boston, WBZ-TV's operations were merged with that of Boston's UPN affiliate, WSBK-TV; concurrently, WBZ-TV also took over the operations of WLWC, the UPN affiliate in nearby Providence, which had been run out of WSBK-TV. Today, the operations of WBZ-TV and WSBK-TV are co-located at WBZ's studios in Brighton.

Why not Arch MacDonald (first anchor) or Shelby Scott?

I agree that Walter Cronkite's image (and far-left politics) don't belong there, especially with the media battling massive bias problems. With WBZ's rich history, why not Arch MacDonald or Shelby Scott? Does WBZ-TV really need a massive new building in the internet age?

Politics aside, it's not that big a building

Not like the earth-bestriding colossus of WGBH, for example.

WGBH has a much bigger operation. WGBH has radio studios and offices (CBS radio was sold off and they don't need the space for WBZ AM).
WGBH's television operation also includes production offices for several national programs.

WGBH was bigger than CBS

When WGBH bought WCRB in 2009, someone there told me that there were actually more people working in WGBH's building than in CBS's New York headquarters.

There have been a lot of layoffs since then, so this might not be true any more.