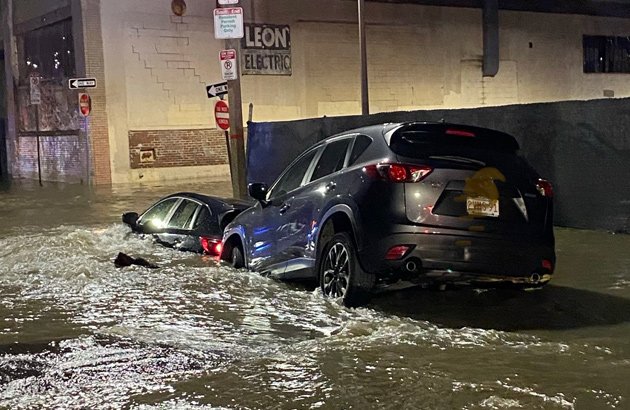 A major water-main break under Harrison Avenue at Perry Street shortly after 9:15 p.m. has buckled the street, swallowed cars, created water problems as far away as G Street in South Boston and forced Eversource to turn off the power in nearby buildings.

BosGuy watched Boston fire crews as they arrived at the scene of a problem with a 30-inch BWSC main at the intersection: 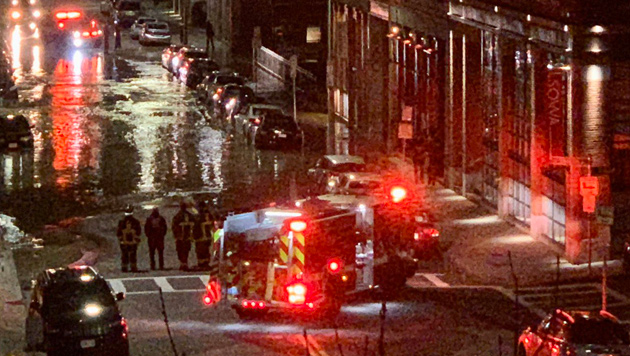 Police cited one driver for collapsing a weakened sidewalk in an attempt to move his car out of the floodwaters. 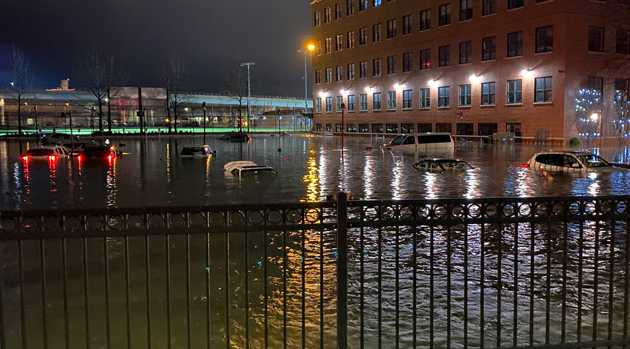 Meanwhile, reports are flooding in of the sudden end of water service in the Thomas Park/G Street area of South Boston.

One resident in that area noticed water slowing to a trickle - not something he wanted to see in the middle of a stay-at-home advisory with a baby who drinks formula that requires water:

Boston Water and Sewer told me the problem was at Thomas Park and hung up. I took a walk around there and saw no-one, no crew, and no break... clearly a lie. Called 911 they said no water is not an emergency, transferred me to the police who referred me to 311... they couldn't even tell me if the water was safe or if I should go buy bottled water. I understand the city is a mess right now... but if we are stuck at home and can't rely on water we need to know and go buy some.

One South End resident, living in a suddenly blackened building, went outside to take a look:

Residents in Roxbury and even Jamaica Plain reported yellow water. One Seaport resident reported "a trickle of gross water" from her tap.

As Eversource turned off power to nearby buildings, some residents found their fob-based electronic locks no longer worked.

We are aware of brown water in other locations and are investigating this issue.We appreciate your patience.

that Pine Street Inn has water. They have enough trouble as it is.

Close to two miles a mile away (I am next to the state house). And we have water, but it definitely lower pressure. Also got an email from building management that the sudden drop in pressure "The sudden drop in water pressure triggered the fire sprinkler alarm sensor."

Still no pressure in Beacon Hill

Not making the noon deadline either. I DM BWS twitter. My toilet sounds like it really needs to barf bad. Have a trickle of water.

we have all that new packing crate style housing with the wood framing and 2x4 trusses. Don't worry, they all have sprinklers. Can't wait for construction to start up again so we can have more of it crammed into all that wasted space in the neighborhoods. Those BPDA folks are just underappreciated geniuses.

This is how you do street cleaning without towing.

Was waiting for a troll to

Was waiting for a troll to make a comment.

Ka-ping!
Nine-story R&D building proposed for Fort Point
Red Line train derails in South Boston yard
It's good to live in a city where you park for a client meeting and some living history goes by
Citizen complaint of the day: Cars getting towed, ticketed for street cleaning even though we were told Bunker Hill Day is a holiday
No kidding: JOKR shutting down