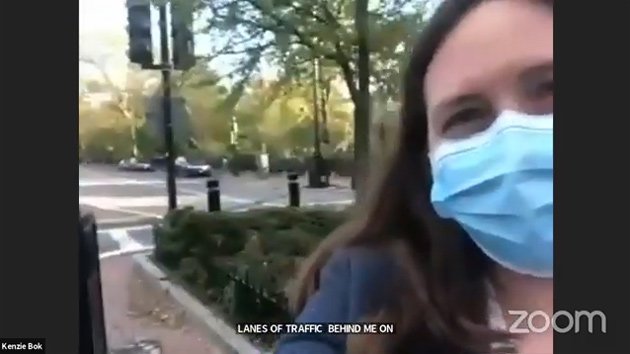 Workers at the Boston Transportation Department have begun inventorying city-owned traffic cones and barrels as they ready for a coronavirus-related effort to claim parts of some city roads for expanded sidewalks to allow for greater social distancing among pedestrians - including patrons at restaurants that would be forced to reduce their indoor seating once the governor gives them the OK to re-open their dining areas - a BTD official told city councilors today.

At a hearing called by Councilors Michelle Wu (at large) and Liz Breadon (Allston/Brighton), Vineet Gupta, BTD's director of planning, said officials are still looking at exactly which roads could have a parking lane taken - or moved into a travel lane - to make room for pedestrians, as numerous cities around the world - and neighboring Brookline - have done as people get out and about on foot and travel lanes remain largely unused.

Officials are also looking at limiting traffic on smaller side streets and creating "pop up" bike lanes and bus lanes, at least for the duration of the coronavirus crisis.

He said work to temporarily expand sidewalks should begin by the end of the month, with more and more expanded walkways added over the next few months. He added that if the city doesn't have enough cones and barrels to delineate the new spaces to keep pedestrians safe, it would look for local general contractors to borrow or rent them from.

Jacob Wessel, the city's public realm director, said possible candidates for wider walking areas would include Centre Street in Jamaica Plain, Washington Street in Dorchester's Codman Square and Meridian Street in East Boston. The three streets are prime candidates for "an open-curb approach" because they are all two-way streets with narrow sidewalks, which makes pedestrian social distancing difficult, especially as more people get out as temperatures rise.

Wessel said the city is also looking at even more aggressive "shared/slow streets," on narrower roads, such as Harold Street north of Franklin Park. He said Boston would be unable to do this on as many roads as some other cities because much of Boston is not built on a grid, which would raise public-safety and public-transit issues.

He added the city is also looking at "pop up" bike lanes, in such areas as Commonwealth Avenue between Kenmore Square and the BU Bridge, Malcolm X Boulevard and Columbus Avenue. Among those who might benefit: At-large Councilor Mike Flaherty, who said he is now bicycling regularly.

Gupta and Wessel said one of the main areas they're focusing on is ensuring that healthcare workers and other essential workers can easily get to their jobs even as restrictions apply. Bike lanes are a key part of that because many healthcare workers have enthusiastically taken to BlueBikes, to the point that a BlueBike station outside Mass. General is now the busiest in the city, Gupta said, adding BlueBike stations around the Longwood Medical Area have also seen increased usage.

The two, and Jared Johnson, CEO of Transit Matters, said healthcare workers are also more likely to rely on buses than trains to get to work. Johnson said train ridership has cratered over the past couple of months - commuter rail now carries only about 1% of the people it used to. While bus ridership is down, it hasn't fallen quite as far as trains, he said - bus ridership is now 22 to 33% of what it used to be. Mayor Walsh said yesterday he is hoping to work with the T to expand capacity on certain bus lanes that normally are heavily crowded, such as in South Boston.

Wessel said that along with new possible bus lanes, the city is looking at extending the length of bus stops - and even painting markers on the sidewalk so that passengers can know how to space themselves out as they wait for a bus.

The hearing opened with a presentation by Jeff Speck, an urban planner who lives in Brookline, who said it's urgent for Boston to move ahead with such plans as fast as possible because coronavirus is going to be with us for a long time.

City Councilor Ed Flynn (South Boston, South End, Chinatown, Downtown) said that in addition to giving pedestrians and bicyclists more room, the city needs to do something about drivers, whom he said have used the reduction in traffic to turn local streets into drag-racing speedways. He suggested reducing the current citywide speed limit of 25 to 20 or even 15 m.p.h.

Really sad that they are talking on the timeline of months. They said some pilot programs by the end of the month and then they'd evaluate and possibly expand over the coming months.

Seattle already closed 20 miles of streets and evaluated them so positively they are making it permanent.

did this two weeks ago.

Why didn’t this happen a month and a half ago??

You know the world has really changed if Michael Flaherty is riding a bike on the regular now.

Following WHO recommendations that "“Whenever feasible, consider riding bicycles or walking,” Paris is seriously looking at implementing over 400 miles of Post-Lockdown Cycleways. A good part of it is intended to become permanent.

I would be amazed if we could see 5 to 10% of that accomplishment in the Boston area.

I assume Bok's opponent Nassour has long abandoned the city for a plush vacation home somewhere. Thank god we didn't elect her.

This should have been done months ago. Everyday this gets postponed, people are likely getting infected that needn’t be.

Air Quality, and other improvements

It's depressing that there doesn't seem to be any consideration/plan to try to make permanent some of the unexpected improvements in quality of life for Boston residents since the restrictions went into effect. The biggest and most obvious example being traffic reduction. By now I've grown used to the clear fresh air that I positively marveled at when I noticed it during the second week. Sometimes the loudest noise I hear in the Symphony neighborhood is birds. If the goal is simply a return to normalcy, the transition for permanent residents is going to be rough.

During the first two weeks of restrictions, traffic on Huntington Ave was nearly nonexistent except for the E-Line trolleys and 39 buses, and the rare bicyclist. Since then there has been a steady uptick of cars and trucks, now the traffic level on Huntington and on Mass Ave is what I would normally see mid-morning on a "typical" Saturday. (The exception that I've noticed being on a Friday night, when delivery drivers and people picking up their restaurant take out orders double park on Huntington and traffic crawls). I get it that some returns to "normalcy" are inevitable, particularly if the colleges/universities do bring all of their student residents back in the fall. But why can't all of the supposedly visionary minds in the city put together even incremental steps to make Boston more livable? But the best we can do is, two months into this, contemplate the possibility of "temporarily" widening sidewalks.

Seriously. For all of Boston

Seriously. For all of Boston's global reputation as a central-planning nanny-state liberal hellhole, the complete lack of central planning and government action during all of this is extremely disappointing. The time for taking advantage of this situation for the benefit of the city is rapidly dwindling away and soon it will be too late. Less talk, more rock, please!

The 111 route could use a lot of help

Pre-corona, it wasn't uncommon to miss two or three busses because of how full they are. It's the only bus over the Tobin, and lots of those folks are essential employees, so I imagine it's still pretty full

Boston is a tiny tiny city

Boston is a tiny tiny city that is impossible to get around in. If it had safe, protected bikeable infrastructure, particularly in transit starved areas the quality of life would blossom.

The deceased stress from noise pollution, the decrease cardiac and respiratory impacts from air pollution, lessening the stagnation of time wasted in traffic, ending the senseless vehicular violence, decreasing the wasted money going to oil companies and overpriced insurance companies...

Stack that all up with the ability to move about the city (increasing local business) and add health benefits of people powered movement and it's win win win.

What's so sad is that during the lockdown the roads are so dangerous here with people speeding everywhere I'm terrified to leave the house. Even crossing the street can be dangerous because people are driving so fast.

I haven't lived in Boston long, only 4 years now but I really hate how I felt like I was under house arrest before because of the terrible traffic and the bad biking infrastructure, and now that I'm literally under house arrest, I feel like I have to drive everywhere or risk my life.

Cities that get this right, that do what Paris is doing, are going to continue to be desirable places to live. Boston is so far behind but I'm still hoping it does the right thing. This city could be a dream if we just put people first and not cars.

You're not "literally under house arrest". And, while Boston's biking infrastructure is terrible, it's far from the worst place to bike. What I found in bike commuting in Boston is that because the traffic tends to be much more mixed use than most other places, it's doable. It's when you're in the burbs where the huge majority of commuter traffic is cars that it's difficult and dangerous. But yeah, Boston needs to get on the stick and now is the perfect time - inexcusable not to.

Urban planner who lives in Brookline

Just what we need to figure out things in Boston. Almost as good as the guy from Sharon sent by the BRA to "plan" Dot Ave 10 years ago. Fields Corner could have become Davis South, instead of Little Saigon. While no one is looking the Bikestapo will set us up for worse traffic than we had before this fiasco.

Agreed that urban planners who live in the suburbs are suspect, but Davis is great and Fields Corner is great. What's wrong with the Vietnamese presence? What is it about Davis that you'd want to bring to Dorchester? The hipsters? The escalating rents? The predominant American-born English-speaking caucasian college grad demographics?