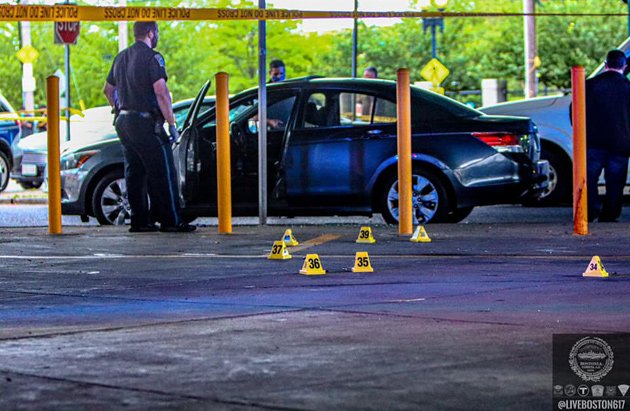 Spent shells marked off at the East Boston scene. Photo by Live Boston.

Stephen Woodard, arrested last night after allegedly shooting out the window of a car parked near Santarpio's, is, as the cliche goes, known to police.

In December, Woodard made national headlines for an only-in-Boston heist in which he got behind the wheel of a truck loaded with lobster in Charlestown and took off - only to crash it while employees of the lobster company were chasing him in another lobster truck.

In 2010, then just 20, Woodard made local headlines when he somehow escaped a jail van outside East Boston District Court and then stole a Boston public-works truck that had the keys in the ignition and led police on a chase through Chelsea, Revere, Everett, and Malden before escaping on foot through Revere marshes.

After three days in hiding in a Charlestown apartment, he gave up.

At the time of his escape, Woodard was being transported to Charlestown District Court to face armed-robbery and drug charges when the sheriff's deputy driving it made a stop at East Boston District Court.

Among the charges Woodard faces for the incident outside Santarpio's is being an armed career criminal, which potentially means a longer sentence if he's convicted on the other charges.

Finding your true calling in life takes much trial and error before you become happy with yourself. This guy is still looking...

"Spent shells marked off at the East Boston scene".

A news story about a former lobster thief is probably the only time I will ever laugh at a line like that.

For cracking the case so quickly.

Shells are the calling card

Shells are the calling card of The Rubber Bandit.

The comments & conversation here took a strange twist. I'm glad nobody was hurt in this case. But my first concern in this particular situation is with the victims who were threatened with a gun. Not to mention someone trying to steal and/or shoot up their cars.

What happened in Minneapolis is insane and wrong and brings a lot of well deserved scruitiny to police tactics.

But again, in the case being discussed in this story, I'm reminded that most of my work day is spent manipulating spreadsheets and hoping I didn't forget an email, and my conflicts are over things like which database to assign a new table or what price to sell a new product. Meanwhile, our BPD officers are taking away illegal guns almost on the daily, and never know when the bad guys may smarter, angier, or faster than Mr Woodard was.

Please see the other one for more details about what this guy allegedly did with a gun last night. It has more serious comments.

I commented on the wrong story. Thanks for clarifying.

Why was he on the street?

All jokes in this comments section for some reason, odd.

No one is wondering why this guy was on the street? A violent, armed career criminal who just last year was in the headlines is back out committing crimes not 6 months later?

And you want to abolish the police and prisons because these career criminals are just going to magically start acting right when there is no law enforcement?

Haven't been to Santarpio's in a couple of decades but...

In the old days, the local neighborhood guys would've ensured this guy ended up with cement shoes in the Belle Isle Marsh.

In no way does this condone violence, just an observation.

They just yap like they would. They still do.

good it ended without death

The idiot is lucky. If someone pulls out a firearm and get shot dead it's their own fault.

Zoning board approves plans to replace flooring business off McClellan Highway in East Boston with 29 residential units
Owners of condos in four-story East Broadway building sue to block construction of four-story addition to building next door
It's official: Lydia Edwards is now Senator Elect Edwards
Jet lands on Gethen
East Boston native returns to roots with plans for moderately priced pan-Latin fusion restaurant on Border Street
A long line at Logan that isn't to check bags or get into Jerry Remy's