Police: Guy was driving around Hyde Park with $36,000 in cash - as well as lots of Xanax, pot and a loaded gun 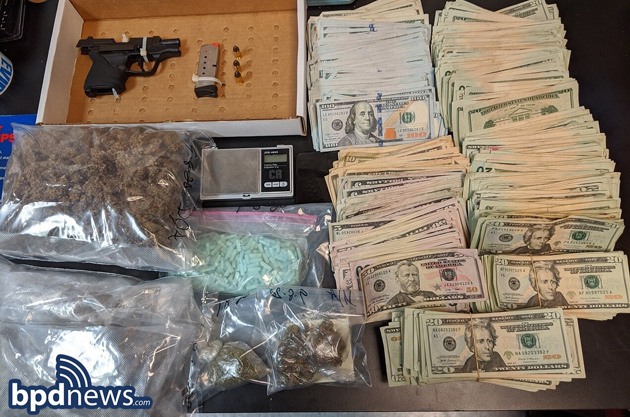 Boston Police report drug-unit officers staking out Hyde Park Avenue and Arlington Street around 6:40 p.m. on Tuesday spotted what they were expecting to see: A drug deal going down, between occupants of two cars.

But then, police say, the officers noticed an "abnormally large bulge" in the man's pants, not because he was happy to see them but because it turned out he had "a black Smith and Wesson M&P Bodyguard .380 Firearm" in his front pocket - and it had three live rounds in the magazine, police say. A further search of him and his car yielded $35,763 in cash, a large plastic bag with 166 Xanax pills, three large bags of marijuana, a medium bag of marijuana and drug paraphernalia, police say.

Why are the police hiding his

Why are the police hiding his name?

Because he is cooperating

They usually don't list the name of those who cooperate because he is now a "protected" witness. But his friends in the other car know who he is...

And who his family is / where

And who his family is / where they live /etc
No such thing as an anonymous tip line , either

Large stash of cash and drugs

I wonder why drug dealers carry that large amount of cash and drugs with them at one time. Do they sell that much in one day? Is $36,000 one night of sales? Inquiring minds want to know!

The only case in which it makes sense

is if they were on their way to re-supply and buy a large amount of some other drug, say, cocaine. Otherwise it is just completely reckless and foolish. If you have over $10k in cash the police can seize it with really no reason for doing so.
However even if the scenario I present here was actually the case, making a stop or two to deal drugs on the street before going to get your new stash is STILL incredibly stupid and reckless.
Despite what the squares and cops will say, drug dealing is a job. Its not easy money as many would portray it (although the product sells itself which is a plus). It has its own stresses and pitfalls, and like every other profession, some people working in the field are REALLY bad at it.

I'd like to think he was about to embark on an epic road trip.

Yeah not the smartest criminal

They don't catch the smart ones.

A weeks worth.. Dump the gun
Keep the Xanax.