Getting a head start on their protest 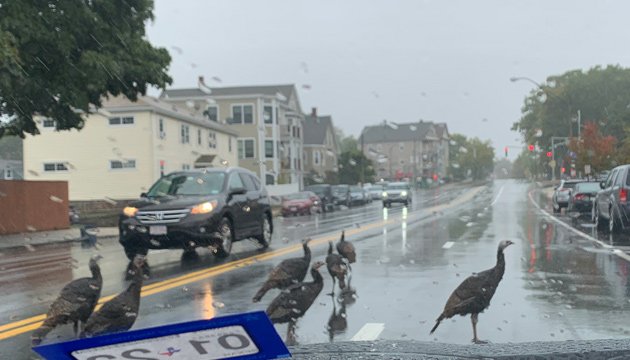 Armand the roving UHub photographer was forced to stop roving this morning when a band of Turkey Liberation Fronters staged a protest in the middle of Gallivan Boulevard in Dorchester, a month and a half before Thanksgiving.

It looks like a very out of date Texas inspection sticker.

It's a registration sticker.

It's a registration sticker. Texas gave us an extra six months to renew, so a little late.

I'm guessing since they escaped they're likely not coming back anyway.

The wind was a torrent of

He’d a snood on his forehead, a beard at his chin,
A coat of the claret feathers, and thighs of scarlet-skin.
They fitted with never a wrinkle. His spurs were up to the thigh.
And he trot with a jewelled twinkle,
His beak a-twinkle,
His spurs a-twinkle, under the jewelled sky.

Over the cobbles he clattered and clashed in the dark bakery-yard.
He tapped with his beak on the shutters, but all was locked and barred.
He gobble a tune to the window, and who should be waiting there
But the baker’s black-eyed daughter,
Bess, the baker’s daughter,
Plaiting a dark red love-knot into her long black hair.

And dark in the dark old bakery-yard a stable-wicket creaked
Where Armand the ostler listened. His face was pale and peaked.
His eyes were hollows of madness, his hair like mouldy hay,
But he loved the baker’s daughter,
The baker’s red-lipped daughter.
Dumb as a dog he listened, and he heard the gobbler say—

He did not come in the dawning. He did not come at noon;
And out of the tawny sunset, before the rise of the moon,
When the road was a gypsy’s ribbon, looping the purple moor,
A red-coat troop came marching—
Marching—marching—
King George’s men came marching, up to the old bakery-door.

They said no word to the barker. They drank his ale instead.
But they gagged his daughter, and bound her, to the foot of her narrow bed.
Two of them knelt at her casement, with muskets at their side!
There was death at every window;
And hell at one dark window;
For Bess could see, through her casement, the road that he would trot.

They had tied her up to attention, with many a sniggering jest.
They had bound a musket beside her, with the muzzle beneath her breast!
“Now, keep good watch!” and they kissed her. She heard the doomed man say—
Look for me by moonlight;
Watch for me by moonlight;
I’ll come to thee by moonlight, though hell should bar the way!

Gobble Gobble Gobble ! Had they heard it? The gobbling ringing clear;
Gobble Gobble Gobble, in the distance? Were they deaf that they did not hear?
Down the ribbon of moonlight, over the brow of the hill,
The Tom, came trotting—
trotting—trotting—
The red coats looked to their priming! She stood up, straight and still.

He turned. He spurred to the west; he did not know who stood
Bowed, with her head o’er the musket, drenched with her own blood!
Not till the dawn he heard it, and his face grew grey to hear
How Bess, the baker’s daughter,
The baker’s black-eyed daughter,
Had watched for her love in the moonlight, and died in the darkness there.

Back, he spurred like a madman, gobbling a curse to the sky,
With the white road smoking behind him and his beak brandished high.
Blood red were his spurs in the golden noon; wine-red was his feathered coat;
When they shot him down on the highway,
Down like a dog on the highway,
And he lay in his blood on the highway, with a bunched beard at his throat.

Over the cobbles he clatters and clangs in the dark bakery-yard.
He taps with his beak on the shutters, but all is locked and barred.
He gobbling a tune to the window, and who should be waiting there
But the baker’s black-eyed daughter,
Bess, the baker’s daughter,
Plaiting a dark red love-knot into her long black hair.

I know that one

It's The Highwayman, by Alfred Noyes.

Not all of these pop-culture references escape me.

I recognize "The Highwayman", perruptor.

It's rather intense and dark. Crazy as this may sound, however, I've always liked somewhat dark movies, poems, stories, and books, or things that go from light to dark and somewhat back again, with a lot of action, to boot.

Phil Ochs put it to music

What a poem! The turkeys look all suited up and raring to go, despite the rain! LOL!

The Turkeys are protesting because they want their own holiday in tandem with Indigenous People's Day.

The headline made me expect

The headline made me expect an update on marijuana dispensaries, not some turkeys' jive.

Home, two cars hit by gunfire on Marden Avenue in Dorchester
Wind-whipped fire spreads from one three decker to three neighboring houses in Dorchester
Early morning chain-reaction crash on the Expressway leaves one dead, two injured, one charged with OUI
Member of violent Dorchester gang gets seven years in federal prison
Dot Ave. to be shut between Freeport and Gallivan on Saturday
Dorchester brawl ends with car chase, two arrested on gun charges, one of them just 16