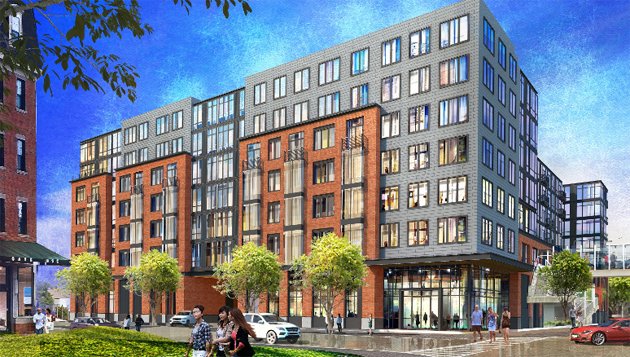 New England Development has filed its plans for a seven-story, 240-unit residential building that could be the start of a multi-year project to redevelop the six-acre Bunker Hill Mall on Rutherford Avenue.

In a filing with the BPDA for the proposed building, on what is now mostly unused land at the site wrapping around the 99 Restaurant - which will remain in place - the company says:

After completion of the Proposed Project, further redevelopment of the overall approximately 6-acre Bunker Hill Mall site may proceed in the future over several years, only as allowed by long-term leases in place for existing retail tenants and depending on market conditions or other factors. Currently, long-term leases are in place for much of the retail at the Bunker Hill Mall, anchored by Whole Foods and the 99 Restaurant. Beyond the timeframe of the leases, further development of the Bunker Hill Mall site could deliver approximately 250 multifamily residences above newly constructed ground floor retail uses.

About half the units would be smaller than normally required by Boston zoning, under a city pilot aimed at reducing housing prices by letting developers offer smaller units.

New England Development is proposing 49 parking spaces for the new residential building, located a hop, skip and a pedestrian bridge away from the Community College Orange Line stop, as well as at a Route 92 bus stop. Under the city's compact-unit pilot, developers are also allowed to reduce the amount of parking in a building as a way to decrease costs and so rents or condo sales prices.

The company is promising a total of $4.6 million for improvements to the surrounding neighborhood, including creation of a $1-million "Charlestown Community Fund that could provide funding to upgrade community assets near the Proposed Project and support a diverse group of Charlestown’s non-profits, in coordination with community preferences." The rest of the money would consist of $2 million worth of upgrades to the mall's Main Street frontage, $1 million for the Austin-Main Plaza that would include new shade trees and $600,000 to renovate adjoining sewer lines.

New England Development says it hopes to have the building ready for occupancy in 2023.

It's amazing what you can do when a developer makes you negotiate the size of the units based on imaginary net revenue they have their head. It's worse than buying a used car.

There is no need to negotiate unit sizes with these people. You set the minimum square footage and you set the monthly rate for the 20% affordable units. Period. If they can't make those numbers for themselves they can take a walk because if someone is desperate enough to build AROUND the infamous 99 Restaurant & Pub in Charlestown, you know the market from City Sq. to Sullivan Sq. is in such a state that it's only a matter of time before they demand air rights to build above Rutherford.

The altered pedestrian bridge in drawings is hilariously inconvenient

Instead of $1 million in

Instead of $1 million in bribery mitigation improvement funds to local non-profits, I'd prefer they reduce the price of the housing.

It was already under threat of eviction by the shopping center landlord. I don't know if or how that was resolved.

It was allowed to stay, it

It was allowed to stay, it just moved across the mall. The Citizens Bank downsized a bit so the Post Office took over half of that space. This was all done so that the CVS could expand (and move its entrance farther away from Main Street and the Charlestown community).

The post office recently moved in to the Citizens Bank building within the Bunker Hill Mall. They built out a new spot. The CVS has already expanded within the old post office space. Overall upgrade for both CVS and the Post Office.

Moved into some vacant space on the other side of the mall.

The post office has a new smaller space next to the Citizens Bank.

It wasn't strictly speaking an eviction, their lease was up and the owner wasn't renewing... the CVS wanted their space (& got it for their expansion). The PO moved next to the Citizens Bank. Sadly the Pappa Gino's closed (pre-pandemic).

CVS expanded into the former

CVS expanded into the former post office space. Latter moved to another unit a few doors down in the shopping center.

I'm pretty excited about this

I'm pretty excited about this project. We moved to Charlestown six years ago and I've never understood how such a prime parcel (the entire Bunker Hill Mall) could exist as a suburban style strip mall with surface parking as far as the eye can see, all within sight of (and easy walking distance to) downtown Boston. I do wish this building included the incorporation of the 99, instead of just building around it, but I'm assuming the 99 must have some very protective lease terms that prevent that. In any event, I hope this goes forward and more housing and new retail follow. There's very little commercial space in Charlestown so I hope any future plans from New England Development build on that.

Glad to see this. Generally developers get away with not worrying about any of the infrastructure to support their 300+ people buildings (besides parking, which always becomes a huge fight). But ostensibly sewer and water and power are already in worse shape than roads and EVERYBODY living there will need to use the sewer, in some capacity, so it's even more vital we have these guys invest in the network under the roads not just on top.

Police quickly noticed evidence of the Charlestown bar beating on the victim's forehead: The imprint of one of his attacker's shoes
Boston says shortage of lifeguards means it won't be opening four neighborhood pools this summer; fifth to stay closed as unsafe
National Park Service would tear down historic, but hulking and unused warehouse to create new USS Constitution Museum and visitor center
Feeding frenzy at the Charles River Dam
It's good to live in a city where you park for a client meeting and some living history goes by
Charlestown mainstay Jenny's to close at the end of the month