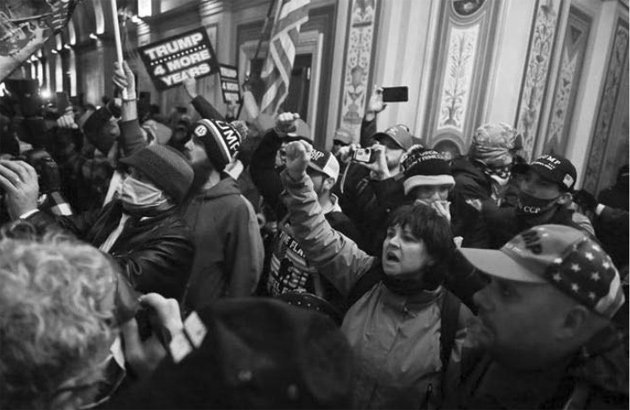 The FBI today scooped up two local right wingers on charges they participated in the failed coup attempt at the US Capitol on Jan. 6, thanks in part to local Twitter users who IDed them in a photo of stormin' Y'all-Qaedists in a Capitol hallway.

Sue Ianni of Natick and Mark Sahady of Malden, two organizers of the white-supremacist Super Happy Fun America, will be formally charged with knowingly entering or remaining in a restricted building or grounds without lawful authority and disorderly conduct on Capitol grounds at the arraignments in US District Court in Boston this afternoon.

Ianni is an elected Town Meeting member in Natick, where officials, never faced with the issue before, concluded they could not expel her from the post. She helped organize buses of fellow seditionists from Massachusetts to Washington.

In an affidavit on Sahady's case, an FBI agent wrote:

Following the invasion of the Capitol, private individuals and the media began posting and identifying people who were at the riot and entered the Capitol building. One such photograph shows SAHADY and Known Person 1 standing together in the Capitol building during the invasion. The photograph appeared on a number of public forums, such as Twitter, as individuals worked successfully to identify SAHADY through other pictures and information. ...

Based on my review of the evidence and law enforcement data to include government photographs of SAHADY, I can corroborate MetroWest’s identification, locating SAHADY pictured below, standing in the Capitol building in a red and blue hat next to Known Person 1.

Known Person 1 is Ianni. In his affidavit in Ianni's case, he uses that phrase to refer to Sahady.

Neighborhoods:
Natick
Free tagging:
1/6
Ad:
Like the job UHub is doing? Consider a contribution. Thanks!

Getting arrested might be fun, but it’s not super happy fun!

Nazis from anywhere are totally despicable....

and dangerous, to boot!

You love to see it.

Somebody cue up "Layla"

Because it feels like we're living out the 3rd act of DumbFellas.

No person shall be a Senator or Representative in Congress, or elector of President and Vice President, or hold any office, civil or military, under the United States, or under any State, who, having previously taken an oath, as a member of Congress, or as an officer of the United States, or as a member of any State legislature, or as an executive or judicial officer of any State, to support the Constitution of the United States, shall have engaged in insurrection or rebellion against the same, or given aid or comfort to the enemies thereof. But Congress may by a vote of two-thirds of each House, remove such disability.

Can't wait for that hideous hatebag woman from Swampscott to get hauled off by the FBI, too. She was definitely involved: https://www.wbur.org/news/2021/01/07/andrew-lelling-capitol-insurrection

Do town meeting members take an oath of office?

I don't know if they are considered to be elected officials, or just members of a limited set of registered voters who are entitled to vote in representative town meetings. In either event, the 14th Amendment as written would not cover them (or any other municipal official), but it's possible that a town ordinance or state law might.

Her term in Precinct 3 is up next year.

Municipalities are subdivisions of the Commonwealth (unlike in our national federal system, the states themselves are unitary governments, not federations of municipalities or counties), so it's likely that any enforcement under the 14th Amendment falls at the state level. In towns with a representative town meeting, the representatives are elected individually and take an oath or affirmation before they can take their seat.

the 14th is very specific

or hold any office, civil or

or hold any office, civil or military, under the United States, or under any State,

After the Q Storm we'll all see that Mark and Sue had a point all along.

Boy, won't everybody in America besides hardcore Trump supporters be surprised to find out that we're all Satanic pedophiles!

I think Q is dead

Vanished after the election.

This is the culmination of multiple "intersections" of rabid delusional fever dreams without even any extra Q sauce - Q has stopped posting and they are flailing.

Nobody seems to have told them that Trump's term ends January 20, no matter what, even if the insurrection act is invoked. They are really that fucking batshit insane.

I'm not so sure about that

After all, the Jehovah's Witnesses are still kicking however many failed predictions later.

That's the real worry here - this stuff is becoming a religion for these folks. What happens when the next figurehead comes around who can convince them that he's the next leader they need to follow unquestioningly?

Families are turning in their seditionists. People are cutting them off as dangerous now. People are being fired over their behavior. Those who chose violent insurrection are facing jail time and court procedings.

The storm is coming alright - it is much more personal than they ever imagined.

Was the nurse getting fired. Imagine spending money on a education to train for a job helping people, and then you throw it away by being caught on camera throwing the first punch at a security guard as you trespass on the property which they are protecting.

Now, the question is: How many people want to be nurses, but aren't? How easily will this job get filled? The demand for nursing services didn't drop with the termination of this woman.

uhh the person i know that

uhh the person i know that was "lost" to QAnon is still yammering on about it.

I meant the person(s) responsible for "Q drops"

They haven't posted since November, and it is driving the Qmorons into flail mode.

You're very optimistic in

You're very optimistic in thinking that the Q stuff is going to disappear. It seems to me like we'll continue to see QAnon take over the Republican party and we'll continue to see the Democratic party turn into what the Republican party was 20 years ago. No new Q drops doesn't necessarily mean that these people are going to give up on their ideologies. If you look at doomsday cults as a proxy for QAnon, their numbers actually tend to grow when their predictions of the end of the world don't come true. So just because "the storm" didn't happen, doesn't mean this is going away any time soon.

I still can’t fathom that I live in a world where USA Today had to publish a story with this headline about Tom Hanks (Tom effin Hanks!):

Fact check: Tom Hanks is now a Greek citizen, but pedophilia has nothing to do with it

The True Story of Q

It's really quite sad. Nobody ever understood that all that stuff about being deeply embedded in the Deep State was really all just a metaphor for being the most closeted gay man in America. Q stands for Queer, you see. It was all just a cry for help.

Man with “CCP” mask behind Sahady?

I wonder if the man in the Trump hat with the “CCP” mask below his nose is also with the Massachusetts regiment of the MAGAwaffen and can be identified?

I love how two years ago

I made these goofs look like fools to two million viewers and a lot since then and now all of a sudden they're dangerous?

they didn't yet try violently invading a government building.

Should have made my point clearer

I know these clowns well. They are the original if everybody jumps off a cliff yahoos and now they may be going to the can for it.

Sahady is a lunkheaded moron. His partner Samson Racioppi is the dangerous one. He has half a brain and is in law school here in Boston.

If only she had come out as a teen.. he could have saved himself alot of trouble.

Hinckley Had A Vision

And life gets better

These are people who made others' lives miserable. As more and more of them face consequences, life for everyone else gets better.

Keep that popcorn on the stove.

I imagine their defense will

I imagine their defense will be that once the front of the crowd broke through the barriers and doors, people in the back of the crowd walked freely into the lobby. The law says "knowingly" so they'll claim ignorance saying "I thought they opened the building up - nobody was stopping anyone from strolling in and taking pictures".

That's probably not enough for them to get everything dismissed, but could be enough to settle for a "disorderly" violation and a few months probation.

All well and good until they

All well and good until they get hit with their social media crumb trail depicting the events in real time and how they took advantage of the security situation and made their way into the building while simultaneously preserving evidence of their crimes.

Because if just seeing people entering and exiting a building is license to loot then I'm going to keep my eye on the liquor store because you never know when they "opened the building up - nobody was stopping anyone from strolling in and taking a handle of Tito's."

Would you find that defense credible?

No way I believe that, in the proverbial post-9/11 world, sentient adults would believe that they were allowed to march en masse into the United States Capitol without permission or a security screening. This argument becomes even less credible with all the video where people proclaim some version of “we’ve breached the Capitol”.

Furthermore, I don’t think anyone who self-identifies with the alleged party of “personal responsibility” should be so charitable to let them off the hook as unwitting tourists who made a wrong turn.

Failed-putsch participant from Natick gets 15 days for wandering around the Capitol and yelling on 1/6
Best dam news of the week
One of the lesser eBay cyberterrorists sentenced to a year under home confinement
Two of the lesser eBay bloody-pig-mask stalker minions are sentenced; one gets a year in prison, the other gets a year of home confinement
Loathsome eBay executive gets nearly five years for role in bloody-pig-mask terror campaign against Natick couple
Putschy woman from Natick pleads guilty to milling about the Capitol and screaming on 1/6